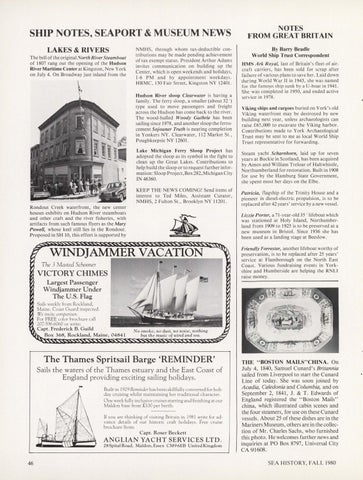 SHIP NOTES, SEAPORT &amp; MUSEUM NEWS LAKES &amp; RIVERS The bell of the original North River Steamboat of 1807 rang out the opening of the Hudson River Maritime Center at Kingston, New York on July 4 . On Broadway just inland from the

NMHS, through whom tax-deductible contributions may be made pending achievement of tax exempt status. President Arthur Adams invites communication on building up the Center, which is open weekends and holidays, 1-6 PM and by appointment weekday s. HRMC, 130 Fair Street, Kingston NY 12401. Hudson River sloop Clearwater is having a family. The ferry sloop, a sma ller (about 32 &#39;) type used to move passengers and freight across the Hudson has come back to the river. The wood-hulled Woody Guthrie has been sa iling since 1978, and another sloop the ferrocement Sojouner Truth is nearing completion in Yonkers NY. Clearwater, 112 Market St., Poughkeepsie NY 12601. Lake Michigan Ferry Sloop Project has adopted the sloop as it s symbol in the fight to clean up the Great Lakes. Contributions to help build the sloop or to request further information: Sloop Proj ect, Box 282, Michigan City IN 46360. KEEP THE NEWS COMING! Send items of interest to Ted Miles, Assistant Curator, NMHS, 2 Fulton St., Brooklyn NY 11201.

Rondout Creek waterfront, the new center houses exhibits on Hudson River steamboats and other craft and the river fi sheries, with artifacts from such famous flyer s as the Mary Powell, whose keel still lies in the Rondout. Proposed in SH 10, this effort is supported by

NOTES FROM GREAT BRITAIN By Barry Beadle World Ship Trust Correspondent HMS Ark Royal, last of Britain&#39; s fleet of aircraft carriers, has been sold for scrap after fail1ure of various plans to save her. Laid down duriing World War II in 1943, she was named for the famous ship sunk hy a U-hoat in 1941. She was completed in 1950, and ended active service in 1978. Viking ships and cargoes buried on York&#39; s old Viking waterfront may be destroyed by new building next year, unless archaeologists can raise ÂŁ65,000 to excavate the Viking harbor. Contributions made to York Archaeological Trust may be sent to me as local World Ship Trust representative for forwarding. Steam yacht Scharnhorn, laid up for seven years at Buckie in Scotland, has been acquired by Amos and William Treloar of Haltwhistle, Northumberland for restoration. Built in 1908 for use by the Hamburg State Government, she spent most her days on the Elbe.

Patricia, flag ship of the Trinity House and a pioneer in diesel-electric propulsion, is to be replaced after 42 years&#39; service by a new vessel.

Friendly Forrester, another lifeboat worthy of

prese rvation, is to be replaced after 25 years&#39; service at Flamborough on the North East Coast. Variou s fundraising events in Yorkshire and Humberside are helping the RNLl raise money.

The Thames Spritsail Barge &#39;REMINDER&#39; Sails the waters of the Thames estuary and the East Coast of England providing exciting sailing holidays. Built in 1929 Reminder has been skillfull y co nverted for holiday cruising wh ilst mainta ining her traditional character. One week full y inclusive cruises start ing and finishing a tour Maldon base from ÂŁ1 00 per berth. If you are thinking of visiting Britain in 1981 write for advance detai ls of our historic craft holidays. Free cruise brochure fr om: Capt. Roser Beckett

THE &quot;BOSTON MAILS&quot;CHINA. On July 4, 1840, Samuel Cunard&#39;s Britannia sailed from Liverpool to start the Cunard Line of today. She was soon joined by Acadia, Caledonia and Columbia, and on September 2, 1841, J. &amp; T. Edwards of England registered the &quot;Boston Mails&quot; china, which illustrated cabin scenes and the four steamers, for use on these Cunard vessels. About 25 of these dishes are in the Mariners Museum, others are in the collection of Mr. Charles Sachs, who furnished this photo. He welcomes further news and inquiries at PO Box 8797, Universal City CA 91608. SEA HISTORY, FALL 1980