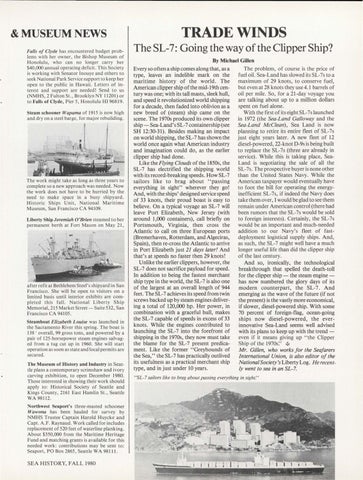 &amp; MUSEUM NEWS Falls of Clyde has .encountered budget problems with her owner, the Bishop Museum of Honolulu, who can no longer carry her $40,000 annual operating deficit. This Society is working with Senator Inouye and others to seek National Park Service support to keep her open to the public in Hawaii. Letters of interest and support are needed! Send to us (NMHS, 2 Fulton St., Brooklyn NY 11201) or to Falls of Clyde, Pier 5, Honolulu HI 96819. Steam schooner Wapama of 1915 is now high and dry on a steel barge, for major rebuilding.

The work might take as long as three years to complete so a new approach was needed . Now the work does not have to be hurried by the need to make space in a busy shipyard. Historic Ships Unit, National Maritime Museum, San Francisco CA 94109. Liberty Ship Jeremiah O&#39;Brien steamed to her permanent berth at Fort Mason on May 21 ,

after refit at Bethlehem Steel&#39;s shipyard in San Francisco. She will be open to visitors on a limited basis until interior exhibits are completed this fall. National Liberty Ship Memorial, 215 Market Street - Suite 532, San Francisco CA 94105. Steamboat Elizabeth Louise was launched in the Sacramento River this spring. The boat is 138 &#39; overall, 99 gross tons, and powered l;&gt;y a pair of 125-horsepower steam engines salvaged from a tug cut up in 1960. She will start operation as soon as state and local per mi ts are secured. The Museum of History and Industry in Seattle plans a contemporary scrimshaw and ivory carving exhibition, to open December 1980. Those interested in showing their work should apply to: Historical Society of Seattle and Kings County, 2161 East Hamlin St., Seattle WA 98112. Northwest Seaport&#39;s three-masted schooner Wawona has been hauled for survey by NMHS Trustee Captain Harold Huycke and Capt. A.F. Raynaud . Work called for includes replacement of 520 feet of waterline planking. About $350,000 from the Maritime Heritage Fund and matching grants is avai lable for this needed work: contributions may be sent to: Seaport, PO Box 2865, Seattle WA 98111 .

TRADE WINDS The SL-7: Going the way of the Clipper Ship? By Michael Gillen Every so often a ship comes along that, as a The problem, of course is the price of type, leaves an indelible mark on the fuel oil. Sea-Land has slowed its SL-7s to a maximum of 29 knots, to conserve fuel, maritime history of the world. The but even at 28 knots they use 4.1 barrels of American clipper ship of the mid-19th cenoil per mile. So, for a 21-day voyage you tury was one; with its tall masts, sleek hull, are talking about up to a million dollars and speed it revolutionized world shipping spent on fuel alone. for a decade, then faded into oblivion as a With the first of its eight SL-7s launched new breed of (steam) ship came on the in 1972 (the Sea-Land Galloway and the scene. The 1970s produced its own clipper ship-Sea-Land&#39;sSL-7 containership (see Sea-Land McClean), Sea Land is now planning to retire its entire fleet of SL-7s SH 12:30-31). Besides making an impact just eight years later. A new fleet of 12 on world shipping, the SL-7 has shown the world once again what American industry diesel-powered, 22-knot D-9s is being built to replace the SL-7s (three are already in and imagination could do, as the earlier service). While this is taking place, Seaclipper ship had done. Land is negotiating the sale of all the Like the Flying Clouds of the 1850s, the SL-7s. The prospective buyer is none other SL-7 has electrified the shipping world than the United States Navy. While the with its record-breaking speeds. How SL-7 American taxpayer would eventually have sailors like to brag about &quot;passing to foot the bill for operating the energyeverything in sight&quot; wherever they go! inefficient SL-7s, if indeed the Navy does And, with the ships&#39; designed service speed take them over, I would be glad to see them of 33 knots, their proud boast is easy to remain under American control (there had believe. On a typical voyage an SL-7 will been rumors that the SL-7s would be sold leave Port Elizabeth, New Jersey (with to foreign interests). Certainly, the SL-7s around 1,000 containers), call briefly on would be an important and much-needed Portsmouth, Virginia, then cross the addition to our Navy&#39;s fleet of fastAtlantic to call on three European ports deployment logistical supply ships. And, (Bremer haven, Rotterdam, and Algeciras, as such, the SL-7 might well have a much Spain), then re-cross the Atlantic to arrive longer useful life than did the clipper ship in Port Elizabeth just 21 days later! And of the last century. that&#39;s at speeds no faster then 29 knots! Unlike the earlier clippers, however, the And so, ironically, the technological SL-7 does not sacrifice payload for speed. breakthrough that spelled the death-toll In addition to being the fastest merchant for the clipper ship - the steam engine ship type in the world, the SL-7 is also one has now numbered the glory days of its of the largest at an overall length of 944 modern counterpart, the SL-7. And feet. The SL-7 achieves its speed from twin emerging as the wave of the future (if not screws backed up by steam engines deliverthe present) is the vastly more economical, ing a total of 120,000 hp. Her power, in if slower, diesel-powered ship. With some combination with a graceful hull, makes 70 percent of foreign-flag, ocean-going the SL-7 capable of speeds in excess of 33 ships now diesel-powered, the everknots. While the engines contributed to innovative Sea-Land seems well advised launching the SL-7 into the forefront of with its plans to keep up with the trend even if it means giving up &quot;the Clipper shipping in the 1970s, they now must take the blame for the SL-7 present predicaShip of the 1970s&#39;.&#39; w ment. Like the former &quot;Greyhounds of Mr. Gillen, who works for the Seafarers the Sea,&quot; the SL-7 has practically outlived International Union, is also editor of the its usefulness as a practical merchant ship National Society&#39;s Liberty Log. He recenttype, and in just under 10 years. ly went to sea in an SL-7. &quot;SL-7 sailors like lo brag about passing everything in sight.&quot;