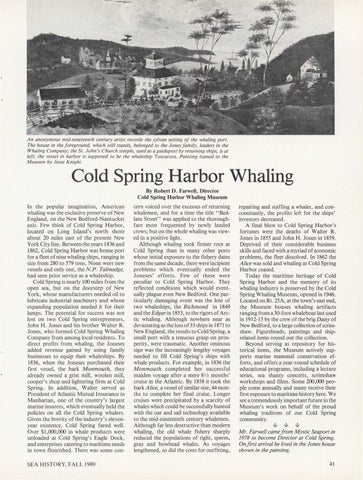 An anonymous mid-nineteenth century artist records the sylvan setting of the whaling port. The house in the foreground, which still stands, belonged to the Jones family, leaders in the Whaling Company; the St. John&#39;s Church steeple, used as a guidepost by returning ships, is at left; the vessel in harbor is supposed to be the whaleship Tuscarora. Painting loaned to the Museum by Jesse Knight.

Cold Spring Harbor Whaling By Robert D. Farwell, Director Cold Spring Harbor Whaling Museum In the popular imagination, American whaling was the exclusive preserve of New England, on the New Bedford-Nantucket axis. Few think of Cold Spring Harbor, located on Long Island&#39;s north shore about 20 miles east of the present New York City line. Between the years 1836 and 1862, Cold Spring Harbor was home port for a fleet of nine whaling ships, ranging in size from 280 to 579 tons. None were new vessels and only one, the N.P. Talmadge, had seen prior service as a whaleship. Cold Spring is nearly 100 miles from the open sea, but on the doorstep of New York, whose manufacturers needed oil to lubricate industrial machinery and whose expanding population needed it for their lamps. The potential for success was not lost on two Cold Spring entrepreneurs, John H. Jones and his brother Walter R. Jones, who formed Cold Spring Whaling Company from among local residents. To direct profits from whaling, the Joneses added revenue gained by using family businesses to equip their whaleships. By 1836, when the Joneses purchased their first vessel, the bark Monmouth, they already owned a grist mill, woolen mill, cooper&#39;s shop and lightering firm at Cold Spring. In addition, Walter served as President of Atlantic Mutual Insurance in Manhattan, one of the country&#39;s largest marine insurers, which eventually held the policies on all the Cold Spring whalers. Given the brevity of the industry&#39;s elevenyear existence, Cold Spring fared well. Over $1,000,000 in whale products were unloaded at Cold Spring&#39;s Eagle Dock, and enterprises catering to maritime needs in town flourished. There was some conSEA HISTORY, FALL 1980

cern voiced over the excesses of returning whalemen, and for a time the title &quot;Bedlam Street&#39;&#39; was applied to the thoroughfare most frequented by newly landed crews; but on the whole whaling was viewed in a positive light. Although whaling took firmer root at Cold Spring than in many other ports whose initial exposure to the fishery dates from the same decade, there were incipient problems which eventually ended the Joneses&#39; efforts. Few of these were peculiar to Cold Spring Harbor. They reflected conditions which would eventually plague even New Bedford. One particularly damaging event was the loss of two whaleships, the Richmond in 1849 and the Edgar in 1853, to the rigors of Arctic whaling. Although nowhere near as devastating as the loss of33 ships in 1871 to New England, the results to Cold Spring, a small port with a tenuous grasp on prosperity, were traumatic. Another ominous sign was the increasingly lengthy voyages needed to fill Cold Spring&#39;s ships with whale products. For example, in 1836 the Monmouth completed her successful maiden voyage after a mere 8 Yi months&#39; cruise in the Atlantic. By 1858 it took the bark Alice, a vessel of similar size, 44 months to complete her final cruise. Longer cruises were precipitated by a scarcity of whales which could be successfully hunted with the oar and sail technology available to the mid-nineteenth century whalemen. Although far less destructive than modern whaling, the old whale fishery sharply reduced the populations of right, sperm, gray and bowhead whales. As voyages lengthened, so did the costs for outfitting,

repairing and staffing a whaler, and concomitantly, the profits left for the ships&#39; investors decreased. A final blow to Cold Spring Harbor&#39;s fortunes were the deaths of Walter R. Jones in 1855 and John H. Jones in 1859. Deprived of their considerable business skills and faced with a myriad of economic problems, the fleet dissolved. In 1862 the Alice was sold and whaling at Cold Spring Harbor ceased. Today the maritime heritage of Cold Spring Harbor and the memory of its whaling industry is preserved by the Cold Spring Whaling Museum, opened in 1946. Located on Rt. 25A, at the town&#39;s east end, the Museum houses whaling artifacts ranging from a 30-foot whaleboat last used in 1912-13 bythecrewofthebrigDaisyof New Bedford, to a large collection of scrimshaw. Figureheads, paintings and shiprelated items round out the collection. Beyond serving as repository for historical items, the Museum actively supports marine mammal conservation efforts, and offers a year-round schedule of educational programs, including a lecture series, sea shanty concerts, scrimshaw workshops and films. Some 200,000 people come annually and many receive their first exposure to maritime history here. We see a tremendously important future in the Museum&#39;s work on behalf of the proud whaling traditons of our Cold Spring community.

Mr. Farwell came from Mystic Seaport in 1978 to become Director at Cold Spring. On first arrival he lived in the Jones house shown in the painting. 41