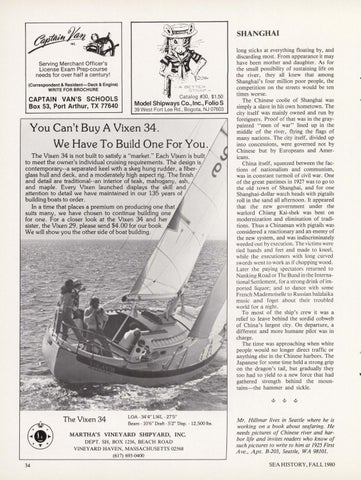 The Vixen 34 is not built to satisfy a &quot;market.&quot; Each Vixen is built to meet the owner&#39;s individual cruising requirements. The design is/ . ( ) contemporary--a separated keel with a skeg hung rudder, a fiber-/ glass hull and deck , and a moderately high aspect rig. The finish and detail are traditional--an interior of teak, mahogany , ash , and maple . Every Vixen launched displays the skill and attention to detail we have maintained in our 135 years of building boats to order. In a time that places a premium on producing one that suits many, we have chosen to continue building one for one . For a closer look at the Vixen 34 and her sister, the Vixen 29, please send $4.00 for our book. We will show you the other side of boat building .

long sticks at everything floating by, and discarding most. From appearance it may have been mother and daughter. As for the small possibility of sustaining life on the river, they all knew that among Shanghai&#39;s four million poor people, the competition on the streets would be ten times worse. The Chinese coolie of Shanghai was simply a slave in his own hometown. The city itself was mainly owned and run by foreigners. Proof of that was in the graypainted &quot;men of war&quot; lined up in the middle of the river, flying the flags of many nations. The city itself, divided up into concessions, were governed not by Chinese but by Europeans and Americans. China itself, squeezed between the factions of nationalism and communism, was in constant turmoil of civil war. One of the great pastimes in 1927 was to go to the old town of Shanghai, and for one Shanghai-dollar watch heads with pigtails roll in the sand all afternoon. It appeared that the new government under the warlord Chiang Kai-shek was bent on modernization and elimination of traditions. Thus a Chinaman with pigtails was considered a reactionary and an enemy of the new system, and was indiscriminately weeded out by execution. The victims were tied hands and feet and made to kneel, while the executioners with long curved swords went to work as if chopping wood. Later the paying spectators returned to Nan king Road or The Bund in the International Settlement, for a strong drink of imported liquor; and to dance with some French Mademoiselle to Russian balalaika music and foget about their troubled world for a night. To most of the ship&#39;s crew it was a relief to leave behind the sordid cobweb of China&#39;s largest city. On departure, a different and more humane pilot was in charge. The time was approaching when white people would no longer direct traffic or anything else in the Chinese harbors. The Japanese for some time held a strong grip on the dragon&#39;s tail, but gradually they too had to yield to a new force that had gathered strength behind the mountains-the hammer and sickle.

Mr. Hillmar lives in Seattle where he is working on a book about seafaring. He needs pictures of Chinese river and harbor life and invites readers who know of such pictures to write to him at 1925 First Ave., Apt. B-203, Seattle, WA 98101. SEA HISTORY, FALL 1980