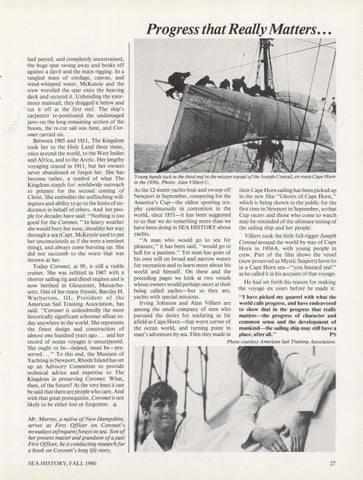 Progress that Really Matters ... had parted, and completely unrestrained, the huge spar swung away and broke off against a davit and the main rigging. In a tangled mass of cordage, canvas, and wind-whipped water, McKenzie and the crew wrestled the spar onto the heaving d_eck and secured it. Unbending the enormous mainsail, they dragged it below and Âˇ &#39; cut it off at the first reef. The ship&#39;s carpenter re-positioned the undamaged jaws on the long remaining section of the boom, the re-cut sail was bent, and Coronet carried on. Between 1905 and 1911, The Kingdom took her to the Holy Land three times, once around the world, to the West Indies and Africa, and to the Arctic. Her lengthy voyaging ceased in 1911 , but her owners never abandoned or forgot her. She has become rather, a symbol of what The Kingdom stands for: worldwide outreach to prepare for the second coming of Christ. She embodies the unflinching willingness and ability to go to the limits of endurance in behalf of others. And her people for decades have said: &quot;Nothing is too good for the Coronet. &quot;In heavy weather she would bury her nose, shoulder her way through a sea (Capt. McKenzie used to pat her unconsciously as if she were a sentient thing), and always come bursting up. She did not succumb to the worst that was thrown at her. Today Coronet, at 95, is still a viable cruiser. She was refitted in 1947 with a shorter sailing rig and diesel engines and is now berthed in Gloucester, Massachusetts. One of her many friends, Barclay H. Warburton, III, President of the American Sail Training Association, has said: &quot;Coronet is undoubtedly the most historically significant schooner afloat today anywhere in the world. She represents the finest design and construction of almost one hundred years ago .. . and her record of ocean voyages is unsurpassed. She ought to be-indeed, must be-preserved . .. &quot; To this end, the Museum of Yachting in Newport, Rhode Island has set up an Advisory Committee to provide technical advice and expertise to The Kingdom in preserving Coronet. What, then, of the future? At the very least it can be said that there are people who care. And with that great prerequisite, Coronet is not likely to be either lost or forgotten . w

Young hands tuck in the third reef in the mizzen topsail of the Joseph Conrad, en route Cape Horn in the 1930s. Photo: Alan Villiers ÂŠ .

As the 12-meter yachts beat and swoop off Newport in September, competing for the America&#39;s Cup-the oldest sporting trophy continuously in contention in the world, since 1851-it has been suggested to us that we do something more than we have been doing in SEA HISTORY about yachts. &quot;A man who would go to sea for pleasure,&quot; it has been said, &quot;would go to hell for a pastime.&quot; Yet man has gone of his own will on broad and narrow waters for recreation and to learn more about his world and himself. On these and the preceding pages we look at two vessels whose owners would perhaps snort at their being called yachts-but so they are, yachts with special missions. Irving Johnson and Alan Villiers are among the small company of men who pursued the desire for seafaring as far afield as Cape Horn-that worst corner of the ocean world, and turning point in man&#39;s adventure by sea. Film they made in

their Cape Horn sailing has been picked up in the new film &quot;Ghosts of Cape Horn,&quot; which is being shown to the public for the first time in Newport in September, so that Cup racers and those who come to watch may be reminded of the ultimate testing of the sailing ship and her people. Villiers took the little full-rigger Joseph Conrad around the world by way of Cape Horn in 1934-6, with young people in crew. Part of the film shows the vessel (now preserved as Mystic Seaport) hove-to in a Cape Horn sea-&quot;you bastard sea!&quot; as he called it in his account of that voyage. He had set forth his reason for making the voyage six years before he made it: &quot;I have picked my quarrel with what the world calls progress, and have endeavored to show that in the progress that really matters-the progress of character and common sense and the development of mankind-the sailing ship may still have a PS place, after all.&quot;