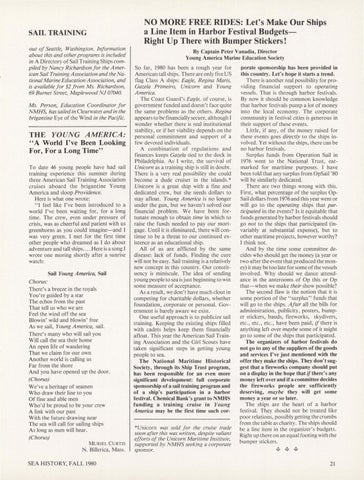 NO MORE FREE RIDES: Let's Make Our Ships a Line Item in Harbor Festival BudgetsRight Up There with Bumper Stickers!

SAIL TRAINING out of Seattle, Washington. Information about this and other programs is included in A Directory of Sail Training Ships compiled by Nancy Richardson for the American Sail Training Association and the National Marine Education Association, and is available for $2 from Ms. Richardson, 69 Burnet Street, Maplewood NJ 07040. Ms. Person, Education Coordinator for NMHS, has sailed in Clearwater and in the brigantine Eye of the Wind in the Pacific.

THE YOUNG AMERICA: "A World I've Been Looking For, For a Long Time" To date 46 young people have had sail training experience this summer during three American Sail Training Association cruises aboard the brigantine Young America and sloop Providence. Here is what one wrote: "I feel like I've been introduced to a world I've been waiting for, for a long time. The crew, even under pressure of crisis, was as cheerful and patient with us greenhorns as you could imagine-and I was very green. I met for the first time other people who dreamed as I do about adventure and tall ships . ... Here is a song I wrote one moring shortly after a sunrise watch: Sail Young America, Sail Chorus: There's a breeze in the royals You're guided by a star The echos from the past That tell us who we are Feel the wind off the sea Blowin' wild and blowin' free As we sail, Young America, sail. There's many who will sail you Will call the sea their home An open life of wandering That we claim for our own Another world is calling us Far from the shore And you have opened up the door. (Chorus) We've a heritage of seamen Who draw their line to you Of fine and able men Who'd be proud to be your crew A link with our past With the future drawing near The sea will call for sailing ships As long as men will hear. (Chorus) MURIEL CURTIS

By Captain Peter Vanadia, Director Young America Marine Education Society So far, 1980 has been a rough year for American tall ships. There are only five US flag Class A ships: Eagle, Regina Maris, Gaze/a Primeiro, Unicorn and Young America. The Coast Guard's Eagle, of course, is government funded and doesn't face quite the same problems as the others. Regina appears to be financially secure, although I wonder whether there is real institutional stability, or if her viability depends on the personal commitment and support of a few devoted individuals. A combination of regulations and finances keeps Gaze/a tied to the dock in Philadelphia. As I write, the survival of Unicorn as a training ship is still in doubt. There is a very real possibility she could become a dude cruiser in the islands.* Unicorn is a great ship with a fine and dedicated crew, but she needs dollars to stay afloat. Young America is no longer under the gun, but we haven't solved our financial problem. We have been fortunate enough to obtain time in which to raise the funds needed to pay our mortgage. Until it is eliminated, there will continue to be a threat to our continued existence as an educational ship . All of us are afflicted by the same disease: lack of funds. Finding the cure will not be easy. Sail training is a relatively new concept in this country. Our constituency is miniscule . The idea of sending young people to sea is just beginning to win some measure of acceptance. As a result, we don ' t have much clout in competing for charitable dollars, whether foundation, corporate or personal. Government is barely aware we exist. One useful approach is to publicize sail training. Keeping the existing ships filled with cadets helps keep them financially afloat. This year the American Sail Training Association and the Girl Scouts have taken significant steps in getting young people to sea. The National Maritime Historical Society, through its Ship Trust program, has been responsible for an even more significant development: full corporate sponsorship of a sail training program and of a ship's participation in a harbor festival. Chemical Bank's grant to NMHS funding a training cruise in Young America may be the first time such cor*Unicorn was sold for the cruise trade soon after this was wrillen, despite valiant efforts of the Unicorn Maritime Institute, supported by NMHS seeking a corporate sponsor.

porate sponsorship has been provided in this country. Let's hope it starts a trend. There is another real possibility for providing financial support to operating vessels. That is through harbor festivals. By now it should be common knowledge that harbor festivals pump a lot of money into the local economy. The corporate community in festival cities is generous in their support of these events. Little, if any, of the money raised for these events goes directly to the ships involved . Yet without the ships, there can be no harbor festivals. Surplus funds from Operation Sail in 1976 went to the National Trust, earmarked for maritime purposes. I have been told that any surplus from OpSail '80 will be similarly dedicated. There are two things wrong with this. First, what percentage of the surplus OpSail dollars from I 976and this year went or will go to the operating ships that participated in the events? ls it equitable that funds generated by harbor festivals should go not to the ships that participated (invariably at substantial expense), but to other maritime projects, however worthy? I think not. And by the time some committee decides who should get the money (a year or two after the event that produced the money) it may be too late for some of the vessels involved. Why should we dance attendance in the anterooms of Op this or Op that-when we make their show possible? The second flaw is the notion that it is some portion of the "surplus" funds that will go to the ships. After all the bills for administration, publicity, posters, bumper stickers, bands, fireworks, skydivers, etc., etc., etc., have been paid, if there is anything left over maybe some of it might go to some of the ships that participated. The organizers of harbor festivals do not go to any of the suppliers of the goods and services I've just mentioned with the offer they make the ships. They don't suggest that a fireworks company should put on a display in the hope that if there's any money left over and if a committee decides the fireworks people are sufficiently deserving, maybe they will get some money a year or so later. The ships are the heart of a harbor festival. They should not be treated like poor relations, possibly getting the crumbs from the table as charity. The ships should be a line item in the organizer's budgets. Right up there on an equal footing with the bumper stickers.