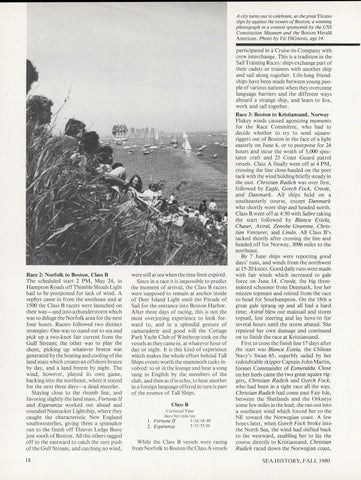 A city turns out to celebrate, as the great Elcano slips by against the towers of Boston; a winning photograph in a contest sponsored by the USS Constitution Museum and the Boston Herald American. Photo by Vic DiGravio, age 14.

participated in a Cruise-in-Company with crew interchange. This is a tradition in the Sail Training Races: ships exchange part of their cadets or trainees wit h another ship and sail along together. Life-long friendships have been made between young people of various nations when they overcome language barriers and the different ways aboard a strange ship, and learn to live, work and sail together. Race 3: Boston to Kristiansand, Norway Flukey winds caused agonizing moments for the Race Committee, who had to decide whether to try to send sq uareriggers out of Boston in the face of a light easterly on June 4, or to postpone for 24 hours and incur the wrath of 3,000 spectator craft and 25 Coast Guard patrol vessels. Class A fin ally went off at 4 PM, crossing the line close-hauled on the port tack with the wind holding briefly steady in the east. Christian Radich was over first, followed by Eagle, Gorch Fack, Creole, and Danmark. All ships held on a southeasterly course, except Danmark who shortly wore ship and headed north . Class B went off at 4:30 with Sabre taking the start followed by Blanca Estela,

Race 2: Norfolk to Boston, Class B The scheduled start 2 PM, May 24, in Hampton Roads off Thimble Shoals Light had to be postponed for lack of wind. A zephyr came in from the southeast and at 1500 the Class B racers were launched on their way-and into a thunderstorm which was to deluge the Norfolk area for the next fo ur hours. Racers followed two distinct strategies: One was to stand out to sea and pick up a two-knot fair current from the Gulf Stream; the other was to play the shore, picking up whatever breeze was generated by the heatingand cooling of the land mass which creates an offshore breeze by day, and a land breeze by night. The wind, however, played its own game, backing into the northeast, where it stayed for the next three days-a dead muzzler. Staying close to the rhumb line, and favoring slightly the land mass, Fortuna II and Esperanza worked out ahead and rounded Nantucket Lightship, where they caught the characteristic New England southwesterlies, giving them a spinnaker run to the finish off Thieves Ledge Buoy just south of Boston. All the others sagged off to the eastward to catch the sure push of the Gulf Stream, and catching no wind ,

were still at sea when the time limit expired . Since in a race it is impossible to predict the moment of arrival, the Class B racers were supposed to remain at anchor inside of Deer Island Light until the Parade of Sail for the entrance into Boston Harbor. After three days of racing, this is not the most overjoying experience to look forward to, and in a splendid gesture of camaraderie and good will the Cottage Park Yacht Club of W inth rop took on the vessels as they came in, at whatever hour of day or night. It is this kind of experience which makes the whole effort behind Tall Ships events worth the mammoth tasks involved: to sit in the lounge and hear a song sung in English by the members of the club, and then as if in echo, to hear another in a foreign language offered in turn is part of the essence of Tall Ships. Class B Corrected Time da ys/ hrs/min/sec l. Fortuna II 3/ 14/ 18/ 49

tacked shortly after crossing the line and headed off for Norway, 3096 miles to the northeast. By 7 June ships were reporting good days&#39; runs, and winds from the northwest at 15-20 knots. Good daily runs were made with fair winds which increased to gale force on June 14. Creole, the big threemasted schooner from Denmark, lost her mizzen topmast and retired from the race to head for Southampton. On the 18th a great gale sprang up and all had a hard time; Astral blew out mainsail and storm topsail, lost steering and lay hove-to for several hours until the storm abated. She repaired her own damage and continued on to finish the race at Kristiansand. First to cross the finish line 17 days after the start was Blanca Estela, the Chilean Navy&#39;s Swan 65, superbly sailed by her redoubtable skipper Captain John Martin, former Commander of Esmeralda. Close on her heels came the two great square riggers, Christian Radich and Gorch Fack, who had been in a tight race all the way. Christian Radich had come past Fair Isle, between the Shetlands and the Orkneys some few miles in the lead ; she ran out into a southeast wind which forced her to the NE toward the Norwegian coast. A few hours later, when Gorch Fack broke into the North Sea, the wind had shifted back to the westward, enabling her to lay the course directly to Kristiansand. Christian Radich raced down the Norwegian coast, SEA HI STORY, FALL 1980