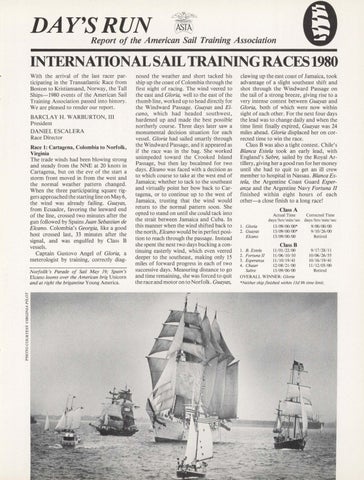 INTERNATIONAL SAIL TRAINING RACES 1980 With the arrival of the last racer participating in the Transatlantic Race from Boston to Kristiansand, Norway, the Tall Ships-1980 events of the American Sail Training Association passed into history. We are pleased to render our report. BARCLAY H. WARBURTON, III President DANIEL ESCALERA Race Director Race 1: Cartagena, Colombia to Norfolk, Virginia

The trade winds had been blowing strong and steady from the NNE at 20 knots in Cartagena, but on the eve of the start a storm front moved in from the west and the normal weather pattern changed . When the three participating square riggers approached the starting line on May 6, the wind was already failing. Guayas, from Ecuador, favoring the leeward end of the line, crossed two minutes after the gun followed by Spains Juan Sebastian de Elcano. Colombia&#39;s Georgia, like a good host crossed last, 33 minutes after the signal, and was engulfed by Class B vessels. Captain Gustovo Angel of Gloria, a meterologist by training, correctly diagNorjollk&#39;s Parade of Sail May 19; Spain&#39;s Elcano looms over the American brig Unicorn and at right the brigantine Young America.

nosed the weather and short tacked his ship up the coast of Colombia through the first night of racing. The wind veered to the east and Gloria, well to the east of the rhumb line, worked up to head directly for the Windward Passage. Guayas and Elcano, which had headed southwest, hardened up and made the best possible northerly course. Three days later saw a monumental decision situation for each vessel. Gloria had sailed smartly through the Windward Passage, and it appeared as if the race was in the bag. She worked unimpeded toward the Crooked Island Passage, but then lay becalmed for two days. Elcano was faced with a decision as to which course to take at the west end of Jamaica; whether to tack to the southeast and virtually point her bow back to Cartagena, or to continue up to the west of Jamaica, trusting that the wind would return to the normal pattern soon. She opted to stand on until she could tack into the strait between Jamaica and Cuba. In this manner when the wind shifted back to the north, Elcano would be in perfect position to reach through the passage. Instead she spent the next two days bucking a continuing easterly wind, which even veered deeper to the southeast, making only 15 miles of forward progress in each of two successive days. Measuring distance to go and time remaining, she was forced to quit the race and motor on to Norfolk. Guayas,

clawing up the east coast of Jamaica, took advantage of a slight southeast shift and shot through the Windward Passage on the tail of a strong breeze, giving rise to a very intense contest between Guayas and Gloria, both of which were now within sight of each other. For the next four days the lead was to change daily and when the time limit finally expired, Guayas was 24 miles ahead. Gloria displaced her on corrected time to win the race. Class B was also a tight contest. Chile&#39;s Blanca Estela took an early lead, with England&#39;s Sabre, sailed by the Royal Artillery, giving her a good run for her money until she had to quit to get an ill crew member to hospital in Nassau. Blanca Estela, the Argentine Coast Guard Esperanza and the Argentine Navy Fortuna II finished within eight hours of each other-a close finish to a long race! Class A I. Gloria 2. Guayas Elcano

Class B I. B. Estela