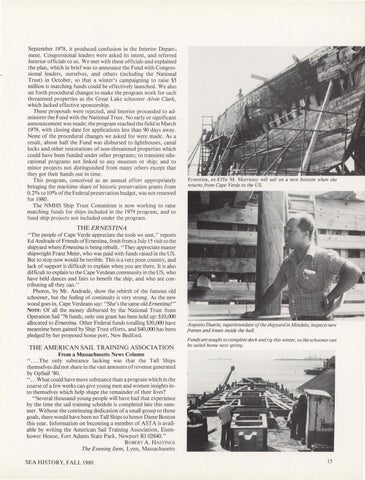 September 1978, it produced confusion in the Interior Depart.. ment. Congressional leaders were asked its intent, and referred Interior officials to us. We met with these officials and explained the plan, which in brief was to announce the Fund with Congressional leaders, ourselves, and others (including the National Trust) in October, so that a winter&#39;s campaigning to raise $5 million is matching funds could be effectively launched. We also set forth procedural changes to make the program work for such threatened properties as the Great Lake schooner Alvin Clark, which lacked effective sponsorship. These proposals were rejected, and Interior proceeded to administer the Fund with the National Trust. No early or significant announcement was made; the program reached the field in March 1979, with closing date for applications less than 90 days away. None of the procedural changes we asked for were made. As a result, about half the Fund was disbursed to lighthouses, canal locks and other restorations of non-threatened properties which could have been funded under other programs; to transient educational programs not linked to any museum or ship; and to minor projects not distinguished from many others except that they got their hands out in time. This program, conceived as an annual effort appropriately bringing the maritime share of historic preservation grants from 0.2% to 10% of the Federal preservation budget, was not renewed for 1980. The NMHS Ship Trust Committee is now working to raise matching funds for ships included in the 1979 program, and to fund ship projects not included under the program .

Ernestina, ex-Effie M. Morrissey will sail on a new bottom when she returns from Cape Verde to the US.

THE ERNESTINA &quot;The people of Cape Verde appreciate the tools we sent,&quot; reports Ed Andrade of Friends of Ernestina, fresh from a Jtily 15 visit to the shipyard where Ernestina is being rebuilt. &quot;They appreciate master shipwright Franz Meier, who was paid with funds raised in the US. But to stop now would be terrible. This is a very poor country, and lack of support is difficult to explain when you are there. It is also difficult to explain to the Cape Yerdean community in the US, who have held dances and fairs to benefit the ship, and who are contributing all they can.&quot; Photos, by Mr. Andrade, show the rebirth of the famous old schooner, but the feeling of continuity is very strong. As the new wood goes in, Cape Yerdeans say: &quot;She&#39;s the same old Ernestina!&quot; NOTE: Of all the money disbursed by the National Trust from Operation Sail &#39;76 funds, only one grant has been held up: $10,000 allocated to Ernestina. Other Federal funds totalling $30,000 have meantime been gained by Ship Trust efforts, and $40,000 has been pledged by her proposed home port, New Bedford.

Augusto Duarte, superintendant of the shipyard in Mindelo, inspects new frames and knees inside the hull. Funds are sought to complete deck and rig this winter, so the schooner can be sailed home next spring.

From a Massachusetts News Column &quot; .... The only substance lacking was that the Tall Ships themselves did not share in the vast amounts of revenue generated by OpSail &#39;80. &quot; ... What could have more substance than a program which in the course of a few weeks can give young men and women insights into themselves which help shape the remainder of their lives? &quot;Several thousand young people will have had that experience by the time the sail training schedule is completed late this summer. Without the continuing dedication of a small group to those goals, there would have been no Tall Ships to honor Dame Boston this year. Information on becoming a member of ASTA is available by writing the American Sail Training Association, Eisenhower House, Fort Adams State Park, Newport RI 02840.&quot; ROBERT A. HASTINGS The Evening Item, Lynn, Massachusetts