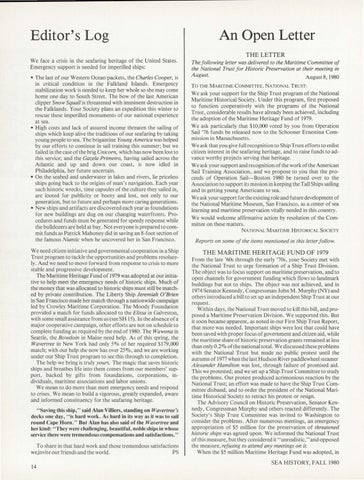 An Open Letter THE LETTER

We face a crisis in the seafaring heritage of the United States. Emergency support is needed for imperilled ships: • The last of our Western Ocean packets, the Charles Cooper, is in critical condition in the Falkland Islands. Emergency stabilization work is needed to keep her whole so she may come home one day to South Street. The bow of the last American clipper Snow Squall is threatened with imminent destruction in the Falklands. Your Society plans an expedition this winter to rescue these imperilled monuments of our national experience at sea. • High costs and lack of assured income threaten the sailing of ships which keep alive the traditions of our seafaring by taking young people to sea. The brigantine Young America was helped by our efforts to continue in sail training this summer; but we failed in the case of the brig Unicorn, which has now been lost to this service; and the Gaze/a Primeiro, having sailed across the Atlantic and up and down our coast, is now idled in Philadelphia, her future uncertain. • On the seabed and underwater in lakes and rivers, lie priceless ships going back to the origins of man&#39;s navigation. Each year such historic wrecks, time capsules of the culture they sailed in, are looted for publicity or booty and lost, not only to our generation, but to future and perhaps more caring generations. • New ships and artifacts are discovered each year as foundations for new buildings are dug on our changing waterfronts. Procedures and funds must be generated for speedy response while the bulldozers are held at bay. Not everyone is prepared to commit funds as Patrick Mahoney did in saving an 8-foot section of the famous Niantic when he uncovered her in San Francisco. We need citizen initiative and governmental cooperation in a Ship Trust program to tackle the opportunities and problems resolutely. And we need to move forward from response to crisis to more stable and progressive development. The Maritime Heritage Fund of 1979 was adopted at our initiative to help meet the emergency needs of historic ships. Much of the money that was allocated to historic ships must still be matched by private contribution. The Liberty Ship Jeremiah O&#39;Brien in San Francisco made her match through a nationwide campaign Jed by Crowley Maritime Corporation. The Moody Foundation provided a match for funds allocated to the Elissa in Galveston, with some small assistance from us (see SH 15). In the absenceofa major cooperative campaign, other efforts are not on schedule to complete funding as required by the end of 1980. The Wawona in Seattle, the Bowdoin in Maine need help. As of this spring, the Wavertree in New York had only 5% of her required $179,000 match; with our help she now has over 25%, and we are working under our Ship Trust program to see this through to completion. The help we bring is truly yours. The magic that saves historic ships and breathes life into them comes from our members&#39; support, backed by gifts from foundations, corporations, individuals, maritime associations and labor unions. We mean to do more than meet emergency needs and respond to crises. We mean to build a vigorous, greatly expanded, aware and informed constituency for the seafaring heritage. &#39;&#39;Saving this ship,&#39;&#39; said Alan Villiers, standing on Wavertree &#39;s decks one day, &quot;is hard work. As hard in its way as it was to sail round Cape Horn.&quot; But Alan has also said of the Wavertree and her kind: &quot;They were challenging, beautiful, noble ships in whose service there were tremendous compensations and satisfactions.&quot; To share in that hard work and those tremendous satisfactions we.invite our friends and the world . PS 14

The following letter was delivered to the Maritime Committee of the National Trust for Historic Preservation at their meeting in August. August8, 1980 TO THE MARITIME COMMITTEE, NATIONAL TRUST:

We ask your support for the Ship Trust program of the National Maritime Historical Society. Under this program, first proposed to function cooperatively with the programs of the National Trust, considerable results have already been achieved, including the adoption of the Maritime Heritage Fund of 1979. We ask particularly that $10,000 voted by you from Operation Sail &#39;76 funds be released now to the Schooner Ernestina Commission in Massachusetts. We ask that you give full recognition to Ship Trust efforts to enlist citizen interest in the seafaring heritage, and to raise funds to advance worthy projects serving that heritage. We ask your support and recognition of the work of the American Sail Training Association, and we propose to you that the proceeds of Operation Sail-Boston 1980 be turned over to the Association to support its mission in keeping the Tall Ships sailing and in getting young Americans to sea. We ask your support for the existing role and future development of the National Maritime Museum, San Francisco, as a center of sea learning and maritime preservation vitally needed in this country. We would welcome affirmative action by resolution of the Committee on these matters. NATIONAL MARITIME HISTORICAL SOCIETY

Reports on some of the items mentioned in this letter follow.

THE MARITIME HERITAGE FUND OF 1979 From the late &#39;60s through the early &#39;70s, your Society met with the National Trust to urge formation of a Ship Trust Division. The object was to focus support on maritime preservation, and to open channels for government funding which flows to landmark buildings but not to ships. The object was not achieved, and in 1974 Senator Kennedy, Congressman John M. Murphy (NY) and others introduced a bill to set up an independent Ship Trust at our request. Within days, the National Trust moved to kill this bill, and proposed a Maritime Preservation Division. We supported this. But it soon became apparent, as noted in our First Ship Trust Report, that more was needed . Important ships were lost that could have been saved with proper focus of government and citizen aid, while the maritime share of historic preservation grants remained at less than only 0.2 OJo of the national total. We discussed these problems with the National Trust but made no public protest until the autumn of 1977 when the last Hudson River paddlewheel steamer Alexander Hamilton was lost, through failure of promised aid. This we protested; and we set up a Ship.Trust Committee to study the problems. Our protest produced acrimonious reaction by the National Trust; an effort was made to have the Ship Trust Committee disband, and to order the president of the National Maritime Historical Society to retract his protest or resign. The Advisory Council on Historic Preservation, Senator Kennedy, Congressman Murphy and others reacted differently. The Society&#39;s Ship Trust Committee was invited to Washington to consider the problems. After numerous meetings, an emergency appropriation of $5 million for the preservation of threatened historic ships was agreed upon. We informed the National Trust of this measure, but they considered it &quot;unrealistic,&quot; and opposed the measure, refusing to attend any meetings on it. When the $5 million Maritime Heritage Fund was adopted, in SEA HISTORY, FALL 1980