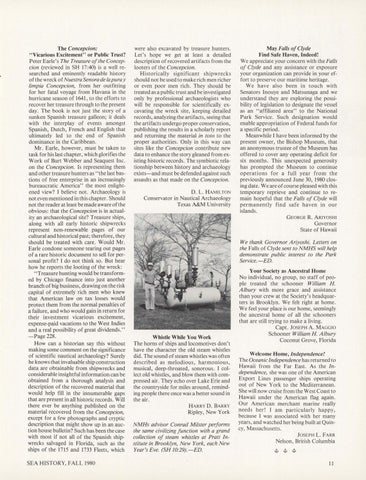 The Concepcion: &quot;Vicarious Excitement&quot; or Public Trust? Peter Earle&#39;s The Treasure of the Concepcion (reviewed in SH 17 :40) is a well researched and eminently readable history of the wreck of Nuestra Senora de la pura y limpia Concepcion, from her outfitting for her fatal voyage from Havana in the hurricane season of 1641 , to the efforts to recover her treasure through to the present day. The book is not just the story of a sunken Spanish treasure galleon; it deals with the interplay of events amongst Spanish, Dutch, French and English that ultimately led to the end of Spanish dominance in the Caribbean. Mr. Earle, however, must be taken to task for his last chapter, which glorifies the Work of Burt Webber and Seaquest Inc. on the Concepcion. ls representing them and other treasure hunters as&#39; &#39;the last bastions of free enterprise in an increasingly bureaucratic America&quot; the most enlightened view? I believe not. Archaeology is not even mentioned in this chapter. Should not the reader at least be made aware of the obvious: that the Concepcion is in actuality an archaeological site? Treasure ships, along with all early historic shipwrecks represent non-renewable pages of our cultural and historical past; therefore, they should be treated with care. Would Mr. Earle condone someone tearing out pages of a rare historic document to sell for personal profit? I do not think so. But hear how he reports the looting of the wreck: &#39;&#39;Treasure hunting would be transformed by Chicago finance into just another branch of big business, drawing on the risk capital of extremely rich men who knew that American law on tax losses would protect them from the normal penalties of a failure, and who would gain in return for their investment vicarious excitement, expense-paid vacations to the West Indies and a real possibility of great dividends.&quot; -Page 228. How can a historian say this without making some comment on the significance of scientific nautical archaeology? Surely he knows that invaluable ship construction data are obtainable from shipwrecks and considerable insightful information can be obtained from a thorough analysis and description of the recovered material that would help fill in the innumerable gaps that are present in all historic records. Will there ever be anything published on the material recovered from the Concepcion, except for a few photographs and cryptic description that might show up in an auction house bulletin? Such has been the case with most if not all of the Spanish shipwrecks salvaged in Florida, such as the ships of the 1715 and 1733 Fleets, which SEA HISTORY, FALL 1980

were also excavated by treasure hunters. Let&#39;s hope we get at least a detailed description of recovered artifacts from the looters of the Concepcion. Historicall y significant shipwrecks should not be used to make rich men richer or even poor men rich . They should be treated as a public trust and be investigated only by professional archaeologists who will be responsible for scientifically excavating the wreck site, keeping detailed records, analyzing the artifacts, seeing that the artifacts undergo proper conservation, publishing the results in a scholarly report and returning the material in toto to the proper authorities. Only in this way can sites like the Concepcion contribute new data to enhance the story gleaned from existing historic records. The symbiotic relationship between history and archaeology exists-and must be defended against such assaults as that made on the Concepcion. D. L. HAMILTON Conservator in Nautical Archaeology Texas A&amp;M University

May Falls of Clyde Find Safe Haven, Indeed! We appreciate your concern with the Falls of Clyde and any assistance or exposure your organization can provide in your effort to preserve our maritime heritage. We have also been in touch with Senators Inouye and Matsunaga and we understand they are exploring the possibility of legislation to designate the vessel as an &quot;affiliated area&quot; to the National Park Service. Such designation would enable appropriation of Federal funds for a specific period. Meanwhile I have been informed by the present owner, the Bishop Museum, that an anonymous trustee of the Museum has offered to cover any operating deficit for six months. This unexpected generosity has prompted the Museum to continue operations for a full year from the previously announced June 30, 1980 closing date. We are of course pleased with this temporary reprieve and continue to remain hopeful that the Falls of Clyde will permanently find safe haven in our islands. GEORGE R. ARIYOSHI Governor State of Hawaii

We thank Governor Ariyoshi. Letters on the Falls of Clyde sent to NMHS will help demonstrate public interest to the Park Service. -ED.

Whistle While You Work The horns of ships and locomotives don&#39;t have the character the old steam whistles did. The sound of steam whistles was often described as melodious, harmonious, musical, deep-throated, sonorous. I collect old whistles, and blow them with compressed air. They echo over Lake Erie and the countryside for miles around, reminding people there once was a better sound in the air. HARRY D. BARRY Ripley, New York

Your Society as Ancestral Home No individual, no group, no staff of people treated the schooner William H. A /bury with more grace and assistance than your crew at the Society&#39;s headquarters in Brooklyn. We felt right at home. We feel your place is our home, seemingly the ancestral home of all the schooners that are still trying to make a living. Capt. JOSEPH A. MAGGIO Schooner William H. Albury Coconut Grove, Florida Welcome Home, Independence! The Oceanic Independence has returned to Hawaii from the Far East. As the Independence, she was one of the American Export Lines passenger ships operating out of New York to the Mediterranean. She will now cruise from the West Coast to Hawaii under the American flag again. Our American merchant marine really needs her! I am particularly happy, because I was associated with her many years, and watched her being built at Quincy, Massachusetts. JOSEPH L. FARR Nelson, British Columbia