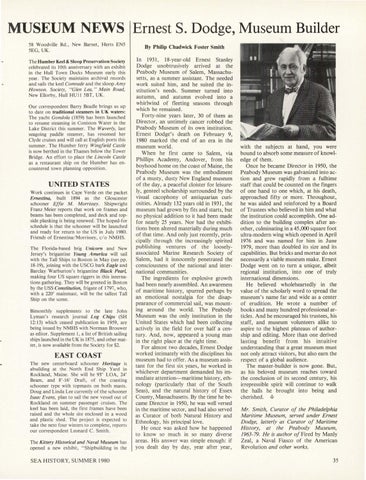 The Humber Keel &amp; Sloop Preservation Society celebrated its 10th anniversary with an exhibit in the Hull Town Docks Museum early this year. The Society maintains archival records and sails the keel Comrade and the sloop A my

In 1931, 18-year-old Ernest Stanley Dodge unobtrusively arrived at the Peabody Museum of Salem, Massachusetts, as a summer assistant. The needed work suited him, and he suited the institution&#39;s needs. Summer turned into autumn, and autumn evolved into a whirlwind of fleeting seasons through which he remained. Forty-nine years later, 30 of them as Director, an untimely cancer robbed the Peabody Museum of its own institution. Ernest Dodge&#39;s death on February 9, 1980 marked the end of an era in the museum world. When he first came to Salem, via Phillips Academy, Andover, from his boyhood home on the coast of Maine, the Peabody Museum was the embodiment of a musty, dusty New England museum of the day, a peaceful cloister for leisurely, genteel scholarship surrounded by the visual cacophony of antiquarian curiosities. Already 132 years old in 1931, the museum had grown by fits and starts, but no physical addition to it had been made for nearly 25 years. Nor had the exhibitions been altered materially during much of that time. And only just recently, principally through the increasingly spirited publishing ventures of the looselyassociated Marine Research Society of Salem, had it innocently penetrated the consciousness of the national and international communities. The ingredients for explosive growth had been nearly assembled. An awareness of maritime history, spurred perhaps by an emotional nostalgia for the disappearance of commercial sail, was mounting around the world. The Peabody Museum was the only institution in the United States which had been collecting actively in the field for over half a century. And, now, appeared a young man in the right place at the right time. For almost two decades, Ernest Dodge worked intimately with the disciplines his museum had to offer. As a museum assistant for the first six years, he worked in whichever department demanded his immediate attention-maritime history, ethnology (particularly that of the South Seas), and the natural history of Essex County, Massachusetts. By the time he became Director in 1950, he was well versed in the maritime sector, and had also served as Curator of both Natural History and Ethnology, his principal love. He once was asked how he happened to know so much in so many diverse areas. His answer was simple enough: if you dealt day by day, year after year,

Howson. Society, &quot;Glen Lea,&quot; Main Road, New Ellorby, Hull HUI I SBT, UK. Our correspondent Barry Beadle brings us up to date on traditional steamers in UK waters: The yacht Gondola (1859) has been launched to resume steaming in Coniston Water in the Lake District this summer. The Waverly, last seagoing paddle steamer, has resumed her Clyde cruises and will call at English ports this summer. The Humber ferry Wingfield Castle is now berthed in the Thames below the Tower Bridge. An effort to place the Lincoln Castle as a restaurant ship on the Humber has encountered town planning opposition.

UNITED STATES Work continues in Cape Verde on the packet Ernestina, built 1894 as the Gloucester schooner Effie M. Morrissey. Shipwright Franz Meier reports that work on frames and beams has been completed, and deck and topside planking is being renewed. The hoped-for schedule is that the schooner will be launched and ready for return to the US in July 1980. Friends of Ernestina/ Morrissey, c/ o NMHS. The Florida-based brig Unicorn and New Jersey&#39;s brigantine Young America will sail with the Tall Ships to Boston in May (see pp. 18-19), joining with the USCG bark Eagle and Barclay Warburton&#39;s brigantine Black Pearl, making four US square riggers in this internations gathering. They will be greeted in Boston by the USS Constitution, frigate of 1797, who, with a 220&#39; mainmast, will be the tallest Tall Ship on the scene. Bimonthly supplements to the late John Lyman&#39;s research journal Log Chips (SH 12: 13) which ceased publication in 1959, are being issued by NMHS with Norman Brouwer as editor. Supplement I, a list of British sailing ships launched in the UK in 1875, and other matter, is now available from the Society for $2.

EAST COAST The new centerboard schooner Heritage is abuilding at the North End Ship Yard in Rockland, Maine. She will be 93&#39; LOA, 24&#39; Beam, and 8&#39;-16&#39; Draft, of the coasting schooner type with topmasts on both masts. Doug and Linda Lee currently of the schooner Isaac Evans, plan to sail the new vessel out of Rockland on summer passenger cruises. The keel has been laid, the first frames have been raised and the whole site enclosed in a wood and plastic shed. The project is expected to take the next four winters to complete, reports our correspondent Leonard C. Smith . The Kittery Historical and Naval Museum has opened a new exhibit, &quot;Shipbuilding in the

with the subjects at hand, you were bound to absorb some measure of knowledge of them. Once he became Director in 1950, the Peabody Museum was galvanized into action and grew rapidly from a fulltime staff that could be counted on the fingers of one hand to one which, at his death, approached fifty or more. Throughout, he was aided and reinforced by a Board of Trustees who believed in him and what the institution could accomplish. One addition to the building complex after another, culminating in a 45,000 square foot ultra-modern wing which opened in April 1976 and was named for him in June 1979, more than doubled its size and its capabilities. But bricks and mortar do not necessarily a viable museum make. Ernest Dodge went on to turn a unique, albeit regional institution, into one of truly international dimensions. He believed wholeheartedly in the value of the scholarly word to spread the museum&#39;s name far and wide as a center of erudition. He wrote a number of books and many hundred professional articles. And he encouraged his trustees, his staff, and museum volunteers alike to aspire to the highest plateaus of authorship and editing. More than one derived lasting benefit from his intmt1ve understanding that a great museum must not only attract visitors, but also earn the respect of a global audience. The master-builder is now gone. But, as his beloved museum reaches toward the conclusion of its second century, his irrepressible spirit will continue to walk the halls he brought into being and cherished. w

Mr. Smith, Curator of the Philadelphia Maritime Museum, served under Ernest Dodge, latterly as Curator of Maritime History, at the Peabody Museum, 1963-79. He is author of Fired by Manly Zeal, a Naval Fiasco of the American Revolution and other works. 35