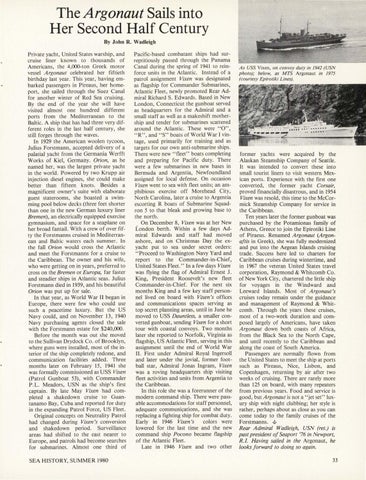 The Argonaut Sails into Her Second Half Century By John R. Wadleigh Private yacht, United States warship, and cruise liner known to thousands of Americans, the 4,000-ton Greek motor vessel Argonaut celebrated her fiftieth birthday last year. This year, having embarked passengers in Pireaus, her homeport, she sailed through the Suez Canal for another winter of Red Sea cruising. By the end of the year she will have visited almost one hundred different ports from the Mediterranean to the Baltic. A ship that has had three very different roles in the last half century, she still forges through the waves . In 1929 the American woolen tycoon, Julius Forstmann, accepted delivery of a palatial yacht from the Germania Werfft Works of Kiel, Germany. Orion, as he named her, was the largest private yacht in the world. Powered by two Krupp air injection diesel engines, she could make better than fifteen knots. Besides a magnificent owner&#39;s suite with elaborate guest staterooms, she boasted a swimming pool below decks (three feet shorter than one in the new German luxury liner Bremen), an electrically equipped exercise gymnasium, and space for a seaplane on her broad fantail. With a crew of over fifty the Forstmanns cruised in Mediterranean and Baltic waters each summer. In the fall Orion would cross the Atlantic and meet the Forstmanns for a cruise to the Caribbean. The owner and his wife, who were getting on in years, preferred to cross on the Bremen or Europa, far faster and steadier ships in Atlantic seas. Julius Forstmann died in 1939, and his beautiful Orion was put up for sale. In that year, as World War II began in Europe, there were few who could use such a peacetime luxury. But the US Navy could, and on November 13, 1940 Navy purchasing agents closed the sale with the Forstmann estate for $240,000. Before the month was out she moved to the Sullivan Drydock Co. of Brooklyn, where guns were installed, most of the interior of the ship completely redone, and communication facilities added. Three months later on February 15, 1941 she was formally commissioned as USS Vixen (Patrol Gunboat 53), with Commander P.L. Meadors, USN as the ship&#39;s first captain. By late May Vixen had completed a shakedown cruise to Guantanamo Bay, Cuba and reported for duty in the expanding Patrol Force, US Fleet. Original concepts on Neutrality Patrol had changed during Vixen&#39;s conversion and shakedown period. Surveillance areas had shifted to the east nearer to Europe, and patrols had become searches for submarines. Almost one third of SEA HISTORY, SUMMER 1980

Pacific-based combatant ships had surreptitiously passed through the Panama Canal during the spring of 1941 to reinforce units in the Atlantic. Instead of a patrol assignment Vixen was designated as flagship for Commander Submarines, Atlantic Fleet, newly promoted Rear Admiral Richard S. Edwards . Based in New London, Connecticut the gunboat served as headquarters for the Admiral and a small staff as well as a makeshift mothership and tender for submarines scattered around the Atlantic. These were &quot;0&quot;, &quot;R&quot;, and &quot;S&quot; boats of World War I vintage, used primarily for training and as targets for our own anti-submarine ships. There were new &quot;fleet&quot; boats completing and preparing for Pacific duty. There were a few submarines in new bases in Bermuda and Argentia, Newfoundland assigned for local defense. On occasion Vixen went to sea with fleet units; an amphibious exercise off Morehead City, North Carolina, later a cruise to Argentia escorting R boats of Submarine Squadron 5 to that bleak and growing base to the north. On December 8, Vixen was at her New London berth. Within a few days Admiral Edwards and staff had moved ashore, and on Christmas Day the exyacht put to sea under secret orders: &quot;Proceed to Washington Navy Yard and report to the Commander-in-Chief, United States Fleet.&#39;&#39; In a few days Vixen was flying the flag of Admiral Ernest J. King, President Roosevelt&#39;s new fleet Commander-in-Chief. For the next six months King and a few key staff personnel Jived on board with Vixen&#39;s offices and communications spaces serving as top secret planning areas, until in June he moved to USS Dauntless, a smaller converted gunboat, sending Vixen for a short tour with coastal convoys. Two months later she reported to Norfolk, Virginia as flagship, US Atlantic Fleet, serving in this assignment until the end of World War II. First under Admiral Royal Ingersoll and later under the jovial, former football star, Admiral Jonas Ingram, Vixen was a roving headquarters ship visiting fleet activities and units from Argentia to the Caribbean. In this role she was a forerunner of the modern command ship. There were passable accommodations for staff personnel, adequate communi&lt;;:ations, and she was replacing a fighting ship for combat duty. Early in 1946 Vixen&#39;s colors were lowered for the last time and the new command ship Pocono became flagship of the Atlantic Fleet. Late in 1946 Vixen and two other

former yachts were acquired by the Alaskan Steamship Company of Seattle. It was intended to convert these into small tourist liners to visit western Mexican ports . Experience with the first one converted, the former yacht Corsair, proved financially disastrous, and in 1954 Vixen was resold, this time to the McCormick Steamship Coinpany for service in the Caribbean. Ten years later the former gunboat was purchased by the Potamionas family of Athens, Greece to join the Epirotiki Line of Piraeus. Renamed Argonaut (Argonaftis in Greek), she was fully modernized and put into the Aegean Islands cruising trade. Success here Jed to charters for Caribbean cruises during wintertime, and in 1967 the veteran United States travel corporation, Raymond &amp; Whitcomb Co. of New York Oty, chartered the little ship for voyages in the Windward and Leeward Islands. Most of Argonaut&#39;s cruises today remain under the guidance and management of Raymond &amp; Whitcomb. Through the years these cruises, most of a two-week duration and composed largely of Americans, have taken Argonaut down both coasts of Africa, from the Black Sea to the North Cape, and until recently to the Caribbean and along the coast of South America. Passengers are normally flown from the United States to meet the ship at ports such as Pireaus, Nice, Lisbon, and Copenhagen, returning by air after two weeks of cruising. There are rarely more than 125 on board, with many repeaters from previous years. Food and service is good, but Argonaut is not a &quot;jet set&quot; luxury ship with night clubbing; her style is rather, perhaps about as close as you can come today to the family cruises of the Forstmanns. .t Rear Admiral Wadleigh, USN (ret.) is past president of Seaport &#39;76 in Newport, R.J. Having sailed in the Argonaut, he looks forward to doing so again. 33