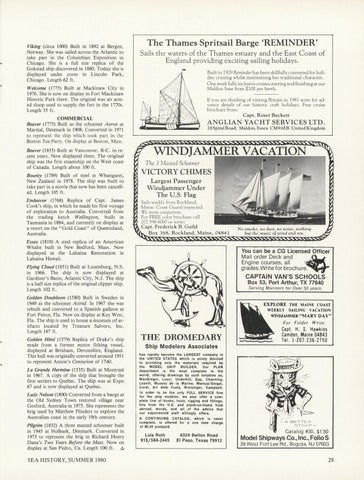 Viking (circa 1000) Built in 1892 at Bergen, Norway. She was sailed across the Atlantic to take part in the Columbian Exposition in Chicago. She is a full size replica of the Gokstad ship discovered in 1880. Today she is displayed under cover in Lincoln Park, Chicago . Length 62 ft.

The Thames Spritsail Barge &#39;REMINDER&#39; Sails the waters of the Thames estuary and the East Coast of England providing exciting sailing holidays. Built in 1929 Reminder h as been skillfully converted for holiday cruising whilst maintaining her traditional character. One week fully inclu sive cruises starting and finishing at our Maldon base from £100 per berth.

Welcome (1775) Built at Mackinaw City in 1976. She is now on display in Fort Mackinaw Historic Park there. The original was an armed sloop used to supply the fort in the 1770s. Length 55 ft.

If you are thinking of visiting Brit ain in 198 1 write for advance details of our historic craft holidays . Free cruise brochure from:

COMMERCIAL Beaver (1775) Built as the schooner Aeroe at Marstal, Denmark in 1908. Converted in 1971 to represent the ship which look part in the Boston Tea Party. On display at Boston, Mass.

Beaver (1835) Built at Vancouver, B.C. in recent years . Now displayed there. The original ship was the first steamship on the West coast of Canada. Length about 100 ft. Bounty (1789) Built of steel at Whangarei, New Zealand in 1978 . The ship was built to take part in a movie that now has been cancelled. Length I05 ft. Endeavor (1768) Replica of Capt. James Cook&#39;s ship, in which he made his first voyage of exploration to Australia. Converted from the trading ketch Wellington, built in Tasmania in 1884, and currently on display at a resort on the &quot;Gold Coast&quot; of Queensland, Australia.

Essex (1819) A steel replica of an American Whaler built in New Bedford, Mass. Now displayed at the Lahaina Restoration in Lahaina Hawaii.

You can be a CG Licensed Officer Mail order Deck and ~ -· . Engine courses, all · . _ grades. Write for brochure.

Flying Cloud (1851) Built at Lunenburg, N.S. in 1966. The ship is now displayed at Gardiner&#39;s Basin, Atlantic City, N.J. The ship is a half size replica of the original clipper ship. Length 102 ft. Golden Doubloon (1580) Built in Sweden in 1949 as the schooner Astrid. In 1967 she was rebuilt and converted to a Spanish galleon at Fort Peirce, Fla. Now on display at Key West, Fla. The ship is used to house a museum of artifacts located by Treasure Salvors, Inc. Length 167 ft. Golden Hind (1579) Replica of Drake&#39; s ship made from a former motor fishing vessel, displayed at Brixham, Devonshire, England. This hull was originally converted around I 951 to represent Anson&#39;s Centurion of 1740. La Grande Hermine (1535) Built at Montreal in 1967. A copy of the ship that brought the first settlers to Quebec. The ship was at Expo 67 and is now displayed at Quebec. Lady Nelson (1800) Converted from a barge at the Old Sydney Town restored village near Gosford, Australia in 1975. She represents the brig used by Matthew Flinders to explore the Australian coast in the early 19th century. Pilgrim (1832) A three masted schooner built in 1945 at Holbaek, Denmark. Converted in 1973 to represent the brig in Richard Henry Dana&#39;s Two Years Before the Mast. Now on display at San Pedro, Ca. Length 100 ft. w

Ship Modelers Associates has rapidly become the LARGEST company in the UNITED STATES which is solely devoted to providing only the materials required by the MODEL SHIP BUILDER. Our PLAN department is the most complete in the world, offering drawings by such notables as, MacGregor, Lusci, Underhill, Gay, Channing, Leavitt, Musees de la Marine, Mantua/Sergal, Corel, Art Amb Fusta, &#39;Breisinger, Campbell. In order to be lhe only FULL SERVICE firm for the ship modeler, we also offer a complete line of books, tools, rigging and fittings, kits from the U.S. and plank-on-frame from abroad, woods, and all of the advice that our experienced staff willingly offers. A CONTINUING CATALOG, which is never complete, is offered for a one time charge of $6.00 postpaid.