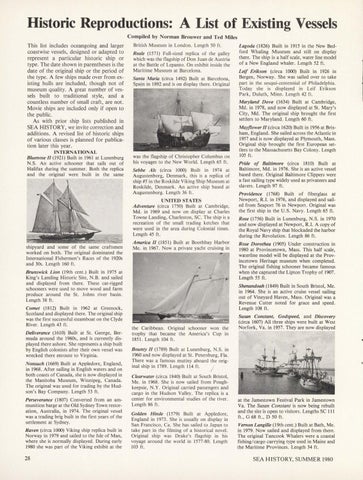 This list includes oceangoing and larger coastwise vessels, designed or adapted to represent a particular historic ship or type. The date shown in parentheses is the date of the original ship or the period of the type. A few ships made over from existing hulls are included , though not of museum quality. A great number of vessels built to traditional style, and a countless number of small craft, are not. Movie ships are included only if open to the public. As with prior ship lists published in SEA HISTORY, we invite correction and additions . A revised list of historic ships of various classes is planned for publication later this year. INTERNATIONAL Bluenose II (1921) Built in 1961 at Lunenburg N.S. An active schooner that sails out of Halifax during the summer. Both the replica and the original were built in the same

Reale (15 71) Full-sized replica of the galley which was the fl agship o f Don Juan de Austria at the Battle of Lepanto. On exhibit inside the Maritime Museum at Barcelona. Santa Maria (circa 1492) Built at Barcelona, Spain in 1892 and is on display there. Original

was the flagship of Christopher Columbus on his voyages to the New World . Length 65 ft.

Sebbe Ats (circa 1000) Built in 1974 at Augustenborg, Denmark , this is a replica of ship #5 in the Roskilde Viking Ship Museum at Roskilde, Denmark. An active ship based at Augustenborg. Length 36 ft. UNITED STATES Adventure (circa 1750) Built at Cambridge, Md. in 1969 and now on display at Charles Towne Landing, Charleston , SC. The ship is a recreation of the small trading ketches that were used in the area during Colonial times. Length 45 ft.

shipyard and some of the same craftsmen worked on both. The original dominated the International Fishermen&#39;s Races of the 1920s and 30s. Length 160 ft.

Brunswick Lion (19th cent.) Built in 1975 at King&#39;s Landing Historic Site, N.B. and sailed and displayed from there. These cat-rigged schooners were used to move wood and farm produce around the St. Johns river basin. Length 38 ft. Comet (1812) Built in 1962 at Greenock, Scotland and displayed there. The original ship was the first successful steamboat on the Clyde River. Length 43 ft. Deliverance (1610) Built at St. George, Bermuda around the 1960s, and is currently displayed there ashore. She represents a ship built by English colonists after their own vessel was wrecked there enroute to Virginia. Nonsuch (1669) Built at Appledore, England, in 1968. After sailing in English waters and on both coasts of Canada, she is now displayed in the Manitoba Museum , Winnipeg, Canada. The original was used for trading by the Hudson&#39;s Bay Company. Length 53 ft. Perseverance (1807) Converted from an ammunition barge at the Old Sydney Town restoration, Australia, in 1974. The original vessel was a trading brig built in the first years of the settlement at Sydney. Raven (circa 1000) Viking ship replica built in Norway in 1979 and sailed to the Isle of Man, where she is normally displayed . During early 1980 she was part of the Viking exhibit at the

Lagoda (1826) Built in 1915 in the New Bedford Whaling Museum and still on display there. The ship is a half scale, water line model of a New England whaler. Length 52 ft. Leif Erikson (circa 1000) Built in 1926 in Bergen, Norway. She was sailed over to take part in the sesqui-centennial of Philadelphia. Today she is displayed in Leif Erikson Park, Duluth, Minn. Length 42 ft. Maryland Dove (1634) Built at Cambridge, Md. in 1978, and now displayed at St. Mary&#39;s City, Md. The original ship brought the first settlers to Maryland. Length 60 ft. Mayflower II (circa 1620) Built in 1956 at Brixham, England . She sailed across the Atlantic in 1957 and is now displayed at Plymouth, Mass. Original ship brought the first European settlers to the Massachusetts Bay Colony. Length 105 ft. Pride of Baltimore (circa 1810) Built at Baltimore, Md . in 1976. She is an active vessel based there. Original Baltimore Clippers were a fast sailing type widely used as privateers and slavers. Length 97 ft. Providence (1768) Built of fiberglass at Newport, R.I. in 1976, and displayed and sailed from Seaport 76 in Newport. Original was the first ship in the U.S. Navy. Length 65 ft. Rose (1756) Built in Lunenburg, N.S. in 1970 and now displayed at Newport, R.l. A copy of the Royal Navy ship that blockaded the harbor during the Revolution. Length 86 ft. Rose Dorothea (1905) Under construction in 1980 at Provincetown, Mass. This half scale, waterline model will be displayed at the Provincetown Heritage museum when completed. The original fishing schooner became famous when she captured the Lipton Trophy of 1907. Length 55 ft. Shenandoah (1849) Built in South Bristol, Me. in 1964. She is an active cruise vessel sailing out of Vineyard Haven, Mass. Original was a Revenue Cutter noted for grace and speed. Length 108 ft.

Susan Constant, Godspeed, and Discovery (circa 1607) All three ships were built at West Norfork, Va. in 1957. They are now displayed

Clearwater (circa 1840) Built at South Bristol, Me. in 1968. She is now sailed from Poughkeepsie, N.Y. Original carried passengers and cargo in the Hudson Valley. The replica is a center for environmental studies of the river. Length 86 ft. Golden Hinde (1579) Built at Appledore, England in 1973. She is usually on display in San Francisco, Ca . She has sailed to Japan to take part in the filming of a historical novel. Original ship was Drake&#39;s flagship in his voyage around the world in 1577-80. Length 103 ft.

at the Jamestown Festival Park in Jamestown Va. The Susan Constant is now being rebuilt and the site is open to visitors. Lengths SC 111 ft. , G 68 ft., D 50 ft.

Vernon Langille (19th cent.) Built at Bath, Me. in 1979. Now sailed and displayed from there. The original Tancook Whalers were a coastal fishing/ cargo carrying type used in Maine and the Maritime Provinces. Length 34 ft.