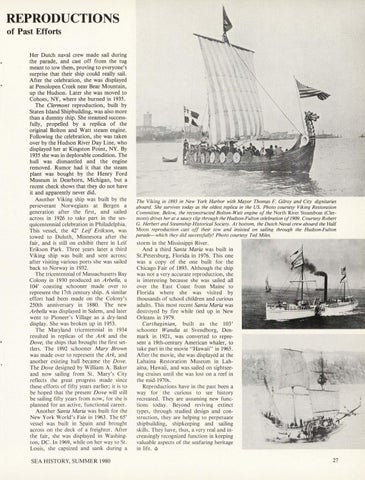 REPRODUCTIONS of Past Efforts Her Dutch naval crew made sail during the parade, and cast off from the tug meant to tow them, proving to everyone&#39;s surprise that their ship could really sail. After the celebration, she was displayed at Penolopen Creek near Bear Mountain, up the Hudson . Later she was moved to Cohoes, NY, where she burned in 1935 . The Clermont reproduction, built by Staten Island Shipbuilding, was also more than a dummy ship. She steamed successfully, propelled by a replica of the original Bolton and Watt steam engine. Following the celebration, she was taken over by the Hudson River Day Line, who displayed her at Kingston Point, NY. By 1935 she was in deplorable condition. The hull was dismantled and the engine removed. Rumor had it that the steam plant was bought by the Henry Ford Museum in Dearborn, Michigan, but a recent check shows that they do not have it and apparently never did. Another Viking ship was built by the perseverant Norwegians at Bergen a generation after the first, and sailed across in 1926 to take part in the sesquicentennial celebration in Philadelphia . This vessel, the 42&#39; Leif Erikson, was towed to Duluth , Minnesota after the fair, and is still on exhibit there in Leif Erikson Park. Three years later a third Viking ship was built and sent across; after visiting various ports she was sailed back to Norway in 1932. The tricentennial of Massachusetts Bay Colony in 1930 produced an Arbella, a 104&#39; coasting schooner made over to represent the 17th century ship. A similar effort had been made on the Colony&#39;s 250th anniversary in 1880. The new Arbella was displayed in Salem, and later went to Pioneer&#39;s Village as a dry-la nd display. She was broken up in 1953. The Maryland tricentennial in 1934 resulted in replicas of the Ark and the Dove, the ships that brought the first settlers. The 1892 schooner Mary Brown was made over to represent the Ark, and another existing hull became the Dove. The Dove designed by William A. Baker and now sailing from St. Mary&#39;s City reflects the great progress made since these efforts of fifty years earlier; it is to be hoped that the present Dove will still be sailing fifty years from now, for she is planned for an active, functional career. Another Santa Maria was built for the New York World &#39;s Fair in 1963 . The 65&#39; vessel was built in Spain and brought across on the deck of a frei ghter. After the fair, she was displayed in Washington, DC. In 1969, while on her way to St. Louis, she capsized and sank during a SEA HISTORY, SUMMER 1980

The Viking in 1893 in New York Harbor with Mayor Thomas F. Gilroy and City dignitaries aboard. She survives today as the oldest replica in the US. Photo courtesy Viking Restoration Committee. Below, the reconstructed Bolton-Watt engine of the North River Steamboat (Clermont) drives her at a saucy clip through the Hudson-Fulton celebration of 1909. Courtesy Robert G. Herbert and Steamship Historical Society. At bottom, the Dutch Naval crew aboard the Half Moon reproduction cast off their tow and insisted on sailing through the Hudson-Fulton parade-which they did successfully! Photo courtesy Ted Miles.

storm in the Mississippi River. And a third Santa Maria was built in St.Petersburg, Florida in 1976. This one was a copy of the one built for the Chicago Fair of 1893 . Although the ship was not a very accurate reproduction, she is interesting because she was sailed all over the East Coast from Maine to Florida where she was visited by thousands of school child ren and curious adults. This most recent Santa Maria was destroyed by fire while tied up in New Orleans in 1979. Carthaginian, built as the 103&#39; schooner Wandia at Svendborg, Denmark in 1921, was converted to represent a I 9th-century American whaler, to take part in the movie &quot;Hawaii&quot; in 1965. After the movie, she was displayed at the Lahaina Restoration Museum in Lahaina, Hawaii, and was sailed on sightseeing cruises until she was lost on a reef in the mid-1970s. Reproductions have in the past been a way for the curious to see history recreated . They are assuming new functions today . Beyond reviving extinct types, through studied design and construction, they are helping to perpetuate shipbuilding, shipkeeping and sail ing skills. They have, thus, a very real and increasingly recognized function in keeping valuable aspects of the seafaring heritage in life . w 27