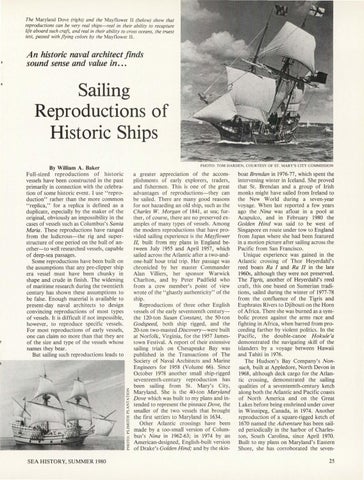 An historic naval architect finds sound sense and value in . ..

Sailing Reproductions of Historic Ships By William A. Baker Full-sized reproductions of historic vessels have been constructed in the past primarily in connection with the celebration of some historic event. I use &quot;reproduction&quot; rather than the more common &quot;replica,&quot; for a replica is defined as a duplicate, especially by the maker of the original, obviously an impossibility in the cases of vessels such as Columbus&#39;s Santa Maria. These reproductions have ranged from the ludicrous-the rig and superstructure of one period on the hull of another-to well researched vessels, capable of deep-sea passages. Some reproductions have been built on the assumptions that any pre-clipper ship era vessel must have been chunky in shape and crude in finish. The widening of maritime research during the twentieth century has shown these assumptions to be false. Enough material is available to present-day naval architects to design convincing reproductions of most types of vessels. It is difficult if not impossible, however, to reproduce specific vessels. For most reproductions of early vessels, one can claim no more than that they are of the size and type of the vessels whose names they bear. But sailing such reproductions leads to

a greater appreciation of the accomplishments of early explorers, traders, and fishermen. This is one of the great advantages of reproductions-they can be sailed. There are many good reasons for not hazarding an old ship, such as the Charles W. Morgan of 1841, at sea; further, of course, there are no preserved examples of many types of vessels. Among the modern reproductions that have provided sailing experience is the Mayflower II, built from my plans in England between July 1955 and April 1957, which sailed across the Atlantic after a two-andone-half hour trial trip. Her passage was chronicled by her master Commander Alan Villiers, her sponsor Warwick Charlton, and by Peter Padfield who from a crew member&#39;s point of view wrote of the &quot;ghastly authenticity&quot; of the ship . Reproductions of three other English vessels of the early seventeenth centurythe 120-ton Susan Constant, the 50-ton Godspeed, both ship rigged, and the 20-ton two-masted Discovery-were built at Norfolk, Virginia, for the 1957 Jamestown Festival. A report of their extensive sailing trials on Chesapeake Bay was published in the Transactions of The Society of Naval Architects and Marine Engineers for 1958 (Volume 66). Since October 1978 another small ship-rigged seventeenth-century reproduction has been sailing from St. Mary&#39;s City, 6~ Maryland. She is the 40-ton Maryland . ~ Dove which was built to my plans and m~ tended to represent the pinnace Dove, the ~ smaller of the two. vessels that brought ~ the first settlers to Maryland in 1634. ~ Other Atlantic crossings have been ~ made by a too-small version of Colum0 bus&#39;s Nina in 1962-63; in 1974 by an 5 American-designed, English-built version _._,,,_.....,...._&quot;&#39;--&quot; ii: of Drake&#39;s Golden Hind; and by the skin-

boat Brendan in 1976-77, which spent the intervening winter in Iceland. She proved that St. Brendan and a group of Irish monks might have sailed from Ireland to the New World during a seven-year voyage. When last reported a few years ago the Nina was afloat in a pool at Acapulco, and in February 1980 the Golden Hind was said to be west of Singapore en route under tow to England from Japan where she had been featured in a motion picture after sailing across the Pacific from San Francisco. Unique experience was gained in the Atlantic crossing of Thor Heyerdahl&#39;s reed boats Ra I and Ra II in the late 1960s, although they were not preserved. The Tigris, another of Heyerdahl&#39;s reed craft, this one based on Sumerian traditions, sailed during the winter of 1977-78 from the confluence of the Tigris and Euphrates Rivers to Djibouti on the Horn of Africa. There she was burned as a symbolic protest against the arms race and fighting in Africa, when barred from proceeding farther by violent politics. In the Pacific, the double-canoe Hokule&#39;a demonstrated the navigating skill of the islanders by a voyage between Hawaii and Tahiti in 1976. The Hudson&#39;s Bay Company&#39;s Nonsuch, built at Appledore, North Devon in 1968, although deck cargo for the Atlantic crossing, demonstrated the sailing qualities of a seventeenth-century ketch along both the Atlantic and Pacific coasts of North America and on the Great Lakes before being enshrined under cover in Winnipeg, Canada, in 1974. Another reproduction of a square-rigged ketch of 1670 named the Adventure has been sailed periodically in the harbor of Charleston, South Carolina, since April 1970. Built to my plans on Maryland&#39;s Eastern Shore, she has corroborated the seven25