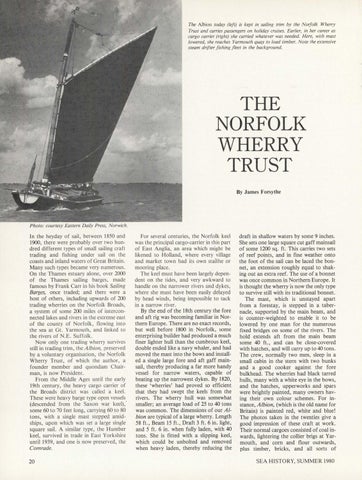 The Albion today (left) is kept in sailing trim by the Norfolk Wherry Trust and carries passengers on holiday cruises. Earlier, in her career as cargo carrier (right) she carried whatever was needed. Here, with mast lowered, she reaches Yarmouth quay to load timber. Note the extensive steam drifter fishing fleet in the background.

In the heyday of sail, between 1850 and 1900, there were probably over two hundred different types of small sailing craft trading and fishing under sail on the coasts and inland waters of Great Britain. Many such types became very numerous. On the Thames estuary alone, over 2000 of the Thames sailing barges, made famous by Frank Carr in his book Sailing Barges, once traded; and there were a host of others, including upwards of 200 trading wherries on the Norfolk Broads, a system of some 200 miles of interconnected lakes and rivers in the extreme east of the county of Norfolk, flowing into the sea at Gt. Yarmouth, and linked to the rivers of N.E. Suffolk. Now only one trading wherry survives still in trading trim , the Albion, preserved by a voluntary organisation, the Norfolk Wherry Trust, of which the author, a founder member and quondam Chairman, is now President. From the Middle Ages until the early 19th century, the heavy cargo carrier of the Broads district was called a keel. These were heavy barge type open vessels (descended from the Saxon war keel),&quot; some 60 to 70 feet long, carrying 60 to 80 tons, with a single mast stepped amidships, upon which was set a large single square sail. A similar type, the Humber keel, survived in trade in East Yorkshire until 1939, and one is now preserved, the Comrade. 20

For several centuries, the Norfolk keel was the principal cargo-carrier in this part of East Anglia, an area which might be likened to Holland, where every village and market town had its own stalthe or mooring place. The keel must have been largely dependent on the tides, and very awkward to handle on the narrower rivers and dykes, where she must have been easily delayed by head winds, being impossible to tack in a narrow river. By the end of the 18th century the fore and aft rig was becoming familiar in Northern Europe. There are no exact records, but well before 1800 in Norfolk, some enterprising builder had produced a much finer lighter hull than the cumbrous keel, double ended like a navy whaler, and had moved the mast into the bows and installed a single large fore and aft gaff mainsail, thereby producing a far more handy vessel for narrow waters, capable of beating up the narrowest dykes. By 1820, these &#39;wherries&#39; had proved so efficient that they had swept the keels from the rivers. The wherry hull was somewhat smaller; an average load of 25 to 40 tons was common. The dimensions of our Albion are typical of a large wherry. Length 58 ft., Beam 15 ft., Draft 3 ft. 6 in. light, and 5 ft. 6 in. when fully laden, with 40 tons. She is fitted with a slipping keel, which could be unbolted and removed when heavy laden, thereby reducing the

draft in shallow waters by some 9 inches. She sets one large square cut gaff mainsail of some 1200 sq. ft. This carries two sets of reef points, and in fine weather onto the foot of the sail can be laced the bonnet, an extension roughly equal to shaking out an extra reef. The use of a bonnet was once common in Northern Europe. It is thought the wherry is now the only type to survive still with its traditional bonnet. The mast, which is unstayed apart from a forestay, is stepped in a tabernacle, supported by the main beam, and is counter-weighted to enable it to be lowered by one man for the numerous fixed bridges on some of the rivers. The hold extends aft from the main beam some 40 ft., and can be close-covered with hatches, and will carry up to 40 tons. The crew, normally two men, sleep in a small cabin in the stern with two bunks and a good cooker against the fore bulkhead. The wherries had black tarred hulls, many with a white eye in the bows, and the hatches, upperworks and spars were brightly painted, many owners having their own colour schemes. For instance, Albion, (which is the old name for Britain) is painted red, white and blue! The photos taken in the twenties give a good impression of these craft at work. Their normal cargoes consisted of coal inwards, lightering the collier brigs at Yarmouth, and corn and flour outwards, plus timber, bricks, and all sorts of SEA HISTORY, SUMMER 1980