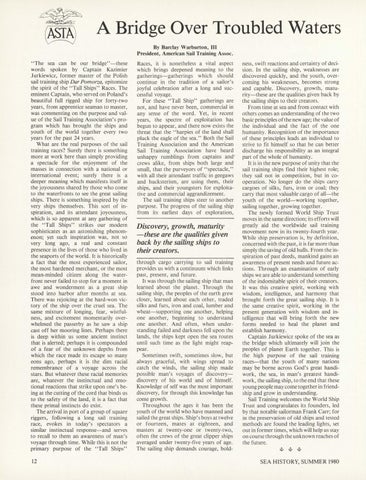 &quot;The sea can be our bridge&quot;-these words spoken by Captain Kazimier Jurkiewicz, former master of the Polish sail training ship Dar Pomorza, epitomize the spirit of the &quot;Tall Ships&quot; Races. The eminent Captain, who served on Poland&#39;s beautiful full rigged ship for forty-two years, from apprentice seaman to master, was commenting on the purpose and value of the Sail Training Association&#39;s program which has brought the ships and youth of the world together every two years for the past 24 years. What are the real purposes of the sail training races? Surely there is something more at work here than simply providing a spectacle for the enjoyment of the masses in connection with a national or international event; surely there is a deeper meaning which manifests itself in the joyousness shared by those who come to the waterfronts to see the great sailing ships. There is something inspired by the very ships themselves. This sort of inspiration, and its attendant joyousness, which is so apparent at any gathering of the &quot;Tall Ships&quot; strikes our modern sophisticates as an astonishing phenomenon; yet such inspiration was, not so very long ago, a real and constant presence in the lives of those who lived in the seaports of the world. It is historically a fact that the most experienced sailor, the most hardened merchant, or the most mean-minded citizen along the waterfront never failed to stop for a moment in awe and wonderment as a great ship stood into harbor after months at sea. There was rejoicing at the hard-won victory of the ship over the cruel sea. The same mixture of longing, fear, wistfulness, and excitement momentarily overwhelmed the passerby as he saw a ship cast off her mooring lines. Perhaps there is deep within us some ancient instinct that is alerted; perhaps it is compounded of a fear of the unknown depths from which the race made its escape so many eons ago, perhaps it is the dim racial remembrance of a voyage across the stars. But whatever these racial memories are, whatever the instinctual and emotional reactions that strike upon one&#39;s being at the cutting of the cord that binds us to the safety of the land, it is a fact that these primal instincts do exist. The arrival in port of a group of square riggers, following a long sail training race, evokes in today&#39;s spectators a similar instinctual response-and serves to recall to them an awareness of man&#39;s voyage through time. While this is not the primary purpose of the &quot;Tall Ships&quot;

Races, it is nonetheless a vital aspect which brings deepened meaning to the gatherings-gatherings which should continue in the tradition of a sailor&#39;s joyful celebration after a long and successful voyage. For these &quot;Tall Ship&quot; gatherings are not, and have never been, commercial in any sense of the word. Yet, in recent years, the spectre of exploitation has begun to appear, and there now exists the threat that the &quot;harpies of the land shall pluck the eagle of the sea.&quot; Both the Sail Training Association and the American Sail Training Association have heard unhappy rumblings from captains and&#39; crews alike, from ships both large and small, that the purveyors of &quot;spectacle,&quot; with all their attendant traffic in geegaws and hucksterism, are using them, their ships, and their youngsters for exploitative and commercial aggrandizement. The sail training ships steer to another purpose. The progress of the sailing ship from its earliest days of exploration,

Discovery, growth, maturity -these are the qualities given back by the sailing ships to their creators. through cargo carrying to sail trammg provides us with a continuum which links past, present, and future. It was through the sailing ship that man learned about the planet. Through the sailing ship, the peoples of the earth grew closer, learned about each other, traded silks and furs, iron and coal, lumber and wheat-supporting one another, helping one another, beginning to understand one another. And often, when understanding failed and darkness fell upon the lands, the ships kept open the sea routes until such time as the light might reappear. Sometimes swift, sometimes slow, but always graceful, with wings spread to catch the winds, the sailing ship made possible man&#39;s voyages of discoverydiscovery of his world and of himself. Knowledge of self was the most important discovery, for through this knowledge has come growth. Throughout the ages it has been the youth of the world who have manned and sailed the great ships. Ship&#39;s boys at twelve or fourteen, mates at eighteen, and masters at twenty-one or twenty-two, often the crews of the great clipper ships averaged under twenty-five years of age. The sailing ship demands courage, bold-

ness, swift reactions and certainty of decision. In the sailing ship, weaknesses are discovered quickly, and the youth, overcoming his weaknesses, becomes strong and capable. Discovery, growth, maturity-these are the qualities given back by the sailing ships to their creators. From time at sea and from contact with others comes an understanding of the two basic principles of the new age; the value of the individual and the fact of the one .humanity. Recognition of the importance of these principles leads an individual to strive to fit himself so that he can better discharge his responsibility as an integral part of the whole of humanity. It is in the new purpose of unity that the sail training ships find their highest role; they sail not in competition, but in cooperation. No longer do the ships carry cargoes of silks, furs, iron or coal; they carry that most valuable cargo of all-the youth of the world-working together, sailing together, growing together. The newly formed World Ship Trust moves in the same direction; its efforts will greatly aid the worldwide sail training movement now in its twenty-fourth year. While ship preservation is, by definition, concerned with the past, it is far more than simply the saving of old hulls. From the inspiration of past deeds, mankind gains an awareness of present needs and future actions . Through an examination of early ships we are able to understand something of the indomitable spirit of their creators. It was this creative spirit, working with wisdom, intelligence, and harmony that brought forth the great sailing ship. It is the same creative spirit, working in the present generation with wisdom and intelligence that will bring forth the new forms needed to heal the planet and establish harmony. Captain Jurkiewicz spoke of the sea as the bridge which ultimately will join the peoples of planet Earth together. This is the high purpose of the sail training races-that the youth of many nations may be borne across God&#39;s great handiwork, the sea, in man&#39;s greatest handiwork, the sailing ship, to the end that these young people may come together in friendship and grow in understanding. Sail Training welcomes the World Ship Trust and congratulates its founders, led by that notable sailorman Frank Carr; for in the preservation of old ships and tested methods are found the leading lights, set out in former times, which will help us stay on course through the unknown reaches of the future.