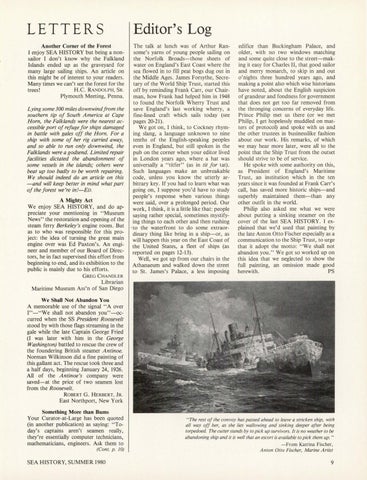 LETTERS Another Comer of the Forest I enjoy SEA HISTORY but being a nonsailor I don&#39;t know why the Falkland Islands ended up as the graveyard for many large sailing ships. An article on this might be of interest to your readers. Many times we can&#39;t see the forest for the trees! H.C. RANDOLPH, SR. Plymouth Meeting, Penna.

Lying some 300 miles downwind from the southern tip of South America at Cape Horn, the Falklands were the nearest accessible port of refuge for ships damaged in battle with gales off the Horn. For a ship with some of her rig carried away, and so able to run only downwind, the Falklands were a godsend. Limited repair facilities dictated the abandonment of some vessels in the islands; others were beat up too badly to be worth repairing. We should indeed do an article on this -and will keep better in mind what part of the forest we&#39;re inf-ED. A Mighty Act We enjoy SEA HISTORY, and do appreciate your mentioning in &quot;Museum News&quot; the restoration and opening of the steam ferry Berkeley&#39;s engine room. But as to who was responsible for this project: the idea of turning the great main engine over was Ed Paxton&#39;s. An engineer and member of our Board of Directors, he in fact supervised this effort from beginning to end, and its exhibition to the public is mainly due to his efforts. GREG CHANDLER Librarian Maritime Museum Ass&#39;n of San Diego

Editor&#39;s Log The talk at lunch was of Arthur Ransome&#39;s yarns of young people sailing on the Norfolk Broads-those sheets of water on England &#39;s East Coast where the sea flowed in to fill peat bogs dug out in the Middle Ages. James Forsythe, Secretary of the World Ship Trust, started this off by reminding Frank Carr, our Chairman, how Frank had helped him in 1948 to found the Norfolk Wherry Trust and save England&#39;s last working wherry, a fine-lined craft which sails today (see pages 20-21) . We got on, l think, to Cockney rhyming slang, a language unknown to nine tenths of the English-speaking peoples even in England, but still spoken in the pub on the corner when your editor lived in London years ago, where a hat was universally a &quot;titfer&quot; (as in tit for tat). Such languages make an unbreakable code, unless you know the utterly arbitrary key. If you had to learn what was going on, I suppose you&#39;d have to study people&#39;s response when various things were said, over a prolonged period. Our work, I think, it is a little like that: people saying rather special, sometimes mystifying things to each other and then rushing â&amp;#x20AC;˘to the waterfront to do some extraordinary thing like bring in a ship-or, as will happen this year on the East Coast of the United States, a fleet of ships (as reported on pages 12-13). Well, we got up from our chairs in the Athanaeum and walked down the street to St. James&#39;s Palace, a less imposing

edifice than Buckingham Palace, and older, with no two windows matching and some quite close to the street-making it easy for Charles II, that good sailor and merry monarch, to skip in and out o&#39;nights three hundred years ago, and making a point also which wise historians have noted, about the English suspicion of grandeur and fondness for government that does not get too far removed from the thronging concerns of everyday life. Prince Philip met us there (or we met Philip, I get hopelessly muddled on matters of protocol) and spoke with us and the other trustees in businesslike fashion about our work. His remarks, of which we may hear more later, were all to the point that the Ship Trust from the outset should strive to be of service. He spoke with some authority on this, as President of England&#39;s Maritime Trust, an institution which in the ten years since it was founded at Frank Carr&#39;s call, has saved more historic ships-and superbly maintained them-than any other outfit in the world. Philip also asked me what we were about putting a sinking steamer on the cover of the last SEA HISTORY . I explained that we&#39;d used that painting by the late Anton Otto Fischer especially as a communication to the Ship Trust, to urge that it adopt the motto: &quot;We shall not abandon you.&quot; We got so worked up on this idea that we neglected to show the full painting, an omission made good PS herewith.

We Shall Not Abandon You A memorable use of the signal &quot;A over I&quot;-&quot;We shall not abandon you&quot;-occurred when the SS President Roosevelt stood by with those flags streaming in the gale while the late Captain George Fried (I was later with him in the George Washington) battled to rescue the crew of the foundering British steamer Antinoe. Norman Wilkinson did a fine painting of this gallant act. The rescue took three and a half days, beginning January 24, 1926. All of the Antinoe&#39;s company were saved-at the price of two seamen lost from the Roosevelt. ROBERT G. HERBERT, JR. East Northport, New York Something More than Bums Your Curator-at-Large has been quoted (in another publication) as saying: &quot;Today&#39;s captains aren&#39;t seamen really, they&#39;re essentially computer technicians, mathematicians, engineers. Ask them to (Cont. p. 10)

&quot;The rest of the convoy has passed ahead to leave a stricken ship, with all way off her, as she lies wallowing and sinking deeper after being torpedoed. The culler stands by to pick up survivors. It is no weather to be abandoning ship and it is well that an escort is available to pick them up. &quot; -From Katrina Fischer, Anton Otto Fischer, Marine Artist