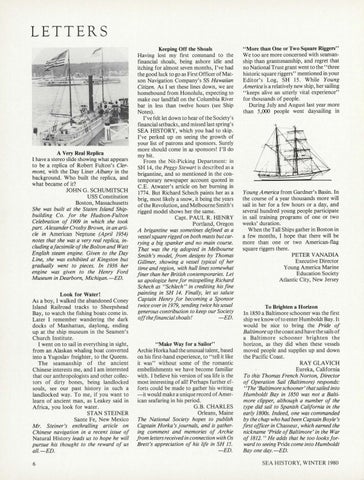 I have a stereo slide showing what appears to be a replica of Robert Fulton&#39;s Clermont, with the Day Liner Albany in the background. Who built the replica, and what became of it? JOHN G. SCHUMITSCH USS Constitution Boston, Massachusetts She was built at the Staten Island Shipbuilding Co. for the Hudson-Fulton Celebration of 1909 in which she took part. Alexander Crosby Brown, in an article in American Neptune (April 1954) notes that she was a very real replica, including a facsimile of the Bolton and Watt English steam engine. Given to the Day Line, she was exhibited at Kingston but gradually went to pieces. In 1936 her engine was given to the Henry Ford Museum in Dearborn, Michigan. -ED. Look for Water!

As a boy, I walked the abandoned Coney Island Railroad tracks to Sheepshead Bay, to watch the fishing boats come in. Later I remember wandering the dark docks of Manhattan, daylong, ending up at the ship museum in the Seamen&#39;s Church Institute. I went on to sail in everything in sight, from an Alaskan whaling boat converted into a Yugoslav freighter, to the Queens. The seamanship of the ancient Chinese interests me, and I am interested that our anthropologists and other collectors of dirty bones, being landlocked souls, see our past history in such a landlocked way. To me, if you want to learn of ancient man, as Leakey said in Africa, you look for water. ST AN STEINER Sante Fe, New Mexico Mr. Steiner&#39;s enthralling article on Chinese navigation in a recent issue of Natural History leads us to hope he will pursue his thought to the reward of us all.-ED. 6

Keeping Off the Shoals

&quot;More than One or Two Square Riggers&quot;

Having lost my first command to the financial shoals, being ashore idle and itching for almost seven months, I&#39;ve had the good luck to go as First Officer of Matson Navigation Company&#39;s SS Hawaiian Citizen. As I set these lines down, we are homebound from Honolulu, expecting to make our landfall on the Columbia River bar in less than twelve hours (see Ship Notes). I&#39;ve felt let down to hear of the Society&#39;s financial setbacks, and missed last spring&#39;s SEA HISTORY, which you had to skip. I&#39;ve perked up on seeing the growth of your list of patrons and sponsors. Surely more should come in as sponsors! I&#39;ll do my bit. From the Nit-Picking Department: in SH 14, the Peggy Stewart is described as a brigantine, and so mentioned in the contemporary newspaper account quoted in C.E. Atwater&#39;s article on her burning in 1774. But Richard Schech paints her as a brig, most likely a snow, it being the years of the Revolution, and Melbourne Smith&#39;s rigged model shows her the same. Capt. PAUL R. HENRY Portland, Oregon A brigantine was sometines defined as a vessel square rigged on both masts but carrying a big spanker and no main course. That was the rig adopted in Melbourne Smith&#39;s model, from designs by Thomas Gillmer, showing a vessel typical of her time and region, with hull lines somewhat finer than her British contemporaries. Let us apologize here for misspelling Richard Schech as &quot; Schlech&quot; in crediting his fine painting in SH 14. Finally, let us salute Captain Henry for becoming a Sponsor twice over in 1979, sending twice his usual generous contribution to keep our Society -ED. offthefinancialshoals!

We too are more concerned with seamanship than grantsmanship, and regret that no National Trust grant went to the&#39; &#39;three historic square riggers&quot; mentioned in your Editor&#39;s Log, SH 15 . While Young America is a relatively new ship, her sailing &quot;keeps alive an utterly vital experience&quot; for thousands of people. During July and August last year more than 5,000 people went daysailing in

&quot;Make Way for a Sailor&quot;

Archie Horka hadthe unusual talent, based on his first-hand experience, to &quot;tell it like it was&quot; without some of the romantic embellishments we have become familiar with. I believe his version of sea life is the most interesting of all! Perhaps further efforts could be made to gather his writing -it would make a unique record of American seafaring in his period. G.B . CHARLES Orleans, Maine The National Society hopes to publish Captain Horka &#39;s journals, and is gathering comment and memories of Archie from letters received in connection with Os Brett&#39;s appreciation of his life in SH 15. -ED.

Young America from Gardner&#39;s Basin. In the course of a year thousands more will sail in her for a few hours or a day, and several hundred young people participate in sail training programs of one or two weeks&#39; duration. When the Tall Ships gather in Boston in a few months, I hope that there will be more than one or two American-flag square riggers there. PETER VANADIA Executive Director Young America Marine Education Society Atlantic City, New Jersey

To Brighten a Horizon

In 1850 a Baltimore schooner was the first ship we know ofto enter Humboldt Bay. It would be nice to bring the Pride of Baltimore up the coast and have the sails of a Baltimore schooner brighten the horizon, as they did when these vessels moved people and supplies up and down the Pacific Coast. RAYGLAVICH Eureka, California To this Thomas French Norton, Director of Operation Sail (Baltimore) responds: &quot;The &#39;Baltimore schooner&#39; that sailed into Humboldt Bay in 1850 was not a Baltimore clipper, although a number of the type did sail to Spanish California in the early 1800s. Indeed, one was commanded by the chap who had been Captain Boyle&#39;s first officer in Chasseur, which earned the nickname &#39;Pride of Baltimore&#39; in the War of 1812. &quot; He adds that he too looks forward to seeing Pride come into Humboldt Bay one day. -ED. SEA HISTORY, WINTER 1980