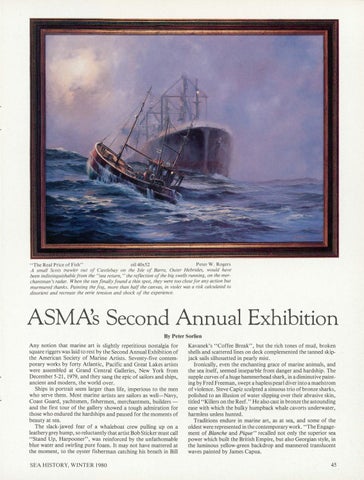 &quot;The Real Price of Fish&quot; oil 40x52 Peter W. Rogers A small Scots trawler our of Castlebay on the Isle of Barra, Outer Hebrides, would have been indistinguishable from the &quot;sea return,&quot; the reflection of the big swells running, on the merchantman&#39;s radar. Wh en the sun finally found a thin spot, they were loo close for any action but murmured thanks. Painting the fo g, more than half the canvas, in violet was a risk calculated to disorient and recreate the eerie tension and shock of !he experience.

Any notion that marine art is slightly repetitious nostalgia for square riggers was laid to rest by the Second Annual Exhibition of the American Society of Marine Artists. Seventy-five contemporary works by forty Atlantic, Pacific and Great Lakes artists were assembled at Grand Central Galleries, New York from December 5-21, 1979, and they sang the epic of sailors and ships, ancient and modern, the world over. Ships in portrait seem larger than life, imperious to the men who serve them. Most marine artists are sailors as well-Navy, Coast Guard, yachtsmen, fishermen, merchantmen, builders and the first tour of the gallery showed a tough admiration for those who endured the hardships and paused for the moments of beauty at sea. The slack-jawed fear of a whaleboat crew pulling up on a leathery grey hump, so reluctantly that artist Bob Sticker must call &quot;Stand Up, Harpooner&quot;, was reinforced by the unfathomable blue water and swirling pure foam. It may not have mattered at the moment, to the oyster fisherman catching his breath in Bill SEA HISTORY, WINTER 1980

Kavanek&#39;s &quot;Coffee Break&quot;, but the rich tones of mud, broken shells and scattered lines on deck complemented the tanned skipjack sails silhouetted in pearly mist. Ironically, even the enchanting grace of marine animals, and the sea itself, seemed inseparble from danger and hardship. The supple curves of a huge hammerhead shark, in a diminutive painting by Fred Freeman, swept a hapless pearl diver into a maelstrom of violence. Steve Capiz sculpted a sinuous trio of bronze sharks, polished to an illusion of water slipping over their abrasive skin, titled &quot;Killers on the Reef.&quot; He also cast in bronze the astounding ease with which the bulky humpback whale cavorts underwater, harmless unless hunted. Traditions endure in marine art, as at sea, and some of the oldest were represented in the contemporary work. &quot;The Engagement of Blanche and Pique&quot; recalled not only the superior sea power which built the British Empire, but also Georgian style, in the luminous yellow-green backdrop and mannered translucent waves painted by James Capua.