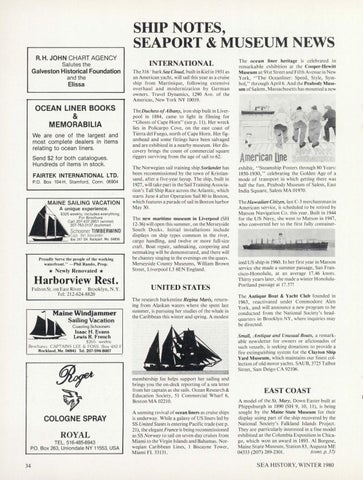 &amp; MEMORABILIA We are one of the largest and most complete dealers in items relating to ocean liners. Send $2 for both catalogues. Hundreds of items in stock. FAIRTEK INTERNATIONAL LTD. P.O. Box 104-H, Stamford, Conn. 06904

The 316 &#39; bark Sea Cloud, built in Kiel in 1931 as an American yacht, will sail this year as a cruise ship from Martinique, following extens ive overhaul and modernization by German owners. Travel Dyna mics, 1290 Ave. of the Americas, New York NY 10019. The Duchess of Albany, iron ship built in Liverpool in 1884, came to light in filming for &quot;Ghosts of Cape Horn &quot; (see p. 11) . Her wreck lies in Policarpo Cove, on the east coast of Tierra de! Fuego, north of Cape Horn. Her figurehead and some fittings have been sa lvaged and are ex hibit ed in a nearby museum. Her discovery brings the count of commercial square riggers surviving from the age of sail to 62. The Norwegian sail training ship Sorlandet has been recommiss ioned by the town of Kristiansand , after a five-year layup. The ship, built in 1927, will take part in the Sail Training Assoc iation&#39;s Tall Ship Race across the Atlantic, which starts June 4 after Operation Sa il 80 in Boston , which features a parade of sail in Boston harbor May 30. The new maritime museum in Liverpool (SH 12-36) wi ll open this summer, on the Merseyside South Docks. Initial in stallations include di splays on ship types common in the river, cargo handling, and twelve or more full-size cra ft. Boat repair, sailmaking, coopering and netmaking will be demonstrated, and there will be chantey singi ng in the evenings on the quays. Merseyside County Museum s, William Brown Street, Liverpool L3 SEN England.

exhibit, &quot;Steamship Posters through 80 Years: 1850-1 930,&quot; celebrating the Golden Age of a mode of transport iri which getting there was half the fun . Peabody Museum of Salem, East India Square, Salem MA 01970. The Hawaiian Citizen, last C-3 mercha ntman in America n service, is scheduled to be retired by Matso n N avigatio n Co. this year. Built in 1944 for the US Navy, she went to Matson in 1947, who converted her to the first fully container-

ized US ship in 1960. In her first year in Matson service she made a summer passage, San Francisco-Honolulu, a t a n average 17 .46 knots. Thirty years later, she made a winter HonoluluPortland passage at 17 .57 !

The research barkentine Regina Maris, returning from Alaskan waters where she spent last summer, is pursuing her studies of the whale in the Carib bean this winter and spring. A modest

membership fee helps support her sailing and brings you the on-deck report ing of a sea letter from her captain as she sails. Ocean Research &amp; Education Society, 51 Commercial Wharf 6, Boston MA 02210.

The Antique Boat &amp; Yacht Club founded in 1963, reactivated under Commodore Alen York, a nd will announce a new program to be conducted from the National Society&#39;s headquarters in Brooklyn NY, where inquiries may be directed.

A seeming revival of ocean liners as cruise ships is underway. While a galaxy of US liners led by SS United States is entering Paci fic trade (seep. 2 1), the elegant France is being recommiss io ned as SS Norway to sai l on seven-day cru ises from Miami to the Virgin Islands and Bahamas. Norwegian Caribbean Lines, I Biscayne Tower, Miami FL 33131.

EAST COAST A model of the St. Mary, Down Easter built at Phippsburgh in 1890 (SH 9, IO, 11), is being sought by the Maine State Museum for their disp lay using part of the ship recovered by the National Society&#39;s Falkland Isla nds Project. They are particularly interested in a fine model exhibited at the Columbia Exposition in Chicago, which won an award in 1893. Al Borgese, Maine State Museum , Station 83, Augusta ME 04333 (207) 289-2301. (cont. p. 37)