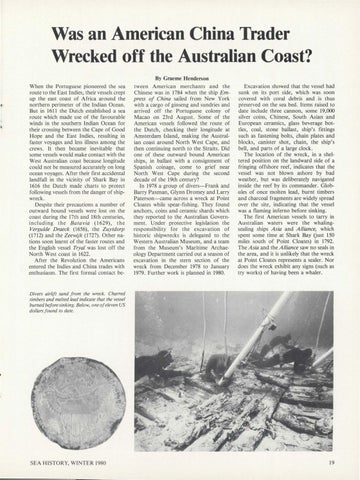 Was an American China Trader Wrecked off the Australian Coast? When the Portuguese pioneered the sea route to the East Indies, their vessels crept up the east coast of Africa around the northern perimeter of the Indian Ocean. But in 1611 the Dutch established a sea route which made use of the favourable winds in the southern Indian Ocean for their crossing between the Cape of Good Hope and the East Indies, resulting in faster voyages and less illness among the crews. It then became inevitable that some vessels would make contact with the West Australian coast because longitude could not be measured accurately on long ocean voyages. After their first accidental landfall in the vicinity of Shark Bay in 1616 the Dutch made charts to protect following vessels from the danger of shipwreck. Despite their precautions a number of outward bound vessels were lost on the coast during the 17th and 18th centuries, including the Batavia (1629), the Vergu/de Draeck (1656), the Zuytdorp (1712) and the Zeewijk (1727). Other nations soon learnt of the faster routes and the English vessel Tryal was lost off the North West coast in 1622. After the Revolution the Americans entered the Indies and China trades with enthusiasm. The first formal contact be-

By Graeme Henderson tween American merchants and the Chinese was in 1784 when the ship Empress of China sailed from New York with a cargo of ginseng and sundries and arrived off the Portuguese colony of Macao on 23rd August. Some of the American vessels followed the route of the Dutch, checking their longitude at Amsterdam Island, making the Australian coast around North West Cape, and then continuing north to the Straits. Did one of these outward bound American ships, in ballast with a consignment of Spanish coinage, come to grief near North West Cape during the second decade of the 19th century? In 1978 a group of divers-Frank and Barry Paxman, Glynn Dromey and Larry Paterson-came across a wreck at Point Cloates while spear-fishing. They found anchors, coins and ceramic shards which they reported to the Australian Government. Under protective legislation the responsibility for the excavation of historic shipwrecks is delegated to the Western Australian Museum, and a team from the Museum&#39;s Maritime Archaeology Department carried out a season of excavation in the stern section of the wreck from December 1978 to January 1979. Further work is planned in 1980.

Excavation showed that the vessel had sunk on its port side, which was soon covered with coral debris and is thus preserved on the sea bed. Items raised to date include three cannon, some 19,000 silver coins, Chinese, South Asian and European ceramics, glass beverage bottles, coal, stone ballast, ship&#39;s fitti ngs such as fastening bolts, chain plates and blocks, canister shot, chain, the ship&#39;s bell, and parts of a large clock. The location of the wreck, in a sheltered position on the landward side of a fringing offshore reef, indicates that the vessel was not blown ashore by bad weather, but was deliberately navigated inside the reef by its commander. Glob-ules of once molten lead, burnt timbers and charcoal fragments are widely spread over the site, indicating that the vessel was a flaming inferno before sinking. The first American vessels to tarry in Australian waters were the whalingsealing ships Asia and Alliance, which spent some time at Shark Bay Uust 150 miles south of Point Cloates) in 1792. The Asia and the Alliance saw no seals in the area, and it is unlikely that the wreck at Point Cloates represents a sealer. Nor does the wreck exhibit any signs (such as try works) of having been a whaler.

Divers airlift sand from the wreck. Charred timbers and melted lead indicate that the vessel burned before sinking. Below, one of eleven US dollars found to date.