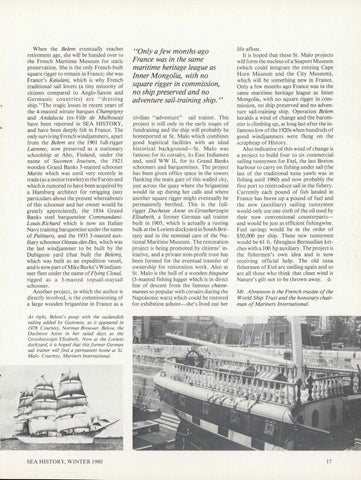 When the Belem eventually reaches retirement age, she will be handed over to the French Maritime Museum for static preservation. She is the only French-built square rigger to remain in France; she was France&#39;s Kaiulani, which is why French traditional sail lovers (a tiny minority of citizens compared to Anglo-Saxon and Germanic countries) are &quot;dressing ship.&quot;The tragic losses in recent years of the 4-masted nitrate barques Champigny and Andalucia (ex-Ville de Mu/house) have been reported in SEA HISTORY, and have been deeply felt in France. The only surviving French windjammers, apart from the Belem are the 1901 full-rigger Laennec, now preserved as a stationary schoolship at Abo, Finland, under the name of Suomen Joutsen, the 1921 wooden Grand Banks 3-masted schooner Marite which was until very recently in trade (as a motor trawler) in the Farnes and which is rumored to have been acquired by a Hamburg architect for rerigging (any particulars about the present whereabouts of this schooner and her owner would be greatly appreciated), the 1934 Grand Banks steel barquentine CommandantLouis-Richard which is now an Italian Navy training barquentine under the name of Palinuro, and the 1935 3-masted auxiliary schooner Oiseau-des-Iles, which was the last windjammer to be built by the Dubigeon yard (that built the Belem), which was built as an expedition vessel, and is now part of Mike Burke&#39;s Windjammer fleet under the name of Flying Cloud, rigged as a 3-masted topsail-staysail schooner. Another project, in which the author is directly involved, is the commissioning of a large wooden brigantine in France as a

&quot;Only a few months ago France was in the same maritime heritage league as Inner Mongolia, with no square rigger in commission, no ship preserved and no adventure sail-training ship. &quot; civilian &quot;adventure&quot; sail trainer. This project is still only in the early stages of fundraising and the ship will probably be homeported at St. Malo which combines good logistical facilities with an ideal historical background-St. Malo was famous for its corsairs, its East Indiamen and, until WW II, for its Grand Banks schooners and barquentines. The project has been given office space in the towers flanking the main gate of this walled city, just across the quay where the brigantine would tie up during her calls and where another square rigger might eventually be permanently berthed. This is the fullrigger Duchesse Anne ex-Grossherzogin Elisabeth, a former German sail trainer built in 1903, which is actually a rusting hulk at the Lorient dockyard in South Brittany and in the nominal care of the National Maritime Museum. The restoration project is being promoted by citizens&#39; initiative, and a private non-profit trust has been formed for the eventual transfer of ownership for restoration work. Also at St. Malo is the hull of a wooden bisquine (3-masted fishing lugger which is in direct line of descent from the famous chassemarees so popular with corsairs during the Napoleonic wars) which could be restored for exhibition ashore-she&#39;s lived out her

life afloat. It is hoped that these St. Malo projects will form the nucleus of a Seaport Museum (which could integrate the existing Cape Horn Museum and the City Museum), which will be something new in France. Only a few months ago France was in the same maritime heritage league as Inner Mongolia, with no square rigger in commission, no ship preserved and no adventure sail-training ship. Operation Belem heralds a wind of change and the barometer is climbing up, at long last after the infamous low of the 1920s when hundreds of good windjammers were flung on the scrapheap of History. Also indicative of this wind of change is a project to build four to six commercial sailing tunnymen for Etel, the last Breton harbour to carry on fishing under sail (the last of the traditional tuna yawls was in fishing until 1960) and now probably the first port to reintroduce sail in the fishery. Currently each pound of fish landed in France has burnt up a pound of fuel and the new (auxiliary) sailing tunnymen would only use one sixth of the oil used by their now conventional counterpartsand would be just as efficient fishingwise. Fuel savings would be in the order of $50,000 per ship. These new tunnymen would be 61 ft. fibreglass Bermudian ketches with a 100 hp auxiliary. The project is the fishermen&#39;s own idea and is now receiving official help. The old tuna fishermen of Etel are smiling again and so are all those who think that clean wind is Nature&#39;s gift not to be thrown away. .J:..

Mr. Abranson is the French trustee of the World Ship Trust and the honorary chairman of Mariners International.

At right, Belem&#39;s poop with the outlandish railing added by Guinness, as it appeared in 1978. Courtesy, Norman Brouwer. Below, the Duchesse Anne in her salad days as the Grossherzogin Elisabeth. Now at the Lorient dockyard, it is hoped that this former German sail trainer will find a permanent home at St. Malo. Courtesy, Mariners International.