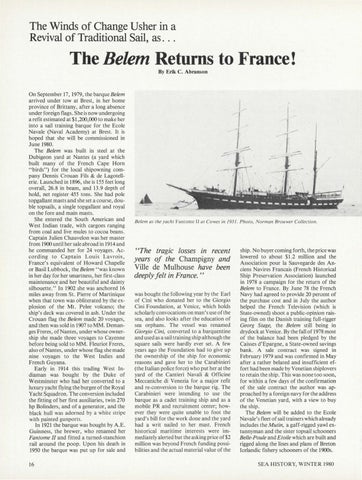 The Winds of Change Usher in a Revival of Traditional Sail, as ...

The Belem Returns to France! By Erik C. Abranson

On September 17, 1979, the barque Belem arrived under tow at Brest, in her home province of Brittany, after a long absence under foreign flags. She is now undergoing a refit estimated at $1,200,000 to make her into a sail training barque for the Ecole Navale (Naval Academy) at Brest. It is hoped that she will be commissioned in June 1980. The Belem was built in steel at the Dubigeon yard at Nantes (a yard which built many of the French Cape Horn &quot;birds&quot;) for the local shipowning company Dennis Crouan Fils &amp; de Lagotellerie. Launched in 1896, she is 155 feet long overall, 26.8 in beam, and 13.9 depth of hold, net register 455 tons. She had pole topgallant masts and she set a course, double topsails, a single topgallant and royal on the fore and main masts . She entered the South American and West Indian trade, with cargoes ranging from coal and live mules to cocoa beans . Captain Julien Chauvelon was her master from 1900 until her sale abroad in 1914and he commanded her for 24 voyages. According to Captain Louis Lavroix, France&#39;s equivalent of Howard Chapelle or Basil Lubbock, the Belem &quot;was known in her day for her smartness, her first-class maintenance and her beautiful and dainty silhouette.&quot; In 1902 she was anchored 16 miles away from St. Pierre of Martinique when that town was obliterated by the explosion of the Mt. Pelee volcano; the ship&#39;s deck was covered in ash. Under the Crouan flag the Belem made 20 voyages, and then was sold in 1907 to MM . Demanges Freres, of Nantes, under whose ownership she made three voyages to Cayenne before being sold to MM . Fleuriot Freres, also of Nantes, under whose flag she made nine voyages to the West Indies and French Guyana. Early in 1914 this trading West Indiaman was bought by the Duke of Westminster who had her converted to a luxury yacht flying the burgee of the Royal Yacht Squadron. The conversion included the fitting of her first auxiliaries, twin 270 hp Bolinders, and of a generator, and the black hull was adorned by a white stripe with painted gunports. In 1921 the barque was bought by A.E. Guinness, the brewer, who renamed her Fantome II and fitted a turned-stanchion rail around the poop. Upon his death in 1950 the barque was put up for sale and 16

&quot;The tragic losses in recent years of the Champigny and Ville de Mulhouse have been deeply felt in France. &quot; was bought the following year by the Earl of Cini who donated her to the Giorgio Cini Foundation, at Venice, which holds scholarly convocations on man&#39;s use of the sea, and also looks after the education of sea orphans. The vessel was renamed Giorgio Cini, converted to a barquentine and used as a sail training ship although the square sails were hardly ever set. A few years ago the Foundation had to give up the ownership of the ship for economic reasons and gave her to the Carabinieri (the Italian police force) who put her at the yard of the Cantieri Navali &amp; Officine Meccaniche di Venezia for a major refit and re-conversion to the barque rig. The Carabinieri were intending to use the barque as a cadet training ship and as a mobile PR and recruitment center; however they were quite unable to foot the yard&#39;s bill for the work done and the yard had a writ nailed to her mast. French historical maritime interests were immediately alerted but the asking price of$2 million was beyond French funding possibilities and the actual material value of the

ship. No buyer coming forth, the price was lowered to about $1.2 million and the Association pour la Sauvegarde des Anciens Navires Francais (French Historical Ship Preservation Association) launched in 1978 a campaign for the return of the Belem to France. By June 78 the French Navy had agreed to provide 20 percent of the purchase cost and in July the author helped the French Television (which is State-owned) shoot a public-opinion raising film on the Danish training full-rigger Georg Stage, the Belem still being in drydock at Venice. By the fall of 1978 most of the balance had been pledged by the Caisses d&#39;Epargne, a State-owned savings bank. A sale contract was signed in February 1979 and was confirmed in May after a rather belated and insufficient effort had been made by Venetian shiplovers to retain the ship. This was none too soon, for within a few days of the confirmation of the sale contract the author was approached by a foreign navy for the address of the Venetian yard, with a view to buy the ship. The Belem will be added to the Ecole Na vale&#39;s fleet of sail trainers which already includes the Mutin, a gaff-rigged yawl extunnyman and the sister topsail schooners Belle-Poule and Etoile which are built and rigged along the lines and plans of Breton Icelandic fishery schooners of the 1900s. SEA HISTORY, WINTER 1980