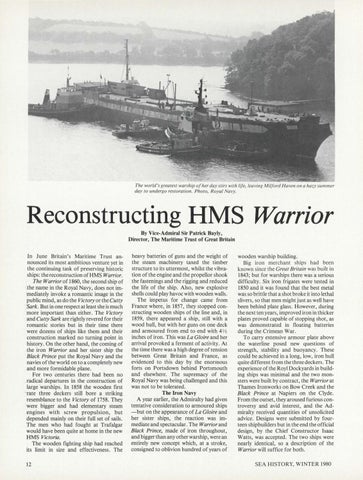 Reconstructing HMS Warrior By Vice-Admiral Sir Patrick Bayly, Director, The Maritime Trust of Great Britain In June Britain&#39;s Maritime Trust announced its most ambitious venture yet in the continuing task of preserving historic ships: the reconstruction of HMS Warrior. The Warrior of 1860, the second ship of the name in the Royal Navy, does not immediately invoke a romantic image in the public mind, as do the Victory or the Cutty ÂˇSark. But in one respect at least she is much more important than either. The Victory and Cutty Sark are rightly revered for their romantic stories but in their time there were dozens of ships like them and their construction marked no turning point in history. On the other hand, the coming of the iron Warrior and her sister ship the Black Prince put the Royal Navy and the navies of the world on to a completely new and more formidable plane. For two centuries there had been no radical departures in the construction of large warships. In 1858 the wooden first rate three deckers still bore a striking resemblance to the Victory of 1758. They were bigger and had elementary steam engines with screw propulsion, but depended mainly on their full set of sails. The men who had fought at Trafalgar would have been quite at home in the new HMS Victoria. The wooden fighting ship had reached its limit in size and effectiveness. The 12

heavy batteries of guns and the weight of the steam machinery taxed the timber structure to its uttermost, whilst the vibration of the engine and the propellor shook the fastenings and the rigging and reduced the life of the ship. Also, new explosive shells could play havoc with wooden walls. The impetus for change came from France where, in 1857, they stopped constructing wooden ships of the line and, in 1859, there appeared a ship, still with a wood hull, but with her guns on one deck and armoured from end to end with 4Yi inches of iron. This was La Gloire and her arrival provoked a ferment of activity. At the time there was a high degree of tension between Great Britain and France, as evidenced to this day by the enormous forts on Portsdown behind Portsmouth and elsewhere. The supremacy of the Royal Navy was being challenged and this was not to be tolerated. The Iron Navy A year earlier, the Admiralty had given tentative consideration to armoured ships -but on the appearance of La Gloire and her sister ships, the reaction was immediate and spectacular. The Warrior and Black Prince, made of iron throughout, and bigger than any other warship, were an entirely new concept which, at a stroke, consigned to oblivion hundred of years of

wooden warship building. Big iron merchant ships had been known since the Great Britain was built in 1843; but for warships there was Âˇa serious difficulty. Six iron frigates were tested in 1850 and it was found that the best metal was so brittle that a shot broke it into lethal slivers, so that men might just as well have been behind plate glass. However, during the next ten years, improved iron in thicker plates proved capable of stopping shot, as was demonstrated in floating batteries during the Crimean War. To carry extensive armour plate above the waterline posed new questions of strength, stability and buoyancy. These could be achieved in a long, low, iron hull quite different from the three deckers. The experience of the Roy! Dockyards in building ships was minimal and the two monsters were built by contract, the Warrior at Thames Ironworks on Bow Creek and the Black Prince at Napiers on the Clyde. From the outset, they aroused furious controversy and avid interest, and the Admiralty received quantities of unsolicited advice. Designs were submitted by fourteen shipbuilders but in the end the official design, by the Chief Constructor Isaac Watts, was accepted. The two ships were nearly identical, so a description of the Warrior will suffice for both. SEA HISTORY, WINTER 1980