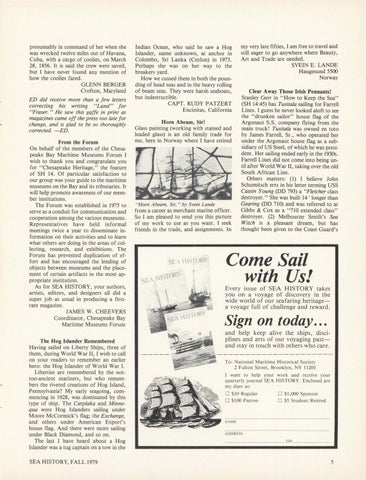 presumably in command of her when she was wrecked twelve miles out of Havana, Cuba, with a cargo of coolies, on March 28, 1856. It is said the crew were saved, but I have never found any mention of how the coolies fared. GLENN BERGER Crofton, Maryland

ED did receive more than a few letters correcting his writing &quot;Land&quot; for &quot;Fraser. &quot; He saw this gaffe in print as magazines came off the press too late for change, and is glad to be so thoroughly corrected. -ED. From the Forum

On behalf of the members of the Chesapeake Bay Maritime Museums Forum I wish to thank you and congratulate you for &quot;Chesapeake Heritage,&quot; the feature of SH 14. Of particular satisfaction to our group was your guide to the maritime museums on the Bay and its tributaries. It will help promote awareness of our member institutions. The Forum was established in 1975 to serve as a conduit for communication and cooperation among the various museums. Representatives have held informal meetings twice a year to disseminate information on their activities and to learn what others are doing in the areas of collecting, research, and exhibitions. The Forum has prevented duplication of effort and has encouraged the lending of objects between museums and the placement of certain artifacts in the most appropriate institution. As for SEA HISTORY, your authors, artists, editors, and designers all did a super job as usual in producing a firstrate magazine. JAMES W. CHEEVERS Coordinator, Chesapeake Bay Maritime Museums Forum The Hog Islander Remembered

Having sailed on Liberty Ships, three of them, during World War II, I wish to call on your readers to remember an earlier hero: the Hog Islander of World War I. Liberties are remembered by the nottoo-ancient mariners, but who remembers the riveted creations of Hog Island, Pennsylvania? My early seagoing, commencing in 1928, was dominated by this type of ship. The Carp/aka and Minnequa were Hog Islanders sailing under Moore McCormick&#39;s flag; the Exchange, and others under American Export&#39;s house flag. And there were more sailing under Black Diamond, and so on. The last I have heard about a Hog Islander was a tug captain on a tow in the SEA HISTORY, FALL 1979

Indian Ocean, who said he saw a Hog Islander, name unknown, at anchor in Colombo, Sri Lanka (Ceylon) in 1973. Perhaps she was on her way to the breakers yard. How we cussed them in both the pounding of head seas and in the heavy rolling of beam seas. They were harsh seaboats, but indestructible. CAPT. RUDY PATZERT Encinitas, California Horn Abeam, Sir!

Glass painting (working with stained and leaded glass) is an old family trade for me, here in Norway where I have retired

from a career as merchant marine officer. So I am pleased to send you this picture of my work to use as you want. I seek friends in the trade, and assignments. In

my very late fifties, I am free to travel and still eager to go anywhere where Beauty, Art and Trade are needed. SVEIN E. LANDE Haugesund 5500 Norway Clear A way Those Irish Pennants!

Stanley Gerr in &quot;How to Keep the Sea&quot; (SH 14:45) has Tusitala sailing for Farrell Lines. I guess he never looked aloft to see the &quot;drunken sailor&quot; house flag of the Argonaut S.S. company flying from the main truck! Tusita/a was owned en toto by James Farrell, Sr., who operated her under the Argonaut house flag as a subsidiary of US Steel, of which he was president. Her sailing ended early in the 1930s. Farrell Lines did not come into being until after World War II, taking over the old South African Line. Others matters: (I) I believe John Schumitsch errs in his letter terming USS Cassin Young (DD 793) a &quot;Fletcher class destroyer.&quot; She was built 14 &#39; longer than Gearing (DD 710) and was referred to at Gibbs &amp; Cox as a &quot;710 extended class&quot; destroyer. (2) Melbourne Smith&#39;s Sea Witch is a pleasant dream, but has thought been given to the Coast Guard&#39;s

Come Sail with Us!

Every issue of SEA HISTORY takes you on a voyage of discovery in the wide world of our seafaring heritagea voyage full of challenge and reward.

Sign on today ... and help keep alive the ships, disciplines and arts of our voyaging pastand stay in touch with others who care. To: National Maritime Hi storical Society 2 Fulton Street, Brooklyn, NY 11201 1 want to help your work and receive your quarterly journal SEA HISTORY. Enclosed are my dues as: D $10 Regular D $100 Patron