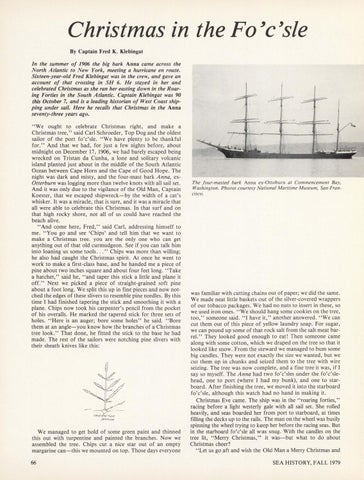 In the summer of 1906 the big bark Anna came across the North Atlantic to New York, meeting a hurricane en route. Sixteen-year-old Fred Klebingat was in the crew, and gave an account of that crossing in SH 6. He stayed in her and celebrated Christmas as she ran her easting down in the Roaring Forties in the South Atlantic. Captain Klebingat was 90 this October 7, and is a leading historian of West Coast shipping under sail. Here he recalls that Christmas in the Anna seventy-three years ago. &quot;We ought to celebrate Christmas right, and make a Christmas tree,&#39;&#39; said Carl Schroeder, Top Dog and the oldest sailor of the port fo&#39;c&#39;sle. &quot;We have plenty to be thankful for.&quot; And that we had, for just a few nights before, about midnight on December 17, 1906, we had barely escaped being wrecked on Tristan da Cunha, a lone and solitary volcanic island planted just about in the middle of the South Atlantic Ocean between Cape Horn and the Cape of Good Hope. The night was dark and misty, and the four-mast bark Anna, exOtterburn was logging more than twelve knots with all sail set. And it was only due to the vigilance of the Old Man, Captain Koester, that we escaped shipwreck-by the width of a cat&#39;s whisker. It was a miracle, that is sure, and it was a miracle that all were able to celebrate this Christmas. In that surf and on that high rocky shore, not all of us could have reached the beach alive. &quot;And come here, Fred,&quot; said Carl, addressing himself to me. &quot;You go and see &#39;Chips&#39; and tell him that we want to make a Christmas tree. you are the only one who can get anything out of that old curmudgeon. See if you can talk him into loaning us some tools . .. &quot; Chips was more than willing; he also had caught the Christmas spirit. At once he went to work to make a first-class base, and he handed me a piece of pine about two inches square and about four feet long. &quot;Take a hatchet,&quot; said he, &quot;and taper this stick a little and plane it off.&quot; Next we picked a piece of straight-grained soft pine about a foot long. We split this up in fine pieces and now notched the edges of these slivers to resemble pine needles. By this time I had finished tapering the stick and smoothing it with a plane. Chips now took his carpenter&#39;s pencil from the pocket of his overalls. He marked the tapered stick for three sets of holes. &quot;Here is an auger; bore some holes&quot; he said. &quot;Bore them at an angle-you know how the branches of a Christmas tree look.&quot; That done, he fitted the stick to the base he had made. The rest of the sailors were notching pine slivers with their sheath knives like this :

We managed to get hold of some green paint and thinned this out with turpentine and painted the branches. Now we assembled the tree. Chips cut a nice star out of an empty margarine can-this we mounted on top. Those days everyone 66

was familiar with cutting chains out of paper; we did the same. We made neat little baskets out of the silver-covered wrappers of our tobacco packages. We had no nuts to insert in these, so we used iron ones. &quot;We should hang some cookies on the tree, too,&quot; someone said. &quot;I have it,&quot; another answered. &quot;We can cut them out of this piece of yellow laundry soap. For sugar, we can pound up some of that rock salt from the salt meat barrel.&quot; They looked good enough to eat! Then someone came along with some cotton, which we draped on the tree so that it looked like snow. From the steward we managed to bum some big candles. They were not exactly the size we wanted, but we cut them up in chunks and seized them to the tree with wire seizing. The tree was now complete, and a fine tree it was, if I say so myself. The Anna had two fo&#39;c&#39;sles under the fo&#39;c&#39;slehead, one to port (where I had my bunk), and one to starboard . After finishing the tree, we moved it into the starboard fo&#39;c&#39;sle, although this watch had no hand in making it. Christmas Eve came. The ship was in the &quot;roaring forties,&quot; racing before a light westerly gale with all sail set. She rolled heavily, and seas boarded her from port to starboard, at times filling the decks up to the rails. The man on the wheel was busily spinning the wheel trying to keep her before the racing seas. But in the starboard fo&#39;c&#39;sle all wâ&amp;#x20AC;˘as snug. With the candles on the tree lit, &quot;Merry Christmas,&#39;&quot; it was-but what to do about Christmas cheer? &quot;Let us go aft and wish the Old Man a Merry Christmas and SEA HISTORY, FALL 1979