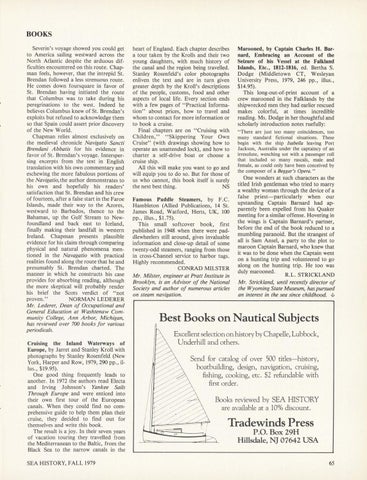 BOOKS Severin&#39;s voyage showed you could get to America sailing westward across the North Atlantic despite the arduous difficulties encountered on this route. Chapman feels, however, that the intrepid St. Brendan followed a less strenuous route. He comes down foursquare in favor of St. Brendan having initiated the route that Columbus was to take during his peregrinations to the west. Indeed he believes Columbus knew of St. Brendan&#39;s exploits but refused to acknowledge them so that Spain could assert prior discovery of the New World. Chapman relies almost exclusively on the medieval chronicle Navigato Sancti Brendani Abbatis for his evidence in favor of St. Brendan&#39;s voyage. Interspersing excerpts from the text in English translation with his own commentary and eschewing the more fabulous portions of the Navigatio, the author demonstrates to his own and hopefully his readers&#39; satisfaction that St. Brendan and his crew of fourteen, after a false start in the Faroe Islands, made their way to the Azores, westward to Barbados, thence to the Bahamas, up the Gulf Stream to Newfoundland and back east to Iceland, finally making their landfall in western Ireland. Chapman presents plausible evidence for his claim thr01,1gh comparing physical and natural phenomena mentioned in the Navagatio with practical realities found along the route that he and presumably St. Brendan charted. The manner in which he constructs his case provides for absorbing reading, although the more skeptical will probably render his brief the Scots verdict of &quot;not proven.&quot; NORMAN LEDERER Mr. Lederer, Dean of Occupational and General Education at Washtenaw Community College, Ann Arbor, Michigan, has reviewed over 700 books for various periodicals. Cruising the Inland Waterways of Europe, by Jarret and Stanley Kroll with photographs by Stanley Rosenfeld (New York, Harper and Row, 1979, 290 pp., illus., $19.95) . One good thing frequently leads to another. In 1972 the authors read Electa and Irving Johnson&#39;s Yankee Sails Through Europe and were enticed into their own first tour of the European canals. When they could find no comprehensive guide to help them plan their cruise, they decided to find out for themselves and write this book. The result is a joy. In their seven years of vacation touring they travelled from the Mediterranean to the Baltic, from the Black Sea to the narrow canals in the SEA HISTORY, FALL 1979

heart of England. Each chapter describes a tour taken by the Krolls and their two young daughters, with much history of the canal and the region being travelled. Stanley Rosenfeld&#39;s color photographs enliven the text and are in turn given greater depth by the Kroll&#39;s descriptions of the people, customs, food and other aspects of local life. Every section ends with a few pages of &quot;Practical Information&quot; about prices, how to travel and whom to contact for more information or to book a cruise. Final chapters are on &quot;Cruising with Children,&quot; &quot;Skippering Your Own Cruise&quot; (with drawings showing how to operate an unattended lock), and how to charter a self-drive boat or choose a cruise ship. All this will make you want to go and will equip you to do so. But for those of us who cannot, this book itself is surely NS the next best thing. Famous Paddle Steamers, by F.C. Hambleton (Allied Publications, 14 St. James Road, Watford, Herts, UK, 100 pp., illus., $1.75). This small softcover book, first published in 1948 when there were paddlewheelers still around, gives invaluable information and close-up detail of some twenty-odd steamers, ranging from those in cross-Channel service to harbor tugs. Highly recommended. CONRAD MILSTER Mr. Milster, engineer at Pratt Institute in Brooklyn, is an Advisor of the National Society and author of numerous articles on steam navigation.

This long-out-of-print account of a crew marooned in the Falklands by the shipwrecked men they had earlier rescued makes colorful, at times incredible reading. Ms. Dodge in her thoughtful and scholarly introduction notes ruefully: &quot;There are just too many coincidences, too many standard fictional situations. These begin with the ship Isabella leaving Port Jackson, Australia under the captaincy of an irresolute, wenching sot with a passenger roll that included so many rascals, male . and female, as could only have been conceived by the composer of a Beggar&#39;s Opera. &quot;

One wonders at such characters as the titled Irish gentleman who tried to marry a wealthy woman through the device of a false priest-particularly when our upstanding Captain Barnard had apparently been expelled from his Quaker meeting for a similar offense. Hovering in the wings is Captain Barnard&#39;s partner, before the end of the book reduced to a mumbling paranoid. But the strangest of all is Sam Ansel, a party to the plot to maroon Captain Barnard, who knew that it was to be done when the Captain went on a hunting trip and volunteered to go along on the hunting trip. He too was duly marooned. R.L. STRICKLAND Mr. Strickland, until recently director of the Wyoming State Museum, has pursued an interest in the sea since childhood. w

Best Books on Nautical Subjects Excellent selection on history by Chapelle, Lubbock, Underhill and others. Send for catalog of over 500 titles-history, boatbuilding, design, navigation, cruising, fishing, cooking, etc. $2 refundable with first order. Books reviewed by SEA HISTORY are available at a 10% discount.