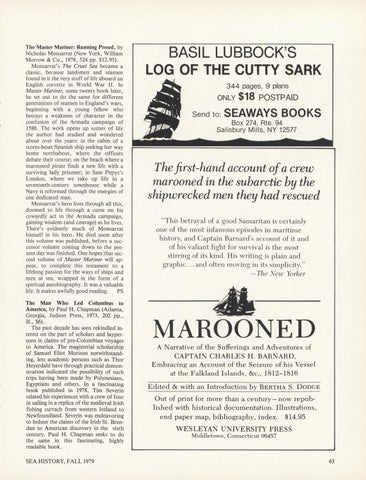 The Master Mariner: Running Proud, by Nicholas Monsarrat (New York, William Morrow &amp; Co., 1978, 524 pp. $12.95). Monsarrat&#39;s The Cruel Sea became a classic, because landsmen and seamen found in it the very stuff of life aboard an English corvette in World War II. In Master Mariner, some twenty book later, he set out to do the same for different generations of seamen in England&#39;s wars, beginning with a young fellow who betrays a weakness of character in the confusion of the Armada campaign of 1588. The work opens up scenes of life the author had studied and wondered about over the years: in the cabin of a storm-beset Spanish ship seeking her way home northabout, where the officers debate their course; on the beach where a marooned pirate finds a new life with a surviving lady prisoner; in Sam Pepys&#39;s London, where we take up life in a seventeeth-century townhouse while a Navy is reformed through the energies of one dedicated man . Monsarrat&#39;s hero lives through all this, doomed to life through a curse on his cowardly act in the Armada campaign, gaining wisdom (and courage) as he lives. There&#39;s evidently much of Monsarrat himself in his hero. He died soon after this volume was published, before a successor volume coming down to the present day was finished . One hopes that second volume of Master Mariner will appear, to complete this testament to a lifelong passion for the ways of ships and men at sea, wrapped in the form of a spiritual autobiography. It was a valuable life. It makes awfully good reading. PS The Man Who Led Columbus to America, by Paul H. Chapman (Atlanta, Georgia, Judson Press, 1973, 202 pp., ill., $6). The past decade has seen rekindled interest on the part of scholars and laypersons in claims of pre-Columbian voyages to America. The magisterial scholarship of Samuel Eliot Morison notwithstanding, less academic persons such as Thor Heyerdahl have through practical demonstration indicated the possibility of such trips having been made by Polynesians, Egyptians and others. In a fascinating book published in 1978, Tim Severin related his experiences with a crew of four in sailing in a replica of the medieval Irish fishing currach from western Ireland to Newfoundland . Severin was endeavoring to bolster the claims of the Irish St. Brendan to American discovery in the sixth century. Paul H. Chapman seeks to do the same in this fascinating, highly readable book . SEA HISTORY, FALL 1979

The first-hand account of a crew marooned in the subarctic by the shipwrecked men they had rescued &quot; This betrayal of a good Samaritan is certainly one of the most infamous episodes in maritime history, and Captain Barnard&#39;s account of it and of his valiant fight for survival is the most stirring of its kind. His writing is plain and graphic . .. and often moving in its simplicity.&quot;

MAROONED A Narrative of the Sufferings and Adventures of CAPTAIN CHARLES H. BARNARD, Embracing an Account of the Seizure of his Vessel at the Falkland Islands, &amp;c., 1812-1816 Edited &amp; with an Introduction by BERTHA S. DODGE Out of print for more than a century- now republished with historical documentation. Illustrations, end paper map, bibliography, index. $14.95 WESLEYAN UNIVERSITY PRESS Middletown, Connecticut 06457