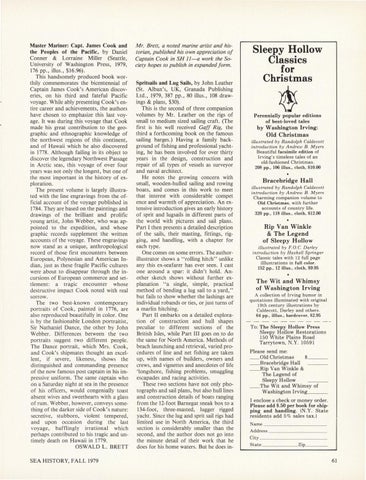 Master Mariner: Capt. James Cook and the Peoples of the Pacific, by Daniel Conner &amp; Lorraine Miller (Seattle, University of Washington Press, 1979, 176 pp., illus., $16.96). This handsomely produced book worthily commemorates the bicentennial of Captain James Cook&#39;s American discoveries, on his third and fateful Pacific voyage. While ably presenting Cook&#39;s entire career and achievements, the authors have chosen to emphasize this last voyage. It was during this voyage that Cook made his great contribution to the geographic and ethnographic knowledge of the northwest regions of this continent, and of Hawaii which he also discovered in 1778. Although failing in its object to discover the legendary Northwest Passage in Arctic seas, this voyage of over four years was not only the longest, but one of the most important in the history of exploration. The present volume is largely illustrated with the line engravings from the official account of the voyage published in 1784. They are based on the paintings and drawings of the brilliant and prolific young artist, John Webber, who was appointed to the expedition, and whose graphic records supplement the written accounts of the voyage. These engravings now stand as a unique, anthropological record of those first encounters between European, Polynesian and American Indian, just as these fragile Pacific cultures were about to disappear through the incursions of European commerce and settlement : a tragic encounter whose destructive impact Cook noted with real sorrow. The two best-known contemporary portraits of Cook, painted in 1776, are also reproduced beautifully in color. One is by the fashionable London portraitist, Sir Nathaniel Dance, the other by John Webber. Differences between the two portraits suggest two different people. The Dance portrait, which Mrs. Cook, and Cook&#39;s shipmates thought an excellent, if severe, likeness, shows the distinguished and commanding presence of the now famous post captain in his impressive uniform. The same captain who on a Saturday night at sea in the presence of his officers, would congenially toast absent wives and sweethearts with a glass of rum. Webber, however, conveys something of the darker side of Cook&#39;s nature: secretive, stubborn, violent tempered , and upon occasion during the last voyage, bafflingly irrational which perhaps contributed to his tragic and untimely death on Hawaii in 1779. OSWALD L. BRETT SEA HISTORY, FALL 1979

Mr. Brett, a noted marine artist and historian, published his own appreciation of Captain Cook in SH 11-a work the Society hopes to publish in expanded form . Spritsails and Lug Sails, by John Leather (St. Alban&#39;s, UK, Granada Publishing Ltd., 1979, 387 pp ., 80 illus., 108 drawings &amp; plans, $30). This is the second of three companion volumes by Mr. Leather on the rigs of small to medium sized sailing craft. (The first is his well received Gaff Rig, the third a forthcoming book on the famous sailing barges .) Having a family background of fishing and professional yachting, he has been involved for over thirty years in the design, construction and repair of all types of vessels as surveyor and naval architect. He notes the growing concern with small, wooden-hulled sailing and rowing boats, and comes in this work to meet that interest with considerable compet ence and warmth of appreciation. An extensive introduction gives an early history of sprit and lugsails in different parts of the world with pictures and sail plans . Part I then presents a detailed description of the sails, their masting, fittings, rigging, and handling, with a chapter for each type. One comes on some errors. The authorillustrator shows a &quot;rolling hitch&quot; unlike any this ex-seafarer has ever seen. I cast one around a spar: it didn&#39;t hold . Another sketch shows without further explanation &quot;a single, simple, practical method of bending a lug sail to a yard,&quot; but fails to show whether the lashings are individual robands or ties, or just turns of a marlin hitching. Part II embarks on a detailed exploration of construction and hull shapes peculiar to different sections of the British Isles, while Part III goes on to do the same for North America . Methods of beach launching and retrieval, varied procedures of line and net fishing are taken up, with names of builders, owners and crews, and vignettes and anecdotes of life &#39;longshore, fishing problems, smuggling escapades and racing activities. These two sections have not only photographs and sail plans, but also hull lines and construction details of boats ranging from the 12-foot Barnegat sneak box to a 134-foot, three-masted, lugger rigged yacht. Since the lug and sprit sail rigs had limited use in North America, the third section is considerably smaller than the second, and the author does not go into the minute detail of their work that he does for his home waters. But he does in-

The Wit and Whimsy of Washington Irving A collection of Irving humor in quotations illuminated with original 19th century illustrations by Ca ldecott, Darley and others. 64 pp., illlus., hardcover, $2.95