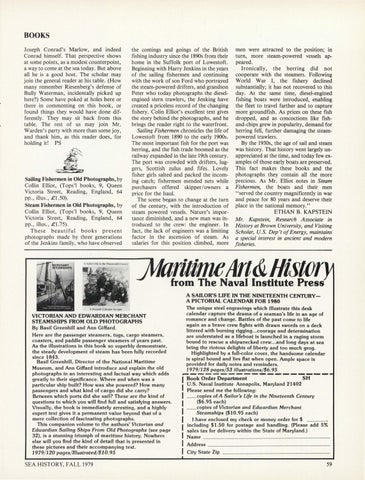 BOOKS Joseph Conrad&#39;s Marlow, and indeed Conrad himself. That perspective shows at some points, as a modest counterpoint, a way to come at the sea today. But above all he is a good host. The scholar may join the general reader at his table. (How many remember Riesenberg&#39;s defense of Bully Waterman, incidentally picked up here?) Some have poked at holes here or there in commenting on this book, or found things they would have done differently. They may sit back from this table. The rest of us may join Mr. Warden&#39;s party with more than some joy, and thank him, as this reader does, for holding it! PS

the comings and goings of the British fishing industry since the 1890s from their home in the Suffolk port of Lowestoft. Beginning with Harry Jenkins in the years of the sailing fishermen and continuing with the work of son Ford who portrayed the steam-powered drifters, and grandson Peter who today photographs the dieselengined stern trawlers, the Jenking have created a priceless record of the changing fishery. Colin Elliot&#39;s excellent text gives the story behind the photographs, and he brings the reader right to the waterfront. Sailing Fishermen chronicles the life of Lowestoft from 1890 to the early 1900s. The most important fish for the port was herring, and the fish trade boomed as the railway expanded in the late 19th century. The port was crowded with drifters, luggers, Scottish zulus and fifes. Lovely fisher girls salted and packed the incoming catch; fishermen mended nets while purchasers offered skipper/ owners a price for the haul. The scene began to change at the turn of the century, with the introduction of steam powered vessels. Nature&#39;s importance diminished, and a new man was introduced to the crew: the engineer. In fact, the lack of engineers was a limiting factor in the ascension of steam. As salaries for this position climbed, more

VICTORIAN AND EDWARDIAN MERCHANT STEAMSHIPS FROM OLD PHOTOGRAPHS By Basil Greenhill and Ann Giffard. Here are the passenger steamers, tugs, cargo steamers, coasters, and paddle passenger steamers of years past. As the illustrations in this book so superbly demonstrate, the steady development of steam has been fully recorded since 1843. Basil Greenhill, Director of the National Maritime Museum, and Ann Giffard introduce and explain the old photographs in an interesting and factual way which adds greatly to their significance. Where and when was a particular ship built? How was she powered? How many passengers and what kind of cargo did she carry? Between which ports did she sail? These are the kind of questions to which you will find full and satisfying answers. Visually, the book is immediately arresting, and a highly expert text gives it a permanent value beyond that of a mere collection of fascinating photographs. This companion volume to the authors&#39; Victorian and Edwardian Sailing Ships From Old Photographs (see page 32), is a stunning triumph of maritime history. Nowhere else will you find the kind of detail that is presented in these pictures and their accompanying text. 1979/120 pages/lllustrated/$10.95

men were attracted to the pos1t10n; in turn, more steam-powered vessels appeared. Ironically, the herring did not cooperate with the steamers. Following World War I, the fishery declined substantially; it has not recovered to this day. At the same time, diesel-engined fishing boats were introduced, enabling the fleet to travel farther and to capture more groundfish. As prices on these fish dropped, and as concoctions like fishand-chips grew in popularity, demand for herring fell, further damaging the steampowered trawlers. By the 1930s, the age of sail and steam was history. That history went largely unappreciated at the time, and today few examples of those early boats are preserved. This fact makes these books and the photographs they contain all the more precious. As Mr. Elliot notes in Steam Fishermen, the boats and their men &quot;served the country magnificently in war and peace for 80 years and deserve their place in the national memory.&quot; ETHAN B. KAPSTEIN Mr. Kapstein, Research Associate in History at Brown University, and Visiting Scholar, U.S. Dep &#39;t of Energy, maintains a special interest in ancient and modern fisheries.

A SAILOR&#39;S LIFE IN THE NINETEENTH CENTURYA PICTORIAL CALENDAR FOR 1980 The unique steel engravings which illustrate this desk calendar capture the drama of a seaman&#39;s life in an age of romance and change. Battles of the past come to life again as a brave crew fights with drawn swords on a deck littered with burning rigging ... courage and determination are understated as a lifeboat is launched in a raging storm bound to rescue a shipwrecked crew ... and long days at sea bring the riotous delights of liberty and too much grog. Highlighted by a full-color cover, the handsome calendar is spiral bound and lies flat when open. Ample space is provided for daily notes and reminders. ,,__1979/ 128 pages/53 illustrations/$6. 95