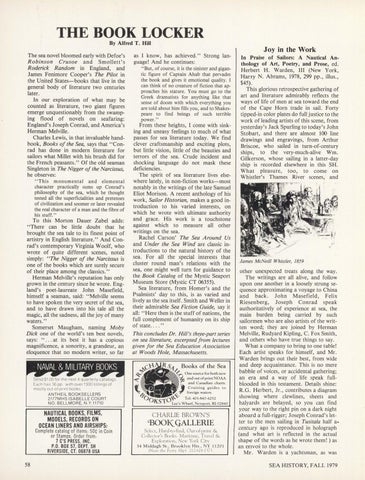 THE BOOK LOCKER By Alfred T. Hill The sea novel bloomed early with Defoe&#39;s Robinson Crusoe and Smollett &#39; s Roderick Random in England, and James Fenimore Cooper&#39;s The Pilot in the United States~books that live in the general body of literature two centuries later. In our exploration of what may be counted as literature, two giant figures emerge unquestionably from the swamping flood of novels on seafaring: England&#39;s Joseph Conrad, and America&#39;s Herman Melville. Charles Lewis, in that invaluable handbook, Books of the Sea, says that &quot;Conrad has done in modern literature for sailors what Millet with his brush did for the French peasants.&quot; Of the old seaman Singleton in The Nigger of the Narcissus, he observes: &quot;This monumental and elemental character practically sums up Conrad&#39;s philosophy of the sea, which he thought tested all the superficialities and pretenses of civilization and soomer or later revealed the real character of a man and the fibre of his stuff.&quot;

To this Morton Dauer Zabel adds: &#39;&#39;There can be little doubt that he brought the sea tale to its finest point of artistry in English literature.&quot; And Conrad&#39;s contemporary Virginia Woolf, who wrote of quite different scenes, noted simply: &quot;The Nigger of the Narcissus is one of the books which are surely secure of their place among the classics.&#39;&#39; Herman Melville&#39;s reputation has only grown in the century since he wrote. England&#39;s poet-laureate John Masefield, himself a seaman, said: &quot;Melville seems to have spoken the very secret of the sea, and to have drawn into his tale all the magic, all the sadness, all the joy of many waters .&quot; Somerset Maugham, naming Moby Dick one of the world&#39;s ten best novels, says: &quot; . . . at its best it has a copious magnificence, a sonority, a grandeur, an eloquence that no modern writer, so far

Joy in the Work as I know, has achieved.&quot; Strong language! And he continues: &quot; But, of course, it is the sinister and gigantic figure of Captain Ahab that pervades the book and gives it emotional quality. I can think of no creature of fiction that approaches his stature. You must go to the Greek dramatists for anything like that sense of doom with which everything you are told about him fills you, and to Shakespeare to find beings of such terrible power.&quot;

From these heights, I come with sinking and uneasy feelings to much of what passes for sea literature today. We find clever craftsmanship and exciting plots, but little vision, little of the beauties and terrors of the sea. Crude incident and shocking language do not mask these deficiencies . The spirit of sea literature lives elsewhere lately, in non-fiction works-most notably in the writings of the late Samuel Eliot Morison. A recent anthology of his work, Sailor Historian, makes a good introduction to his varied interests, on which he wrote with ultimate authority and grace. His work is a touchstone against which to measure all other writings on the sea. Rachel Carson&#39; The Sea Around Us and Under the Sea Wind are classic introductions to the natural history of the sea. For all the special interests that cluster round man&#39;s relations with the sea, one might well turn for guidance to the Book Catalog of the Mystic Seaport Museum Store (Mystic CT 06355). Sea literature, from Homer&#39;s and the Psalmists&#39; day to this, is as varied and lively as the sea itself. Smith and Weller in their admirable Sea Fiction Guide, say it all: &quot;Here then is the stuff of nations, the full complement of humanity on its ship of state .. . . &quot; This concludes Dr. Hill&#39;s thr:ee-part series on sea literature, excerpted from lectures given for the Sea Education Association at Woods Hole, Massachusetts. Books of the Sea

In Praise of Sailors: A Nautical Anthology of Art, Poetry, and Prose, ed . Herbert H. Warden, III (New York, Harry N. Abrams, 1978, 299 pp., illus., $45). This glorious retrospective gathering of art and literature admirably reflects the ways of life of men at sea toward the end of the Cape Horn trade in sail. Forty tipped-in color plates do full justice to the work of leading artists of this scene, from yesterday&#39;s Jack Spurling to today&#39;s John Stobart, and there are almost 100 line drawings and engravings, from Arthur Briscoe, who sailed in turn-of-century ships, to the very-much-alive Wm. Gilkerson, whose sailing in a latter-day ship is recorded elsewhere in this SH. What pleasure, too, to come on Whistler&#39;s Thames River scenes, and

other unexpected treats along the way. The writings are all alive, and follow upon one another in a loosely strung sequence approximating a voyage to China and back. John Masefield, Felix Riesenberg, Joseph Conrad speak authoritatively of experience at sea, the main burden being carried by such sailormen who are also artists of the written word; they are joined by Herman Melville, Rudyard Kipling, C. Fox Smith, and others who have true things to say. What a company to bring to one table! Each artist speaks for himself, and Mr. Warden brings out their best, from wide and deep acquaintance. This is no mere babble of voices, or accidental gathering; an era and a way of life speak fullblooded in this testament. Details shine: R.G. Herbert, Jr ., contributes a diagram showing where clewlines, sheets and halyards are belayed, so you can find your way to the right pin on a dark night aboard a full-rigger; Joseph Conrad&#39;s letter to the men sailing in Tusitala half a• century ago is reproduced in holograph (and what art is reflected in the actual shape of the words as he wrote them! ) as an envoi to the whole. Mr. Warden is a yachtsman, as was SEA HISTORY, FALL 1979