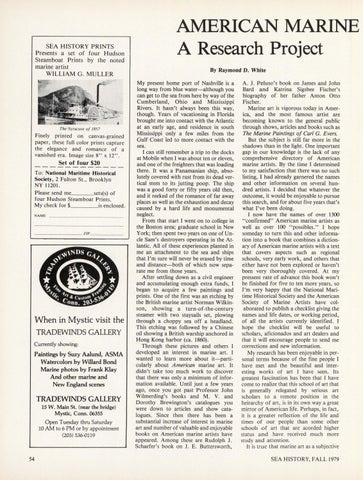 When in Mystic visit the TRADEWINDS GALLERY Currently showing:

AMERICAN MARINE A Research Project By Raymond D. White My present home port of Nashville is a long way from blue water-although you can get to the sea from here by way of the Cumberland, Ohio and Mississippi Rivers. It hasn&#39;t always been this way, though. Years of vacationing in Florida brought me into contact with the Atlantic at an early age, and residence in south Mississippi only a few miles from the Gulf Coast led to more contact with the sea. I can still remember a trip to the docks at Mobile when I was about ten or eleven, and one of the freighters that was loading there. It was a Panamanian ship, absolutely covered with rust from its dead vertical stem to its jutting poop . The ship was a good forty or fifty years old then, and it reeked of the romance of far away places as well as the exhaustion and decay caused by a hard life and monumental neglect. From that start I went on to college in the Boston area; graduate school in New York; then spent two years on one of Uncle Sam&#39;s destroyers operating in the Atlantic. All of these experiences planted in me an attachment to the sea and ships that I&#39; m sure will never be erased by time and distance-both of which now separate me from those years. After settling down as a civil engineer and accumulating enough extra funds, I began to acquire a few paintings and prints. One of the first was an etching by the British marine artist Norman Wilkinson, showing a turn-of-the-century steamer with two staysails set, plowing through a choppy sea off a headland . This etching was followed by a Chinese oil showing a British warship anchored in Hong Kong harbor (ca. 1860). Through these pictures and others I developed an interest in marine art. I wanted to learn more about it-particularly about American marine art. It didn&#39; t take too much work to discover that there was only a minimum of information available. Until just a few years ago, once you got past Professor John Wilmerding&#39;s books and M. V. and Dorothy Brewington&#39; s catalogues you were down to articles and show catalogues. Since then there has been a substantial increase of interest in marine art and number of valuable and enjoyable books on American marine artists have appeared. Among these are Rudolph J. Schaefer&#39;s book on J . E . Buttersworth,

A. J. Peluso&#39;s book on James and John Bard and Katrina Sigsbee Fischer&#39;s biography of her father Anton Otto Fischer. Marine art is vigorous today in America, and the most famous artist are becoming known to the general public through shows, articles and books such as The Marine Paintings of Carl G. Evers. But the subject is still far more in the shadows than in the light. One important gap in our knowledge is the lack of any comprehensive directory of American marine artists. By the time I determined to my satisfaction that there was no such listing, I had already garnered the names and other information on several hundred artists. I decided that whatever the outcome, it would be enjoyable to pursue this search, and for about five years that&#39;s what I&#39;ve been doing. I now have the names of over 1300 &quot;confirmed&quot; American marine artists as well as over 100 &quot;possibles.&quot; I hope someday to turn this and other information into a book that combines a dictionary of American marine artists with a text that covers aspects such as regional schools, very early work, and others that either have not been explored or haven&#39;t been very thoroughly covered . At my pressent rate of advance this book won&#39;t be finished for five to ten more years, so I&#39;m very happy that the National Maritime Historical Society and the American Society of Marine Artists have colaborated to publish a checklist giving the names and life dates, or working period, of all the artists currently identified. I hope the checklist will be useful to scholars, aficionados and art dealers and that it will encourage people to send me corrections and new information. My research has been enjoyable in personal terms because of the fine people I have met and the beautiful and interesting works of art l have seen. Its greatest fascination has been that I have come to realize that this school of art that is generally relegated by serious art scholars to a remote position in the heirarchy of art, is in its own way a great mirror of American life. Perhaps, in fact, it is a greater reflection of the life and times of our people than some other schools o f art that are acorded higher status and have received much more study and attention . It is true that marine art as a subjective SEA HISTORY, FALL 1979