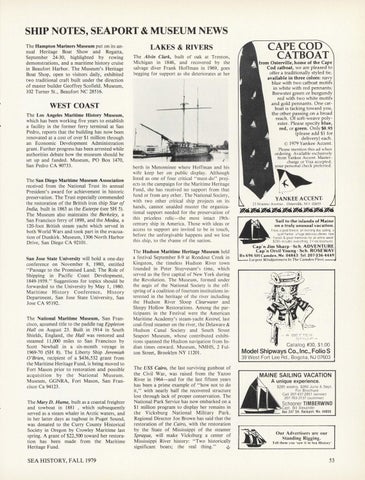 LAKES &amp; RIVERS The Alvin Clark, built of oak at Trenton, Michigan in 1846, and recovered by the salvage diver Frank Hoffman in 1969, goes begging for support as she deteriorates at her

from Osterville, home of the Cape Cod catboat, we are pleased to offer a traditionally styled tie, available in three colors: navy blue with two catboat motifs in white with red pennants; Brewster green or burgundy red with two white motifs and gold pennants. One catboat is tacking toward you, the other passing on a broad reach. Of soft-weave polyester. Please specify blue, red, or green. On ly $8.95 (please add $1 for delivery) each. © 1979 Yankee Accent.

WEST COAST The Los Angeles Maritime History Museum, which has been working five years to establish a facility in the former ferry terminal at San Pedro, reports that the building has now been renovated at a cost of over $1 million through an Economic Development Administration grant. Further progress has been arrested while authorities debate how the museum should be set up and funded. Museum, PO Box 1470, San Pedro CA 90733. The San Diego Maritime Museum Association received from the National Trust its annual President&#39;s award for achievement in historic preservation. The Trust especially commended the restoration of the British iron ship Star of India, built in 1863 as the Euterpe (see SH 5). The Museum also maintains the Berkeley, a San Francisco ferry of 1898, and the Medea, a 120-foot British steam yacht which served in both World Wars and took part in the evacuation of Dunkirk. Museum, 1306 North Harbor Drive, San Diego CA 92101. San Jose State University will hold a one-day conference on November 8, 1980, entitled &quot;Passage to the Promised Land; The Role of Shipping in Pacific Coast Development, 1849-1939.&quot; Suggestions for topics should be forwarded to the University by May 1, 1980. Maritime History Conference, History Department, San Jose State University, San Jose CA 95192. The National Maritime Museum, San Francisco, assumed title to the paddle tug Eppleton Hall on August 23. Built in 1914 in South Shields, England, the Hall was restored and steamed 11,000 miles to San Francisco by Scott Newhall in a six-month voyage in 1969-70 (SH 8). The Liberty Ship Jeremiah O&#39;Brien, recipient of a $436,532 grant from the Maritime Heritage Fund, is being moved to Fort Mason prior to restoration and possible acquisition by the National Mu seum . Museum, GGNRA, Fort Mason, San Francisco Ca 94123 . The Mary D. Hume, built as a coastal freighter and towboat in 1881 , which subsequently served as a steam whaler in Arctic waters, and in her latter days as tugboat in Puget Sound, was donated to the Curry County Historical Society in Oregon by Crowley Maritime last spring. A grant of $22,500 toward her restoration has been made from the Maritime Heritage Fund.

berth in Menominee where Hoffman and hi s wife keep her on public display. Although listed as one of four critical &quot;must-do&quot; projects in the campaign for the Maritime Heritage Fund, she has received no support from that fund or from any other. The National Society, with two other critical ship projects on its hands, cannot unaided muster the organi zational support needed for the preservation of thi s priceless relic-the most intact l 9thcentury ship in America. Those with ideas or access to support are invited to be in touch , before the unforgiva ble happens and we lose this ship, to the shame of the nation. The Hudson Maritime Heritage Museum held a festival September 8-9 at Rondout Creek in Kingston, the timeless Hudson River town founded in Peter Stuyvesant&#39;s time , which served as the first capital of New York during the Revolution. The Museum , formed under the aegis of the National Society is th e o ffspring of a coalition of fourteen institutions interested in the heritage of the river including the Hudson River Sloop Clearwater and Sleepy Hollow Restorations. Among the participants in the Fest ival were the American Maritime Academy&#39; s steam-yacht Kestrel, last coal-fired steamer on the river, the Delaware &amp; Hudson Cana l Society and South Street Seaport Museum, whose contributed exhibitions spanned the Hudson navigation from Indian times onward. Mu seum, NMHS, 2 Fulton Street, Brooklyn NY I 1201. The USS Cairo, the last surviving gunboat of the Civil War, was raised from the Yazoo River in 1964-and for the last fifteen years has been a prime example of &quot;how not to do it,&quot; with nearly half the recovered structure lost through lack of proper conservation. The National Park Service has now embarked on a $1 million program to display her remains in the Vicksburg National Military Park. Regional Director Joe Brown has said that the restoration of the Cairo, with the restoration by the State of Mississippi of the steamer Sprague, will make Vicksburg a center of Mississippi River history: &quot;Two historically significant boats; the real thing.&quot; .t

Sail to the islands of Maine on a truly unusual vacation.

Our Advertisers are our Standing Rigging, Tell lhem