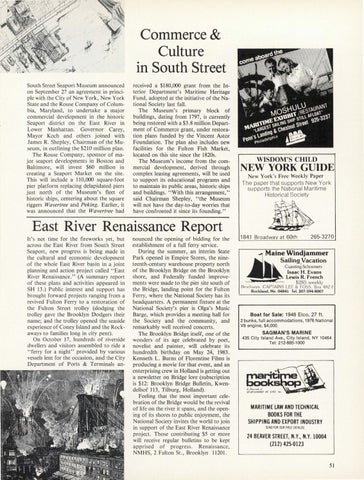 Commerce&amp; Culture in South Street South Street Seaport Museum announced on September 27 an agreement in principle with the City of New York, New York State and the Rouse Company of Columbia, Maryland, to undertake a major commercial development in the historic Seaport district on the East River in Lower Manhattan. Governor Carey, Mayor Koch and others joined with James R. Shepley, Chairman of the Museum , in outlining the $210 million plan. The Rouse Company, sponsor of major seaport developments in Boston and Baltimore, will invest $60 million in creating a Seaport Market on the site. This will include a 110,000 square-foot pier platform replacing delapidated piers just north of the Museum&#39;s fleet of historic ships, centering about the square riggers Wavertree and Peking. Earlier, it was announced that the Wavertree had

received a $180,000 grant from the Interior Department&#39;s Maritime Heritage Fund, adopted at the initiative of the National Society last fall. The Museum&#39;s primary block of buildings, dating from 1797, is currently being restored with a $3.8 million Department of Commerce grant, under restoration plans funded by the Vincent Astor Foundation. The plan also includes new facilities for the Fulton Fish Market, located on this site since the 1820s. The Museum&#39;s income from the commercial development, derived through complex leasing agreements, will be used to support its educational programs and to maintain its public areas, historic ships and buildings. &quot;With this arrangement,&quot; said Chairman Shepley, &quot;the Museum will not have the day-to-day worries that have confronted it since its founding.&quot;

East River Renaissance Report It&#39;s not time for the fireworks yet, but across the East River from South Street Seaport, new progress is being made in the cultural and economic development of the whole East River basin in a joint planning and action project called &quot;East River Renaissance.&#39;&#39; (A summary report of these plans and activities appeared in SH 13.) Public interest and support has brought forward projects ranging from a revived Fulton Ferry to a restoration of the Fulton Street trolley (dodging the trolley gave the Brooklyn Dodgers their name; and the trolley opened the seaside experience of Coney Island and the Rockaways to families long in city pent). On October 17, hundreds of riverside dwellers and visitors assembled to ride a &quot;ferry for a night&quot; provided by various vessels lent for the occasion, and the City Department of Ports &amp; Terminals an-

nounced the opening of bidding for the establishment of a full ferry service. During the summer, an interim State Park opened in Empire Stores, the nineteenth-century warehouse property north of the Brooklyn Bridge on the Brooklyn shore, and Federally funded improvements were made to the pier site south of the Bridge, landing point for the Fulton Ferry, where the National Society has its headquarters. A permanent fixture at the National Society&#39;s pier is Olga&#39;s Music Barge, which provides a meeting hall for the Society and the community, and remarkably well received concerts. The Brooklyn Bridge itself, one of the wonders of its age celebrated by poet, novelist and painter, will celebrate its hundredth birthday on May 1983. Kenneth L. Burns of Florentine Films is producing a movie for that event, and an enterprising crew in Holland is getting out a newsletter on Bridge lore (subscription is $12: Brooklyn Bridge Bulletin, Kwendelhof 113, Tilburg, Holland). Feeling that the most important celebration of the Bridge would be the revival of life on the river it spans, and the opening of its shores to public enjoyment, the National Society invites the world to join in support of the East River Renaissance project. Those contributing $5 or more will receive regular bulletins to be kept apprised of progress. Renaissance, NMHS, 2 Fulton St., Brooklyn 11201.