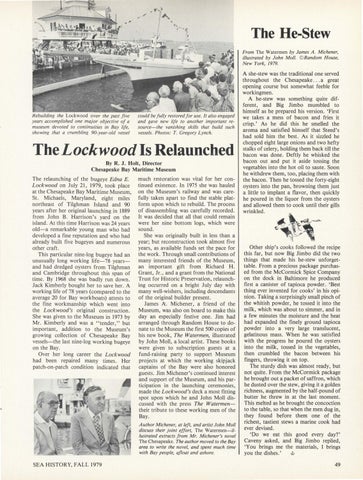 The He-Stew From The Watermen by James A. Michener, illustrated by John Moll. ÂŠRandom House, New York, 1979.

Rebuilding the Lockwood over the past five years accomplished one major objective of a museum devoted to continuities in Bay life, showing that a crumbling 90-year-old vessel

could be fully restored for use. It also engaged and gave new life to another important resource-the vanishing skills that build such vessels. Photos: T. Gregory Lynch.

The Lockwood Is Relaunched By R. J. Holt, Director Chesapeake Bay Maritime Museum The relaunching of the bugeye Edna E. Lockwood on July 21, 1979, took place at the Chesapeake Bay Maritime Museum, St. Michaeis, Maryland, eight miles northeast of Tilghman Island and 90 years after her original launching in 1889 from John B. Harrison&#39;s yard on the island . At this time Harrison was 24 years old-a remarkable young man who had developed a fine reputation and who had already built five bugeyes and numerous other craft. This particular nine-log bugeye had an unusually long working life-78 yearsand had dredged oysters from Tilghman and Cambridge throughout this span of time. By 1968 she was badly run down. Jack Kimberly bought her to save her. A working life of 78 years (compared to the average 20 for Bay workboats) attests to the fine workmanship which went into the Lockwood&#39;s original construction. She was given to the Museum in 1973 by Mr. Kimberly and was a &quot;tender,&quot; but important, addition to the Museum&#39;s growing collection of Chesapeake Bay vessels-the last nine-log working bugeye on the Bay. Over her long career the Lockwood had been repaired many times. Her patch-on-patch condition indicated that

much restoration was vital for her continued existence. In 1975 she was hauled on the Museum&#39;s railway and was carefully taken apart to find the stable platform upon which to rebuild. The process of disassembling was carefully recorded. It was decided that all that could remain were her nine bottom logs, which were sound. She was originally built in less than a year; but reconstruction took almost five years, as available funds set the pace for the work. Through small contributions of many interested friends of the Museum, an important gift from Richard H. Grant, Jr., and a grant from the National Trust for Historic Preservation, relaunching occurred on a bright July day with many well-wishers, including descendants of the original builder present. James A. Michener, a friend of the Museum, was also on board to make this day an especially festive one. Jim had arranged through Random House to donate to the Museum the first 500 copies of his new book, The Watermen, illustrated by John Moll, a local artist. These books were given to subscription guests at a fund-raising party to support Museum projects at which the working skipjack captains of the Bay were also honored guests. Jim Michener&#39;s continued interest and support of the Museum, and his participation in the launching ceremonies, made the Lockwood&#39;s deck a most fitting spot upon which he and John Moll discussed with the press The Watermentheir tribute to these working men of the Bay. Author Michener, at left, and artist John Moll discuss their joint effort, The Watermen-illustrated extracts from Mr. Michener&#39;s novel The Chesapeake. The author moved to the Bay area to write the novel, and spent much time with Bay people, afloat and ashore.

A she-stew was the traditional one served throughout the Chesapeake ... a great opening course but somewhat feeble for workingmen. A he-stew was something quite different, and Big Jimbo mumbled to himself as he prepared his version. &#39;First we takes a mess of bacon and fries it crisp.&#39; As he did this he smelled the aroma and satisfied himself that Steed&#39;s had sold him the best. As it sizzled he chopped eight large onions and two hefty stalks of celery, holding them back till the bacon was done. Deftly he whisked the bacon out and put it aside tossing the vegetables into the hot oil to saute. Soon he withdrew them, too, placing them with the bacon. Then he tossed the forty-eight oysters into the pan, browning them just a little to implant a flavor, then quickly he poured in the liquor from the oysters and allowed them to cook until their gills wrinkled .

Other ship&#39;s cooks followed the recipe this far, but now Big Jimbo did the two things that made his he-stew unforgettable. From a precious package purchased from the McCormick Spice Company on the dock in Baltimore he produced first a canister of tapioca powder. &#39;Best thing ever invented for cooks&#39; in his opinion. Taking a surprisingly small pinch of the whitish powder, he tossed it into the milk, which was about to simmer, and in a few minutes the moisture and the heat had expanded the finely ground tapioca powder into a very large translucent, gelatinous mass. When he was satisfied with the progress he poured the oysters into the milk, tossed in the vegetables, then crumbled the bacon between his fingers, throwing it on top. The sturdy dish was almost ready, but not quite. From the McCormick package he brought out a packet of saffron, which he dusted over the stew, giving it a golden richness, augmented by the half-pound of butter he threw in at the last moment. This melted as he brought the concoction to the table, so that when the men dug in, they found before them one of the richest, tastiest stews a marine cook had ever devised. &#39;Do we eat this good every day?&#39; Caveny asked, and Big Jimbo replied, &#39;You brings me the materials, I brings you the dishes.&#39; .t