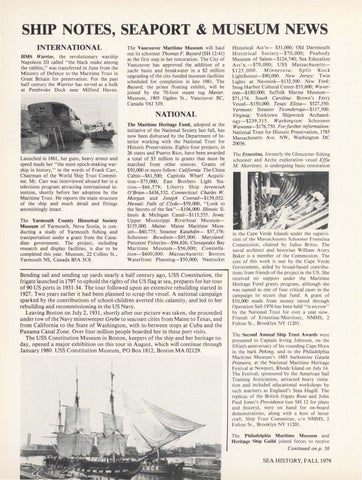 SHIP NOTES, SEAPORT &amp; MUSEUM NEWS INTERNATIONAL HMS Warrior, the revolutionary warship Napoleon III called &quot;the black snake among the rabbits,&quot; was transferred in June from the Ministry of Defence to the Maritime Trust in Great Britain for preservation. For the past half century the Warrior has served as a hulk at Pembroke Dock near Milford Haven.

The Vancouver Maritime Museum will haul out its schooner Thomas F. Bayard (SH 12:41) as the first step in her restoration. The City of Vancouver has approved the addition of a yacht basin and breakwater in a $2 million upgrading of the city-funded museum facilities scheduled for completion in late 1981. The Bayard, the prime floating exhibit, will be joined by the 70-foot steam tug Master. Museum, 1905 Ogden St., Vancouver BC, Canada V6J 319.

Launched in 1861, her guns, heavy armor and speed made her &quot;the most epoch-making warship in history,&quot; in the words of Frank Carr, Chairman of the World Ship Trust Committee. Mr. Carr was interviewed aboard her in a television program attracting international intention, shortly before her adoption by the Maritime Trust. He reports the main structure of the ship and much detail and fittings astonishingly intact. The Yarmouth County Historical Society Museum of Yarmouth, Nova Scotia, is conducting a study of Yarmouth fishing and transportation under a grant from the Canadian government. The project, including research and display facilities, is due to be completed this year. Museum, 22 Collins St., Yarmouth NS, Canada BSA 3C8.

The Maritime Heritage Fund, adopted at the initiative of the National Society last fall, has now been disbursed by the Department of Interior working with the National Trust for Historic Preservation . Eighty-four projects, in 26 states and Puerto Ri co, have been awarded a total of $5 million in grants that must be matched from other sources. Grants of $50,000 or more follow: California: The China Cabin-$61,500; Capitola Wharf Acquisition-$75,000; East Brothers Light Station-$66,579; Liberty Ship Jeremiah

Bending sail and sending up yards nearly a half century ago, USS Constitution, the frigate launched in 1797 to uphold the rights of the US flag at sea, prepares for her tour of 90 US ports in 1931-34. The tour followed upon an extensive rebuilding started in 1927. Two years earlier it had been planned to scrap the vessel. A national campaign sparked by the contributions of school-children averted this calamity, and led to her rebuilding and recommissioning in the US Navy. Leaving Boston on July 2, 1931, shortly after our picture was taken, she proceeded under tow of the Navy minesweeper Grebe to seacoast cities from Maine to Texas, and from California to the State of Washington, with in-between stops at Cuba and the Panama Canal Zone . Over four million people boarded her in these port visits. The USS Constitution Museum in Boston, keepers of the ship and her heritage today, opened a major exhibition on this tour in August, which will continue through January 1980. USS Constitution Museum, PO Box 1812, Boston MA 02129.

in the Cape Verde Islands under the supervision of th e Massachu sett s Schooner Ernestina Commission, chaired by Julius Britto. The naval architect and historian William Avery Baker is a member of the Commission. The cost of this work is met by the Cape Verde Government, aided by broad-based contributions from friends of the project in the US . She received no support under the Maritime Heritage Fund grants program, although she was named as one of four critical cases in the campaign to secure that fund. A grant of $10,000 made from money rai sed through Operation Sail-1976 has been held &quot;;n escrow&quot; by the National Trust for over a year now. Friends of Ernestina/ Morri ssey, NMHS , 2 Fulton St ., Brooklyn NY 1120 I. The Second Annual Ship Trust Awards were presented to Captain Irving Johnson, on the fiftieth anniversary of his rounding Cape Horn in the bark Peking, and to the Philadelphia Maritime Museum&#39; s 1883 barkentine Gaze/a Primeiro, at the National Maritime Heritage Festival at Newport, Rhode Island on Jul y 14. The Festival , sponsored by the American Sail Training Association , att racted heavy visitation and included educational workshops by such marin ers as England&#39;s Stan Hugill. The replicas of the British frigate Rose and John Paul Jones&#39;s Providence (see SH 12 for plans and history) , were on hand for on-board demonstrations, along with a host of lesser craft. Shi p Trust Committee, c/ o NMHS, 2 Fulton St. , Brooklyn NY 11201. Th e Philadelphia Maritime Museum and Heritmge Ship Guild joined forces to receive