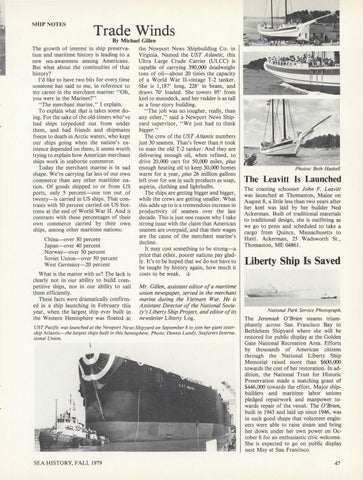 By Michael Gillen The growth of interest in ship preservathe Newport News Shipbuilding Co. in tion and maritime history is leading to a Virginia. Named the UST Atlantic, this new sea-awareness among Americans. Ultra Large Crude Carrier (ULCC) is capable of carrying 390,000 deadweight But what about the continuities of that history? tons of oil-about 20 times the capacity I&#39;d like to have two bits for every time of a World War II-vintage T-2 tanker. someone has said to me, in reference to She is 1,187&#39; long, 228&#39; in beam, and my career in the merchant marine: &quot;Oh, draws 70&#39; loaded. She towers 95&#39; from you were in the Marines?&#39;&#39; keel to maindeck, and her rudder is as tall &quot;The merchant marine,&quot; I explain. as a four-story building. To explain what that is takes some do&quot;The job was no tougher, really, than ing. For the sake of the old-timers who&#39;ve any other,&quot; said a Newport News Shiphad ships torpedoed out from under yard supervisor, &quot;We just had to think them, and had friends and shipmates bigger.&quot; The crew of the UST Atlantic numbers freeze to death in Arctic waters, who kept our ships going when the nation&#39; s exjust 30 seamen. That&#39;s fewer than it took istence depended on them, it seems worth to man the old T-2 tanker. And they are trying to explain how American merchant delivering enough oil, when refined, to ships work in seaborne commerce. drive 20,000 cars for 50,000 miles, plus Today the merchant marine is in sad enough heating oil to keep 30,000 homes shape. We&#39;re carrying far less of our own warm for a year, plus 26 million gallons commerce than any other maritime naleft over for use in such products as soap, tion. Of goods shipped to or from US aspirin, clothing and lightbulbs. The ships are getting bigger and bigger, ports, only 5 percent-one ton out of twenty-is carried in US ships. That conwhile the crews are getting smaller. What trasts with 50 percent carried on US botthis adds up to is a tremendous increase in toms at the end of World War II. And it productivity of seamen over the last contrasts with these percentages of their decade. This is just one reason why I take strong issue with the claim that American own commerce carried by their own ships, among other maritime nations: seamen are overpaid, and that their wages are the cause of the merchant marine&#39;s China-over 30 percent decline. Japan-over 40 percent It may cost something to be strong-a Norway-over 30 percent price that other, poorer nations pay gladSoviet Union-over 50 percent ly. It&#39;s to be hoped that we do not have to West Germany-20 percent be taught by history again, how much it costs to be weak. .t What is the matter with us? The lack is clearly not in our ability to build comMr. Gillen, assistant editor of a maritime petitive ships, nor in our ability to sail them efficiently. union newspaper, served in the merchant These facts were dramatically confirmmarine during the Vietnam War. He is ed in a ship launching in February this Assistant Director of the National Socieyear, when the largest ship ever built in ty&#39;s Liberty Ship Project, and editor of its newsletter Liberty Log. the Western Hemisphere was floated at UST Pacific was launched at the Newport News Shipyard on September 8 to join her giant sistership Atlantic-the largest ships built in this hemisphere. Photo: Dennis Lundy. Seafarers International Union .

The Leavitt Is Launched The coasting schooner John F. Leavitt was launched at Thomaston, Maine on August 8, a little less than two years after her keel was laid by her builder Ned Ackerman. Built of traditional materials to traditional design, she is outfitting as we go to press and scheduled to take a cargo from Quincy, Massachusetts to Haiti. Ackerman, 25 Wadsworth St., Thomaston, ME 04861.

The Jeremiah O&#39;Brien steams triumphantly across San Francisco Bay to Bethlehem Shipyard where she will be restored for public display at the Golden Gate National Recreation Area. Efforts by thousands of American citizens through the National Liberty Ship Memorial raised more than $600,000 towards the cost of her restoration. In addition, the National Trust for Historic Preservation made a matching grant of $446,000 towards the effort. Major shipbuilders and maritime labor unions pledged repairwork and manpower towards repair of the vessel. The O&#39;Brien, built in 1943 and laid up since 1946, was in such good shape that volunteer engineers were able to raise steam and bring her down under her own power on October 6 for an enthusiastic civic welcome. She is expected to go on public display next May at San Francisco. 47