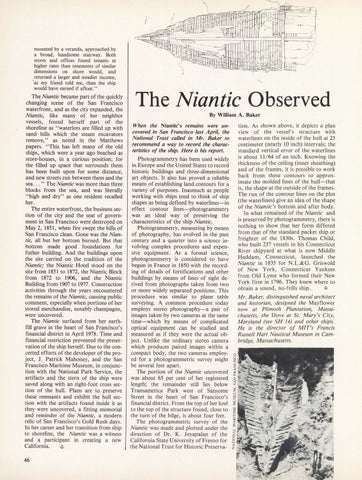 mounted by a veranda, approached by a broad, handsome stairway. Both stores and offices found tenants at higher rates than tenements of similar dimensions on shore would, and returned a larger and steadier income, &#39;as my friend told me, than the ship would have earned if afloat.&quot;

The Niantic became part of the quickly changing scene of the San Francisco waterfront, and as the city expanded, the Niantic, like many of her neighbor vessels, found herself part of the shoreline as &quot;waterlots are filled up with sand hills which the steam excavators remove,&quot; as noted in the Matthews papers. &quot;This has left many of the old ships, which were a year ago beached as store-houses, in a curious position; for the filled up space that surrounds them has been built upon for some distance, and new streets run between them and the sea . . . &quot;The Niantic was more than three blocks from the sea, and was literally &quot;high and dry&quot; as one resident recalled her. The entire waterfront, the business section of the city and the seat of government in San Francisco were destroyed on May 2, 1851, when fire swept the hills of San Francisco clean. Gone was the Niantic, all but her bottom burned. But that bottom made good foundations for futher building. And the buildings upon the site carried on the tradition of the Niantic; the Niantic Hotel stood on the site from 1851 to 1872, the Niantic Block from 1872 to 1906, and the Niantic Building from 1907 to 1977. Construction activities through the years encountered the remains of the Niantic, causing public comment, especially when portions of her stored merchandise, notably champagne, were uncovered. The Niantic surfaced from her earthfill grave in the heart of San Francisco&#39;s financial district in April 1978. Time and financial restriction prevented the preservation of the ship herself. Due to the concerted efforts of the developer of the project, J . Patrick Mahoney, and the San Francisco Maritime Museum, in conjunction with the National Park Service, the artifacts and the stern of the ship were saved along with an eight-foot cross section of the hull. Plans are to preserve these remnants and exhibit the hull section with the artifacts found inside it as they were uncovered, a fitting memorial and reminder of the Niantic, a modern relic of San Francisco&#39;s Gold Rush days. In her career and her transition from ship to shoreline, the Niantic was a witness and a participant in creating a new California. .ti 46

The Niantic Observed By William A. Baker

When the Niantic&#39;s remains were untion. As shown above, it depicts a plan view of the vessel&#39;s structure with covered in San Francisco last April, the waterlines on the inside of the hull at 25 National Trust called in Mr. Baker to centimeter (nearly 10 inch) intervals; the recommend a way to record the characteristics of the ship. Here is his report. standard vertical error of the waterlines is about 11 / 64 of an inch. Knowing the Photogrammetry has been used widely thickness of the ceiling (inner sheathing) in Europe and the United States to record of the frames, it is possible to work and historic buildings and three-dimensional back from these contours to approxart objects. It also has proved a reliable imate the molded lines of the hull-that means of establishing land contours for a is, the shape at the outside of the frames. variety of purposes. Inasmuch as people The run of the contour lines on the plot working with ships tend to think of ship (the waterlines) give an idea of the shape shapes as being defined by waterlines-in of the Niantic&#39;s bottom and after body. effect contour lines-photogrammetry In what remained of the Niantic and was an ideal way of preserving the is preserved by photogrammetry, there is characteristics of the ship Niantic. nothing to show that her form differed Photogrammetry, measuring by means from that of the standard packet ship or of photography, has evolved in the past freighter of the 1830s. Thomas Child, century and a quarter into a science inwho built 237 vessels in his Connecticut volving complex procedures and expenRiver shipyard at what is now Middle sive equipment. As a formal science, Haddam, Connecticut, launched the photogrammetry is considered to have Niantic in 1835 for N.L.&amp;G. Griswold begun in France in 1850 with the recordof New York, Connecticut Yankees ing of details of fortifications and other from Old Lyme who formed their New buildings by means of lines of sight deYork firm in 1796. They knew where to rived from photographs taken from two obtain a sound, no-frills ship. .ti or more widely separated positions. This procedure was similar to plane table Mr. Baker, distinguished naval architect surveying. A common procedure today and historian, designed the Mayflower employs stereo photography-a pair of now at Plimoth Plantation, Massaimages taken by two cameras at the same chusetts, the Dove at St. Mary&#39;s City, Maryland (see SH 14) and other ships. time-which by means of complicated He is the director of MIT&#39;s Francis optical equipment can be studied and Russell Hart Nautical Museum in Cammeasured as if they were the actual obbridge, Massachusetts. ject. Unlike the ordinary stereo camera which produces paired images within a compact body, the two cameras employed for a photogrammetric survey might be several feet apart. The portion of the Niantic uncovered was about 65 per cent of her registered length; the remainder still lies below Transamerica Park west of Sansome Street in the heart of San Francisco&#39;s financial district. From the top of her keel to the top of the structure found, close to ~ the turn of the bilge, is about four feet. E The photogrammetric survey of the

Niantic was made and plotted under the direction of Dr. K. Jeyapalan of the California State University of Fresno for the National Trust for Historic Preserva-