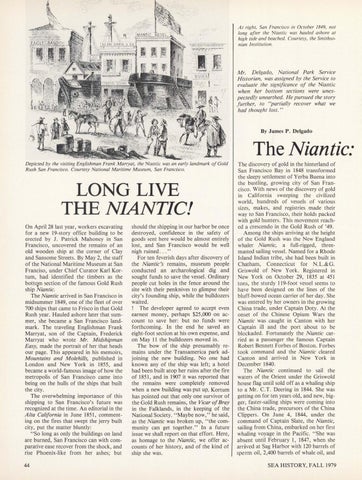 At right, San Francisco in October 1849, not long after the Niantic was hauled ashore at high tide and beached. Courtesy, the Smithsonian Institution.

Mr. Delgado, National Park Service Historian, was assigned by the Service to evaluate the significance of the Niantic when her bottom sections were unexpectedly unearthed. He pursued the story further, to &quot;partia//y recover what we had thought lost. &quot;

LONG LIVE THE NIANTIC! On April 28 last year, workers excavating for a new 19-story office building to be erected by J . Patrick Mahoney in San Francisco, uncovered the remains of an old wooden ship at the corner of Clay and Sansome Streets. By May 2, the staff of the National Maritime Museum at San Franciso, under Chief Curator Karl Kortum, had identified the timbers as the bottqm section of the famous Gold Rush ship Niantic. The Niantic arrived in San Francisco in midsummer 1849, one of the fleet of over 700 ships that came to Frisco in that Gold Rush year. Hauled ashore later that summer, she became a San Francisco landmark. The traveling Englishman Frank Marryat, son of the Captain, Frederick Marryat who wrote Mr. Midshipman Easy, made the portrait of her that heads our page. This appeared in his memoirs, Mountains and Molehills, published in London and New York in 1855, and became a world-famous image of how the metropolis of San Francisco came into being on the hulls of the ships that built the city. The overwhelming importance of this shipping to San Francisco&#39;s future was recognized at the time. An editorial in the Alta California in June 1851, commenting on the fires that swept the jerry built city, put the matter bluntly: &quot;So long as only the buildings on land are burned, San Francisco can with comparative ease recover from the shock, and rise Phoenix-like from her ashes; but 44

should the shipping in our harbor be once destroyed, confidence in the safety of goods sent here would be almost entirely lost, and San Francisco would be well nigh ruined ... &quot; For ten feverish days after discovery of the Niantic&#39;s remains, museum people conducted an archarological dig and sought funds to save the vessel. Ordinary people cut holes in the fence around the site with their penknives to glimpse their city&#39;s founding ship, while the bulldozers waited. ! The developer agreed to accept even earnest money, perhaps $25,000 on account to save her: but no funds were forthcoming. In the end he saved an eight-foot section at his own expense, and on May 11 the bulldozers moved in. The bow of the ship presumably remains under the Transamerica park adjoining the new building. No one had known any of the ship was left; a hotel had been built atop her ruins after the fire of 1851, and in 1907 it was reported that the remains were completely removed when a new building was put up. Kortum has pointed out that only one survivor of the Gold Rush remains, the Vicar of Bray in the Falklands, in the keeping of the National Society. &quot;Maybe now,&quot; he said, as the Niantic was broken up, &quot;the community can get together.&quot; In a future issue we shall report on that effort. Here, as homage to the Niantic, we offer accounts of her history, and of the kind of ship she was.

The discovery of gold in the hinterland of San Francisco Bay in 1848 transformed the sleepy settlement of Yerba Buena into the bustling, growing city of San Francisco. With news of the discovery of gold in California sweeping the civilized world, hundreds of vessels of various sizes, makes, and registries made their way to San Francisco, their holds packed with gold hunters. This movement reached a crescendo in the Gold Rush of &#39;49. Among the ships arriving at the height of the Gold Rush was the New England whaler Niantic, a full-rigged, threemasted sailing vessel. Named for a Rhode Island Indian tribe, she had been built in Chatham, Connecticut for N.L.&amp;G. Griswold of New York. Registered in New York on October 29, 1835 at 451 tons, the sturdy 119-foot vessel seems to have been designed on the lines of the bluff-bowed ocean carrier of her day. She was entered by her owners in the growing China trade, under Captain Doty. At the onset of the Chinese Opium Wars the Niantic was caught in Canton with her Captain ill and the port about to be blockaded. Fortunately the Niantic carried as a passenger the famous Captain Robert Bennett Forbes of Boston. Forbes took command and the Niantic cleared Canton and arrived in New York in December 1840. The Niantic continued to sail the waters of the Orient under the Griswold house flag until sold off as a whaling ship to a Mr. C.T. Deering in 1844. She was getting on for ten years old, and new, bigger, faster-sailing ships were coming into the China trade, precursors of the China Clippers. On June 4, 1844, under the command of Captain Slate, the Niantic, sailing from China, embarked on her first whaling voyage in the Pacific. &quot;She was absent until February 1, 1847, when she arrived at Sag Harbor with 120 barrels of spe:rm oil, 2,400 barrels of whale oil, and SEA HISTORY, FALL 1979