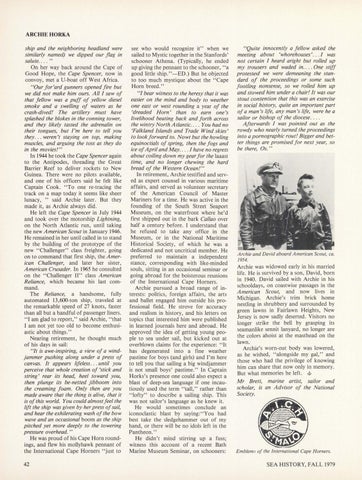 ship and the neighboring headland were similarly named) we dipped our flag in salute.. .. &quot; On her way back around the Cape of Good Hope, the Cape Spencer, now in convoy, met a U-boat off West Africa. &quot;Our for&#39;ard gunners opened fire but we did not make him ours. All I saw of that fellow was a puff of yellow diesel smoke and a swelling of waters as he crash-dived! The artillery must have splashed the blokes in the conning tower, and they likely tasted the adrenalin on their tongues, but I&#39;m here to tell you they . .. weren&#39;t staying on top, making muscles, and arguing the toss as they do in the movies!&quot; In 1944 he took the Cape Spencer again to the Antipodes, threading the Great Barrier Reef to deliver rockets to New Guinea. There were no pilots available, and one of his officers said he felt like Captain Cook. &quot;To one re-tracing the track on a map today it seems like sheer lunacy, &quot; said Archie later. But they made it, as Archie always did. He left the Cape Spencer in July 1944 and took over the motorship Lightning, on the North Atlantic run, until taking the new American Scout in January 1946. He remained in her until called in to stand by the building of the prototype of the new &quot;Challenger&quot; class freighter, going on to command that first ship, the American Challenger, and later her sister, American Crusader. In 1965 he consulted on the &quot;Challenger II&quot; class American Reliance, which became his last command. The Reliance, a handsome, fully automated 13 ,600-ton ship, traveled at the remarkable speed of 27 knots, faster than all but a handful of passenger liners. &quot;I am glad to report,&quot; said Archie, &quot;that I am not yet too old to become enthusiastic about things.&quot; Nearing retirement, he thought much of his days in sail: &quot;It is awe-inspiring, a view of a windjammer pushing along under a press of canvas. It appears lifeless ... until you perceive that whole creation of &#39;stick and string&#39; rear its head, heel toward you, then plunge its be-netted jibboom into the creaming foam. Only then are you made aware that the thing is alive, that it is of this world. You could almost feel the lift the ship was given by her press of sail, and hear the exhilerating wash of the bow wave and an occasional boom as the ship pitched yet more deeply to the towering pressure overhead. &quot; He was proud of his Cape Horn roundings, and flew his mollyhawk pennant of the International Cape Homers &quot;just to 42

see who would recognize it&quot; when we sailed to Mystic together in the Stanfords&#39; schooner Athena. (Typically, he ended up giving the pennant to the schooner, &quot;a good little ship.&quot;-ED.) But he objected to too much mystique about the &quot;Cape Horn breed.&quot; &quot;I bear witness to the heresy that it was easier on the mind and body to weather one east or west rounding a year of the &#39;dreaded Horn&#39; than to earn one&#39;s livelihood beating back and forth across the wintry North Atlantic... . You had no &#39;Falkland Islands and Trade Wind skies&#39; to look forward to. Nowt but the howling equinoctials of spring, then the fogs and ice of April and May . .. . I have no regrets about coiling down my gear for the laaast time, and no longer chewing the hard bread of the Western Ocean!&quot; In retirement, Archie testified and served as expert counsel in various maritime affairs, and served as volunteer secretary of the American Council of Master Mariners for a time. He was active in the founding of the South Street Seaport Museum, on the waterfront where he&#39;d first shipped out in the bark Callao over half a century before. I understand that he refused to take any office in the Museum, or in the National Maritime Historical Society, of which he was a dedicated and not uncritical member. He preferred to maintain a independent stance, corresponding with like-minded souls, sitting in an occasional seminar or going abroad for the boisterous reunions of the International Cape Homers. Archie pursued a broad range of interests: politics, foreign affairs, the arts and ballet engaged him outside his professional field. He strove for accuracy and realism in history, and his letters on topics that interested him were published in learned journals here and abroad. He approved the idea of getting young people to sea under sail, but kicked out at overblown claims for the experience: &quot;It has degenerated into a fine weather pastime for boys (and girls) and I&#39;m here to tell you that sailing a big windjammer is not small boys&#39; pastime.&quot; In Captain Horks&#39;s presence one could also expect a blast of deep-sea language if one incautiously used the term &quot;tall,&quot; rather than &quot;lofty&quot; to describe a sailing ship. This was not sailor&#39;s language as he knew it. He would sometimes conclude an iconoclastic blast by saying: &quot;You had best take the sledgehammer out of my hand, or there will be no idols left in the Pantheon.&quot; He didn&#39;t mind stirring up a fuss; witness this account of a recent Bath Marine Museum Seminar, on schooners:

&quot;Quite innocently a fellow asked the meeting about &#39;whorehouses&#39; . .. I was not certain I heard aright but rolled up my trousers and waded in . ... One stiff protested we were demeaning the standard of the proceedings or some such footling nonsense, so we rolled him up and stowed him under a chair! It was our stout contention that this was an exercise in social history, quite an important part of a man &#39;s life, any man &#39;s life, were he a sailor or bishop of the diocese . ... Afterwards I was pointed out as the rowdy who nearly turned the proceedings into a pornographic rout! Bigger and better things are promised for next year, so be there, Os. &quot;

Archie was widowed early in his married life. He is survived by a son, David, born in 1940. David sailed with Archie in his schooldays, on coastwise passages in the American Scout, and now lives in Michigan . Archie&#39;s trim brick home nestling in shrubbery and surrounded by green lawns in Fairlawn Heights, New Jersey is now sadly deserted . Visitors no longer strike the bell by grasping its seamanlike sennit lanyard, no longer are the colors ahoist at the masthead on the lawn. Archie&#39;s worn-out body was lowered, as he wished, &quot;alongside my gal,&quot; and those who had the privilege of knowing him can share that now only in memory. But what memories he left. &lt;lJ Mr Brett, marine artist, sailor and scholar, is an Advisor of the National Society.

Emblem1 of the International Cape Homers.