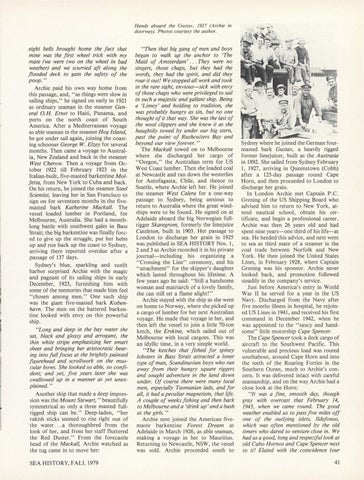 Hands aboard the Gustav , 1927 (Archie in doorway). Photos courtesy the author.

eight bells brought home the fact that mine was the first wheel trick with my mate (we were two on the wheel in bad weather) and we scurried aft along the flooded deck to gain the safety of the poop.&quot; Archie paid his own way home from this passage, and, &quot;as things were slow in sailing ships,&quot; he signed on early in 1921 as ordinary seaman in the steamer General O.H. Ernst to Haiti, Panama, and ports on the north coast of South America. After a Mediterranean voyage as able seaman in the steamer Hog Island, he got under sail again, joining the coasting schooner George W. Elzey for several months. Then came a voyage to Australia, New Zealand and back in the steamer West Cheraw. Then a voyage from October 1922 till February 1923 in the Italian-built, five-masted barkentine Molfetta, from New York to Cuba and back. On his return, he joined the steamer Steel Scientist, leaving her in San Francisco to sign on for seventeen months in the fivemasted bark Katherine Mackall. The vessel loaded lumber in Portland, for Melbourne, Australia. She had a monthlong battle with southwest gales in Bass Strait; the big barkentine was finally forced to give up the struggle, put her helm up and run back up the coast to Sydney, arriving there reported overdue after a passage of 137 days. Sydney&#39;s blue, sparkling and sunlit harbor surprised Archie with the magic and pageant of its sailing ships in early December, 1923, furnishing him with some of the memories that made him feel &quot;chosen among men.&quot; One such ship was the giant five-masted bark Kobenhavn. The men on the battered barkentine looked with envy on this powerful ship. &quot;Long and deep in the bay water she sat, black and glossy and arrogant, the thin white stripe emphasizing her smart sheer and bringing her aristocratic bearing into full focus at the brightly painted figurehead and scrollwork on the muscular bows. She looked so able, so confident; and yet, five years later she was swallowed up in a manner as yet unexplained.&quot; Another ship that made a deep impression was the Mount Stewart,&quot; beautifully symmetrical as only a three masted fullrigged ship can be.&quot; Deep-laden, &quot;her rakish sticks seemed to rise right out of the water . . . a thoroughbred from the look of her, and from her staff fluttered the Red Duster.&quot; From the forecastle head of the Mackall, Archie watched as the tug came in to move her: SEA HISTORY, FALL 1979

&quot;Then that big gang of men and boys began to walk up the anchor to &#39;The Maid of Amsterdam&#39; .. . They were no singers, those chaps, but they had the words, they had the spirit, and did they roar it out! We stopped all work and took in the rare sight, envious-sick with envy of those chaps who were privileged to sail in such a majestic and gallant ship. Being a &#39;Limey&#39; and holding to tradition, she was probably hungry as sin, but no one thought of it that way. She was the last of the wool clippers and she knew it as she haughtily towed by under our big stern, past the point of Rushcutters Bay and beyond our view forever. &quot; The Mackall towed on to Melbourne where she discharged her cargo of &quot;Oregon,&quot; the Australian term for US West Coast lumber. Then she loaded coal at Newcastle and ran down the westerlies for Antofagasta, Chile, and thence to Seattle, where Archie left her. He joined the steamer West Calera for a one-way passage to Sydney, being anxious to return to Australia where the great windships were to be found. He signed on at Adelaide aboard the big Norwegian fullrigger Skaregrom, formerly the limejuice Castleton, built in 1903. Her passage to London to discharge her grain in 1925 was published in SEA HISTORY Nos. 1, 2 and 3 as Archie recorded it in his private journal-including his organizing a &quot;Crossing the Line&quot; ceremony, and his &quot;attachment&quot; for the skipper&#39;s daughter which lasted throughout his lifetime. A few years ago he said: &quot;Still a handsome woman and matriarch of a lovely family, she can still set a flame alight!&quot; Archie stayed with the ship as she went on home to Norway, where she picked up a cargo of lumber for her next Australian voyage. He made that voyage in her, and then left the vessel to join a little 70-ton ketch, the Erskine, which sailed out of Melbourne with local cargoes. This was an idyllic time, in a very simple world. &quot;The ketches that fished for spiney lobsters in Bass Strait attracted a loner type of man, Scandinavian boys who ran away from their hungry square riggers and sought adventure in the land down under. Of course there were many local men, especially Tasmanian lads, and for all, it had a peculiar magnetism, that life. A couple of weeks fishing and then back to Melbourne and a &#39;drink up&#39; and a bash at the girls. &quot; Archie next joined the American fivemaste barkentine Forest Dream at Adelaide in March 1926, as able seaman, making a voyage in her to Mauritius . Returning to Newcastle, NSW, the vessel was sold. Archie proceeded south to

Sydney where he joined the German fourmasted bark Gustav, a heavily rigged former limejuicer, built as the Austrasia in 1892. She sailed from Sydney February I, 1927, arriving in Queenstown (Cobh) after a 123-day passage round Cape Horn, and then proceeded to London to discharge her grain. In London Archie met Captain P.C. Grening of the US Shipping Board who advised him to return to New York, attend nautical school, obtain his certificate, and begin a professional career. Archie was then 26 years old and had spent nine years-one third of his life-at sea. He heeded this advice, and next went to sea as third mate of a steamer in the coal trade between Norfolk and New York. He then joined the United States Lines, in February 1928, where Captain Grening was his sponsor. Archie never looked back, and promotion followed steadily in the company&#39;s service. Just before America&#39;s entry in World War II he served for a year in the US Navy. Discharged from the Navy after five months illness in hospital, he rejoined US Lines in 1941, and received his first command in December 1942, when he was appointed to the &quot; saucy and handsome&quot; little motorship Cape Spencer. The Cape Spencer took a deck cargo of aircraft to the Southwest Pacific. This vulnerable and precious load was routed southabout, around Cape Horn and into the teeth of the Roaring Forties in the Southern Ocean, much to Archie&#39;s concern. It was delivered intact with careful seamanship, and on the way Archie had a close look at the Horn: &quot; It was a fine, smooth day, though gray with overcast that February 14, 1943, when we came round. The good weather enabled us to pass five miles off one of the outlying islets, Ildefonso, which was often mentioned by the old timers who dared to venture close in. We had us a good, long and respectful look at old Caba Harnos and Cape Spencer next to it! Elated with the coincidence (our 41