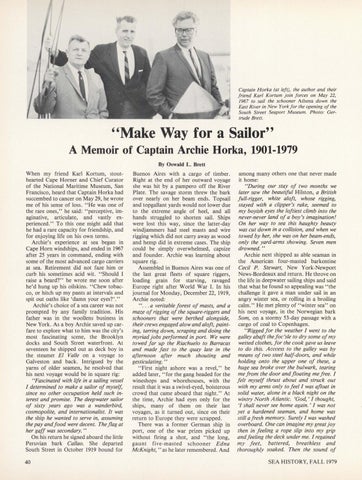 Captain Horka (at left), the author and their friend Karl Kortum join forces on May 22, 1967 to sail the schooner Athena down the East River in New York for the opening of the South Street Seaport Museum. Photo: Gertrude Brett.

&#39;&#39;Make Way for a Sailor&#39;&#39; A Memoir of Captain Archie Horka, 1901-1979 By Oswald L. Brett When my friend Karl Kortum, stouthearted Cape Horner and Chief Curator of the National Maritime Museum, San Francisco, heard that Captain Horka had succembed to cancer on May 29, he wrote me of his sense of loss. &quot;He was one of the rare ones,&quot; he said: &quot;perceptive, imaginative, articulate, and vastly experienced.&quot; To this one might add that he had a rare capacity for friendship, and for enjoying life on his own terms. Archie&#39;s experience at sea began in Cape Horn windships, and ended in 1967 after 25 years in command, ending with some of the most advanced cargo carriers at sea. Retirement did not faze him or curb his sometimes acid wit. &quot;Should I raise a beard?&quot; he wrote me soon after he&#39;d hung up his oilskins. &quot;Chew tobacco, or hitch up my pants at intervals and spit out oaths like &#39;damn your eyes?&#39;.&quot; Archie&#39;s choice of a sea career was not prompted by any family tradition. His father was in the woollens business in New York. As a boy Archie saved up carfare to explore what to him was the city&#39;s most fascinating scene, the Brooklyn docks and South Street waterfront. At seventeen he shipped out as deck boy in the steamer El Valle on a voyage to Galveston and back. Intrigued by the yarns of older seamen, he resolved that his next voyage would be in square rig: &quot;Fascinated with life in a sailing vessel I determined to make a sailor of myself, since no other occupation held such interest and promise. The deepwater sailor of sixty years ago was a wanderbird, cosmopolite, and internationalist. It was the ship he wanted to serve in, assuming the pay and food were decent. The flag at her gaff was secondary. &quot; On his return he signed aboard the little Peruvian bark Callao. She departed South Street in October 1919 bound for

Buenos Aires with a cargo of timber. Right at the end of her outward voyage she was hit by a pampero off the River Plate. The savage storm threw the bark over nearly on her beam ends. Topsail and topgallant yards would not lower due to the extreme angle of heel, and all hands struggled to shorten sail. Ships were lost this way, since the latter-day windjammers had steel masts and wire rigging which did not carry away as wood and hemp did in extreme cases. The ship could be simply overwhelmed, capsize and founder. Archie was learning about square rig. Assembled in Buenos Aires was one of the last great fleets of square riggers, loading grain for starving, ravaged Europe right after World War I. In his journal for Monday, December 22, 1919, Archie noted: &quot; . . . a veritable forest of masts, and a maze of rigging of the square-riggers and schooners that were berthed alongside, their crews engaged a/ow and aloft, painting, tarring down, scraping and doing the myriad jobs performed in port. We were towed far up the Riachuelo to Barracas and made fast to the quay late in the afternoon after much shouting and gesticulating. &quot; &quot;First night ashore was a revel,&quot; he added later, &quot;for the gang headed for the wineshops and whorehouses, with the result that it was a swivel-eyed, boisterous crowd that came aboard that night.&quot; At the time, Archie had eyes only for the ships, many of them on their Âˇlast voyages, as it turned out, since on their return to Europe they were scrapped. There was a former German ship in port, one of the war prizes picked up without firing a shot, and &quot;the long, gaunt five-masted schooner Edna McKnight, &quot;as he later remembered. And

among many others one that never made it home: &quot;During our stay of two months we later saw the beautiful Hilston, a British full-rigger, white aloft, whose rigging, stayed with a clipper&#39;s rake, seemed to my boyish eyes the loftiest climb into the never-never land of a boy&#39;s imagination! On her way to sea this haughty beauty was cut down in a collision, and when we towed by her, she was on her beam-ends, only the yard-arms showing. Seven men drowned.&quot; Archie next shipped as able seaman in the American four-masted barkentine Cecil P. Stewart, New York-Newport News-Bordeaux and return. He throve on the life in deepwater sailing ships and said that what he found so appealing was &quot;the challenge it gave a man under sail in an angry winter sea, or rolling in a broiling calm.&quot; He met plenty of &quot;winter sea&quot; on his next voyage, in the Norwegian bark Som, on a stormy 53-day passage with a cargo of coal to Copenhagen. &quot;Rigged for the weather I went to the galley abaft the foc&#39;sle to dry some of my wetted clothes, for the cook gave us leave to do this. Acccess to the galley was by means of two steel half-doors, and while holding onto the upper one of these, a huge sea broke over the bulwark, tearing me from the door and floating me free. I felt myself thrust about and struck out with my arms only to feel I was afloat in solid water, alone in a black night on the wintry North Atlantic. &#39;God,&#39; I thought, &#39;I shall never see home again. &#39; I was not yet a hardened seaman, and home was still a fresh memory. Surely I was washed overboard. One can imagine my great joy then in feeling a rope slip into my grip and feeling the deck under me. I regained my feet, battered, breathless and thoroughly soaked. Then the sound of SEA HISTORY, FALL 1979