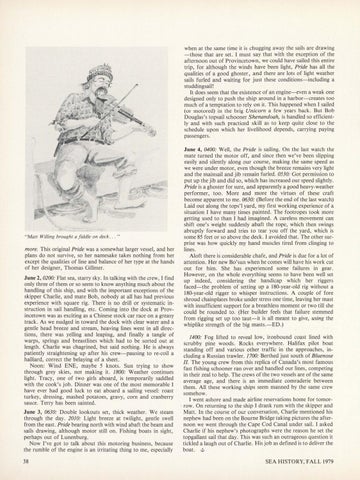 when at the same time it is chugging away the sails are drawing -those that are set. I must say that with the exception of the afternoon out of Provincetown, we could have sailed this entire trip, for although the winds have been light, Pride has all the qualities of a good ghoster, and there are lots of light weather sails furled and waiting for just these conditions-including a studdingsail ! It does seem that the existence of an engine-even a weak one designed only to push the ship around in a harbor-creates too much of a temptation to rely on it. This happened when I sailed (or motored) in the brig Unicorn a few years back. But Bob Douglas&#39;s topsail schooner Shenandoah, is handled so efficiently and with such practiced skill as to keep quite close to the schedule upon which her livelihood depends, carrying paying passengers.

more. This original Pride was a somewhat larger vessel, and her plans do not survive, so her namesake takes nothing from her except the qualities of line and balance of her type at the hands of her designer, Thomas Gillmer. June 2, 0200: Flat sea, starry sky. In talking with the crew, I find only three of them or so seem to know anything much about the handling of this ship, and with the important exceptions of the skipper Charlie, and mate Bob, nobody at all has had previous experience with square rig. There is no drill or systematic instruction in sail handling, etc. Coming into the dock at Provincetown was as exciting as a Chinese stock car race on a greasy track. As we nudged in toward the dock with clear water and a gentle head breeze and stream, heaving lines went in all directions, there was yelling and leaping, and finally a tangle of warps, springs and breastlines which had to be sorted out at length . Charlie was chagrined, but said nothing. He is always patiently straightening up after his crew-pausing to re-coil a halliard, correct the belaying of a sheet. Noon: Wind ENE, maybe 5 knots. Sun trying to show through grey skies, not making it. 1800: Weather continues light. Tracy, one of two girls aboard, is temporarily saddled with the cook&#39;s job. Dinner was one of the most memorable I have ever had good luck to eat aboard a sailing vessel: roast turkey, dressing, mashed potatoes, gravy, corn and cranberry sauce. Terry has been sainted . June 3, 0630: Double lookouts set, thick weather. We steam through the day. 2010: Light breeze at twilight, gentle swell from the east. Pride bearing north with wind abaft the beam and sails drawing, although motor still on. Fishing boats in sight, perhaps out of Lunenburg. Now I&#39;ve got to talk about this motoring business, because the rumble of the engine is an irritating thing to me, especially

June 4, 0400: Well, the Pride is sailing. On the last watch the mate turned the motor off, and since then we&#39;ve been slipping easily and silently along our course, making the same speed as we were under motor, even though the breeze remains very light and the mainsail and jib remain furled. 0530: Got permission to put up the jib and did so, which has increased our speed slightly. Pride is a ghoster for sure, and apparently a good heavy-weather performer, too. More and more the virtues of these craft become apparent to me. 0630: (Before the end of the last watch) Laid out along the tops&#39;! yard, my first working experience of a situation I have many times painted. The footropes took more getting used to than I had imagined . A careless movement can shift one&#39;s weight suddenly abaft the rope, which then swings abruptly forward and tries to tear you off the yard, which is some 85 feet or so above the deck . I avoided that. The other surprise was how quickly my hand muscles tired from clinging to lines. Aloft there is considerable chafe, and Pride is due for a lot of attention. Her new Bo&#39;sun when he comes will have his work cut out for him. She has experienced some failures in gear. However, on the whole everything seems to have been well set up indeed, considering the handicap which her riggers faced-the problem of setting up a 180-year-old rig without a 180-year-old rigger to whisper instructions. A couple of fore shroud chainplates broke under stress one time, leaving her mast with insufficient support for a breathless moment or two till she could be rounded to. (Her builder feels that failure stemmed from rigging set up too taut-it is all meant to give, using the whiplike strength of the big masts.-ED.)

1400: Fog lifted to reveal low, ironbound coast lined with scrubby pine woods. Rocks everywhere. Halifax pilot boat standing off and various other traffic in the approaches, including a Russian trawler. 1700: Berthed just south of Bluenose II. The young crew from this replica of Canada&#39;s most famous fast fishing schooner ran over and handled our lines, competing in their zeal to help. The crews of the two vessels are of the same average age, and there is an immediate comraderie between them. All these working ships seem manned by the same crew somehow. I went ashore and made airline reservations home for tomor, row. On returning to the ship I drank rum with the skipper and Matt. In the course of our conversation, Charlie mentioned his nephew had been on the Bourne Bridge taking pictures the afternoon we went through the Cape Cod Canal under sail. I asked Charlie if his nephew&#39;s photographs were the reason he set the topgallant sail that day. This was such an outrageous question it tickled a laugh out of Charlie. His job as defined is to deliver the boat. w SEA HISTORY, &#39;FALL 1979