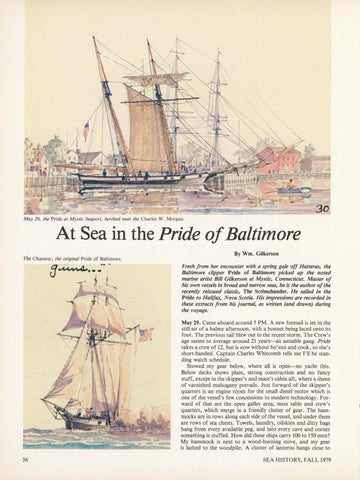 May 29, the Pride at Mystic Seaport, berthed near the Charles W. Morgan .

Fresh from her encounter with a spring gale off Hatteras, the Baltimore clipper Pride of Baltimore picked up the noted marine artist Bill Gilkerson at Mystic, Connecticut. Master of his own vessels in broad and narrow seas, he is the author of the recently reissued classic, The Scrimshander. He sailed in the Pride to Halifax, Nova Scotia. His impressions are recorded in these extracts from his journal, as written (and drawn) during the voyage. May 29. Came aboard around 5 PM. A new foresail is set in the still air of a balmy afternoon, with a bonnet being laced onto its foot. The previous sail blew out in the recent storm. The Crew&#39;s age seems to average around 21 years-an amiable gang. Pride takes a crew of 12, but is now without bo&#39;sun and cook, so she&#39;s short-handed. Captain Charles Whitcomb tells me I&#39;ll be standing watch schedule. Stowed my gear below, where all is open-no yacht this. Below decks shows plain, strong construction and no fancy stuff, except in the skipper&#39;s and mate&#39;s cabin aft, where a sheen of varnished mahogany prevails. Just forward of the skipper&#39;s quarters is Âˇan engine room for the small diesel motor which is one of the vessel&#39;s few concessions to modern technology. Forward of that are the open galley area, mess table and crew&#39;s quarters, which merge in a friendly clutter of gear. The hammocks are in rows along each side of the vessel, and under them are rows of sea chests. Towels, laundry, oilskins and ditty bags hang from every available peg, and into every cave and corner something is stuffed. How did these ships carry 100 to 150 men? My hammock is next to a wood-burning stove, and my gear is lashed to the woodpile. A cluster of lanterns hangs close to 36