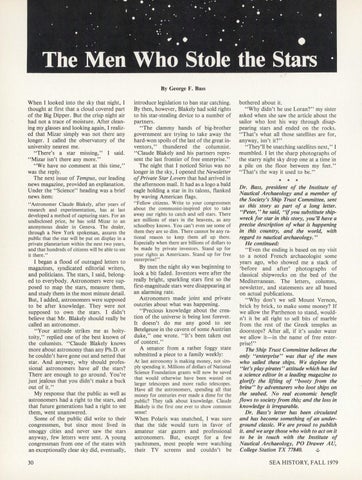 By George F. Bass When I looked into the sky that night, I thought at first that a cloud covered part of the Big Dipper. But the crisp night air had not a trace of moisture. After cleaning my glasses and looking again, I realized that Mizar simply was not there any longer. I called the observatory of the university nearest me. &quot;There&#39;s a star missing,&quot; I said. &quot;Mizar isn&#39;t there any more.&quot; &quot;We have no comment at this time,&quot; was the reply. The next issue of Tempus, our leading news magazine, provided an explanation. Under the &quot;Science&quot; heading was a brief news item:

introduce legislation to ban star catching. By then, however, Blakely had sold rights to his star-stealing device to a number of partners. &quot;The clammy hands of big-brother government are trying to take away the hard-won spoils of the last of the great inventors,&quot; thundered the columnist. &quot;Claude Blakely and his partners represent the last frontier of free enterprise.&quot; The night that I noticed Sirius was no longer in the sky, I opened the Newsletter of Private Star Lovers that had arrived in the afternoon mail. It had as a logo a bald eagle holding a star in its talons, flanked by waving American flags .

&quot;Astronomer Claude Blakely, after years of research and experimentation, has at last developed a method of capturing stars. For an undisclosed price, he has sold Mizar to an anonymous dealer in Geneva. The dealer, through a New York spokeman, assures the public that the star will be put on display in a private planetarium within the next two years, and that hundreds of citizens will be able to see it there.&quot;

&quot;Fellow citizens . Write to your congressmen about the communist-inspired plot to take away our rights to catch and sell stars. There are millions of stars in the heavens , as any schoolboy knows . You can&#39;t even see some of them they are so dim. There cannot be any rational reason to keep them all up there. Especially when there are billions of dollars to be made by private investors . Stand up for your rights as Americans. Stand up for free enterprise!&quot;

I began a flood of outraged letters to magazines, syndicated editorial writers, and politicians. The stars, I said, belonged to everybody. Astronomers were supposed to map the stars, measure them, and study them in the most minute detail. But, I added, astronomers were supposed to be after knowledge. They were not supposed to own the stars. I didn&#39;t believe that Mr. Blakely should really be called an astronomer. &quot;Your attitude strikes me as hoitytoity,&#39;&#39; replied one of the best known of the columists. &quot;Claude Blakely knows more about astronomy than any Ph.D. or he couldn&#39;t have gone out and netted that star. And anyway, why should professional astronomers have all the stars? There are enough to go around. You&#39;re just jealous that you didn&#39;t make a buck out of it.&quot; My response that the public as well as astronomers had a right to the stars, and that future generations had a right to see them, went unanswered . Some of the public did write to their congressmen, but since most lived in smoggy cities and never saw the stars anyway, few letters were sent. A young congressman from one of the states with an exceptionally clear sky did, eventually,

By tnen the night sky was beginning to look a bit faded. Investors were after the really bright, sparkling stars first so the first-magnitude stars were disappearing at an alarming rate. Astronomers made joint and private outcries about what was happening. &quot;Precious knowledge about the creation of the universe is being lost forever. It doesn&#39;t do me any good to see Betelgeuse in the cavern of some Austrian duke,&quot; one wrote. &quot; It&#39;s been taken out of context.&#39;&#39; A senator from a rather foggy state submitted a piece to a family weekly: At last astronomy is making money, not simply spending it. Millions of dollars of National Science Foundation grants will now be saved that would otherwise have been wasted on larger telescopes and more radio telescopes. Have all the astronomers , spending all that money for centuries ever made a dime for the public? They talk about knowledge. Claude Blakely is the first one ever to show common sense!

When Polaris was snatched, I was sure that the tide would turn in favor of amateur star gazers and professional astronomers. But, except for a few yachtsmen, most people were watching their TV screens and couldn&#39;t be

bothered about it. &quot;Why didn&#39;t he use Loran?&quot; my sister asked when she saw the article about the sailor who lost his way through disappearing stars and ended on the rocks . &quot;That&#39;s what all those satellites are for, anyway, isn&#39;t it?&quot; &quot;They&#39;ll be snatching satellites next,&quot; I mumbled. I let the sharp photographs of the starry night sky drop one at a time in a pile on the floor between my feet.&quot; &quot;That&#39;s the way it used to be.&quot;

* * * Dr. Bass, president of the Institute of Nautical Archaeology and a member of the Society&#39;s Ship Trust Committee, sent us this story as part of a long letter. &quot;Peter,&quot; he said, &quot;if you substitute shipwreck for star in this story, you &#39;II have a precise description of what is happening in this country, and the world, with regard to nautical archaeology. &quot; He continued: &quot;Even the ending is based on my visit to a noted French archaeologist some years ago, who showed me a stack of &#39;before and after&#39; photographs of classical shipwrecks on the bed of the Mediterranean. The letters, columns, newsletter, and statements are all based on actual publications. &quot;Why don&#39;t we sell Mount Vernon, brick by brick, to make some money? If we allow the Parthenon to stand, wouldn&#39;t it be all right to sell bits of marble from the rest of the Greek temples as doorstops? After all, if it&#39;s under water we allow it-in the name of free enterprise!&quot; The Ship Trust Committee believes the only &quot;enterprise&quot; was that of the men who sailed these ships. We deplore the &quot;let&#39;s play pirates&quot; attitude which has led a science editor in a leading magazine to glorify the lifting of &quot;booty from the brine&quot; by adventurers who loot ships on the seabed. No real economic benefit flows to society from this; and the loss in knowledge is irreparable. Dr. Bass&#39;s letter has been circulated and has become something of an underground classic. We are proud to publish it. and we urge those who wish to act on it to be in touch with the Institute of Nautical Archaeology, PO Drawer AU, College Station TX 77840. ..ti SEA HISTORY, FALL 1979