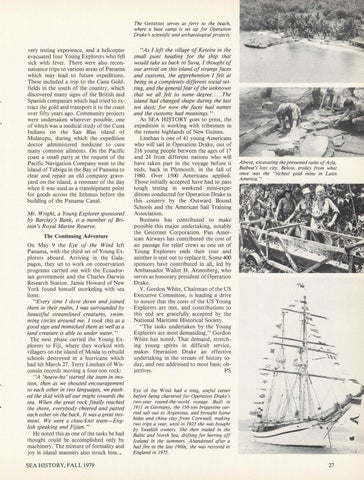 The Gestetner serves as ferry to the beach, where a base camp is set up for Operation Drake&#39;s scientific an&#39;d archaeological projects.

very testing experience, and a helicopter evacuated four Young Explorers who fell sick with fever. There were also reconnaisance trips to various areas of Panama which may lead to future expeditions. These included a trip to the Cana Goldfields in the south of the country, which discovered many signs of the British and Spanish companies which had tried to extract the gold and transport it to the coast over fifty years ago. Community projects were undertaken wherever possible, one of which was a medical study of the Cuna Indians on the San Blas island of Mulatupu, during which the expedition doctor administered medicine to cure many common ailments. On the Pacific coast a small party at the request of the Pacific Navigation Company went to the island of Taboga in the Bay of Panama to clear and repair an old company graveyard on the island, a remnant of the day when it was used as a transhipment point for goods across the Isthmus before the building of the Panama Canal. Mr. Wright, a Young Explorer sponsored by Barclay&#39;s Bank, is a member of Britain&#39;s Royal Marine Reserve. The Continuing Adventure

On May 9 the Eye of the Wind left Panama, with the third set of Young Explorers aboard. Arriving in the Galapagos, they set to work on conservation programs carried out with the Ecuadorian government and the Charles Darwin Research Station. Jamie Howard of New York found himself snorkeling with sea lions: &quot;Every time I dove down and joined them in their realm, I was surrounded by beautiful streamlined creatures, swimming circles around me. I took this as a good sign and mimicked them as well as a land creature is able to under water. &quot; The next phase carried the Young Explorers to Fiji, where they worked with villagers on the island of Moala to rebuild schools destroyed in a hurricane which had hit March 27 . Terry Linehan of Wisconsin records moving a four-ton rock: &quot;A &#39;heave-ho&#39; started the team in motion, then as we shouted encouragement to each other in two languages, we pushed the skid with all our might towards the sea. When the great rock finally reached the shore, everybody cheered and patted each other on the back. It was a great moment. We were a close-knit team-English speaking and Fijian.&quot; He noted this as one of the tasks he had thought could be accomplished only by machinery. The mixture of formality and joy in island manners also struck him. SEA HISTORY, FALL 1979

&quot;As I left the village of Keteira in the small punt heading for the ship that would take us back to Suva, I thought of our arrival on this island of strange faces and customs, the apprehension Ifelt at being in a completely different social setting, and the general fear of the unknown that we all felt to some degree . .. . The island had changed shape during the last ten days; for now the faces had names and the customs had meanings. &quot; As SEA HISTORY goes to press, the expedition is working with tribesmen in the remote highlands of New Guinea. Linehan is one of 41 young Americans who will sail in Operation Drake, out of 216 young people between the ages of 17 and 24 from different nations who will have taken part in the voyage before it ends, back in Plymouth, in the fall of 1980. Over 1500 Americans applied. Those initially accepted have had to pass tough testing in weekend mini-expeditions conducted for Operation Drake in this country by the Outward Bound Schools and the American Sail Training Association. Business has contributed to make possible this major undertaking, notably the Gestetner Corporation. Pan American Airways has contributed the cost of air passage for relief crews as one set of Young Explorers ends their tour and another is sent out to replace it. Some 400 sponsors have contributed in all, led by Ambassador Walter H. Annenberg, who serves as honorary president of Operation Drake. V. Gordon White, Chairman of the US Executive Committee, is leading a drive to assure that the costs of the US Young Explorers are met, and contributions to this end are gratefully accepted by the National Maritime Historical Society. &quot;The tasks undertaken by the Young Explorers are most demanding,&quot; Gordon White has noted. That demand, stretching young spirits in difficult service, makes Operation Drake an effective undertaking in the stream of history today, and one addressed to most basic obPS jectives.

Above, excavating the presumed ruins of Ac/a, Balboa&#39;s lost city. Below, trolley from what once was the &quot;richest gold mine in Latin America.&quot;

Eye of the Wind had a long, useful career before being chartered for Operation Drake&#39;s two-year round-the-world voyage. Built in 1911 in Germany, the 150-ton brigantine carried salt out to Argentina, and brought home hides and china clay from Cornwall, making two trips a year, until in 1923 she was bought by Swedish owners. She then traded in the Baltic and North Sea, drifting for herring off Iceland in the summers. Abandoned after a bad fire in the late 1960s, she was restored in England in 1975.