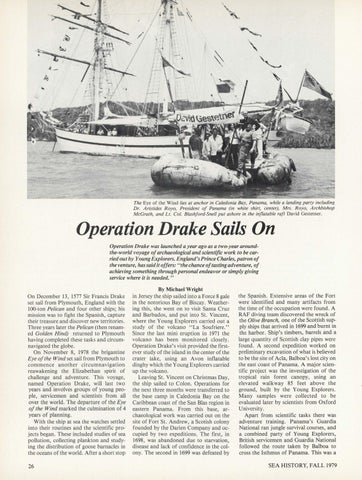 The Eye of the Wind lies at anchor in Caledonia Bay, Panama, while a landing party including Dr. Aristides Royo, President of Panama (in white shirt, center), Mrs. Royo, Archbishop McGrath, and Lt. Col. Blashford-Snell put ashore in the inflatable raft David Gestetner.

Operation Drake Sails On Operation Drake was launched a year ago as a two-year aroundthe-world voyage of archaeological and scientific work to be carried out by Young Explorers. England&#39;s Prince Charles, patron of the venture, has said it offers: &quot;the chance of tasting adventure, of achieving something through personal endeavor or simply giving service where it is needed. &quot;

On December 13, 1577 Sir Francis Drake set sail from Plymouth, England with the 100-ton Pelican and four other ships; his mission was to fight the Spanish, capture their treasure and discover new territories. Three years later the Pelican (then renamed Golden Hind) returned to Plymouth having completed these tasks and circumnavigated the globe. On November 8, 1978 the brigantine Eye of the Wind set sail from Plymouth to commence another circumnavigation reawakening the Elizabethan spirit of challenge and adventure. This voyage, named Operation Drake, will last two years and involves groups of young people, servicemen and scientists from all over the world. The departure of the Eye of the Wind marked the culmination of 4 years of planning. With the ship at sea the watches settled into their routines and the scientific projects began. These included studies of sea pollution, collecting plankton and studying the distribution of goose barnacles in the oceans of the world. After a short stop

By Michael Wright in Jersey the ship sailed into a Force 8 gale in the notorious Bay of Biscay. Weathering this, she went on to visit Santa Cruz and Barbados, and put into St. Vincent, where the Young Explorers carried out a study of the volcano &quot;La Soufriere.&quot; Since the last mini eruption in 1971 the volcano has been monitored closely. Operation Drake&#39; s visit provided the firstever study of the island in the center of the crater lake, using an Avon inflatable dinghy which the Young Explorers carried up the volcano. Leaving St. Vincent on Christmas Day, the ship sailed to Colon . Operations for the next three months were transferred to the base camp in Caledonia Bay on the Caribbean coast of the San Blas region in eastern Panama. From this base, archaeological work was carried out on the site of Fort St. Andrew, a Scotish colony founded by the Darien Company and occupied by two expeditions. The first, in 1698, was abandoned due to starvation, disease and lack of confidence in the colony. The second in 1699 was defeated by

the Spanish. Extensive areas of the Fort were identified and many artifacts from the time of the occupation were found. A RAF diving team discovered the wreck of the Olive Branch, one of the Scottish supply ships that arrived in 1699 and burnt in the harbor. Ship&#39;s timbers, barrels and a large quantity of Scottish clay pipes were found. A second expedition worked on preliminary excavation of what is believed to be the site of Acla, Balboa&#39;s lost city on the east coast of Panama. A major scientific project was the investigation of the tropical rain forest canopy, using an elevated walkway 85 feet above the ground, built by the Young Explorers. Many samples were collected to be evaluated later by scientists from Oxford University. Apart from scientific tasks there was adventure training. Panama&#39;s Guardia National ran jungle survival courses, and a combined party of Young Explorers, British servicemen and Guardia National followed the route taken by Balboa to cross the Isthmus of Panama. This was a SEA HISTORY, FALL 1979